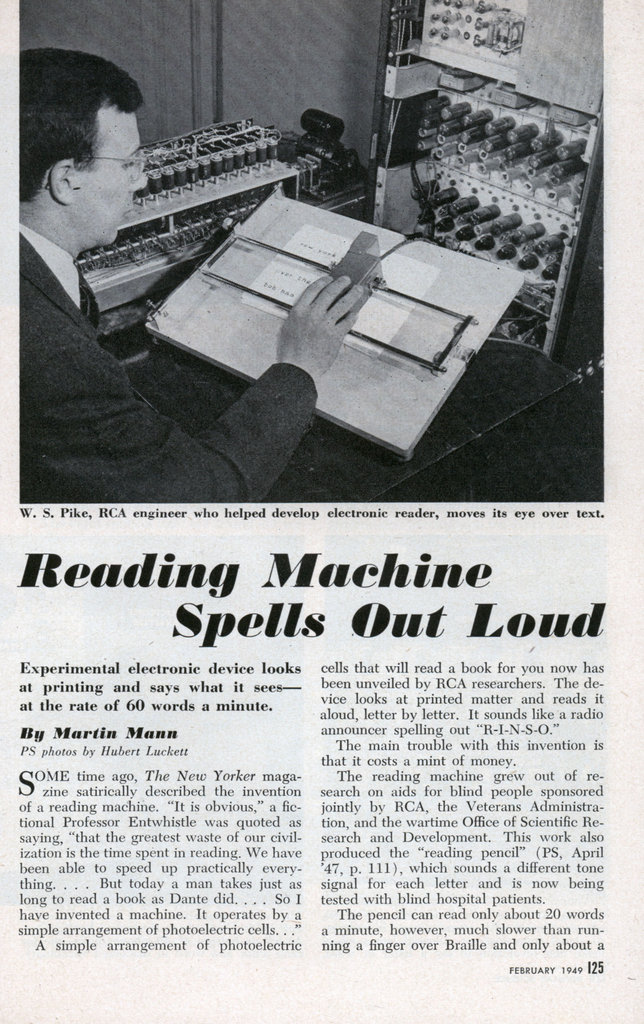 Experimental eleetronic device looks at printing and says what it sees â€” at the rate of 60 words a minute.

SOME time ago, The New Yorker magazine satirically described the invention of a reading machine. “It is obvious,” a fictional Professor Entwhistle was quoted as saying, “that the greatest waste of our civilization is the time spent in reading. We have been able to speed up practically everything. . . . But today a man takes just as long to read a book as Dante did. … So I have invented a machine. It operates by a simple arrangement of photoelectric cells. . .”

A simple arrangement of photoelectric cells that will read a book for you now has been unveiled by RCA researchers. The device looks at printed matter and reads it aloud, letter by letter. It sounds like a radio announcer spelling out “R-I-N-S-O.”

The main trouble with this invention is that it costs a mint of money.

The reading machine grew out of research on aids for blind people sponsored jointly by RCA, the Veterans Administration, and the wartime Office of Scientific Research and Development. This work also produced the “reading pencil” (PS, April ’47, p. Ill), which sounds a different tone signal for each letter and is now being tested with blind hospital patients.

The pencil can read only about 20 words a minute, however, much slower than running a finger over Braille and only about a third as fast as the new machine. Both devices are purely experimental, and there are no present plans for manufacturing them.

Besides reading all 26 lettersâ€”thus spelling out any wordâ€”the new machine can read a few whole words. One could be built to read additional words by making it bigger and more complex.

Even the existing one is an electronic-engineer’s nightmare. The “simple arrangement of photoelectric cells” overflows a tall radio-equipment rack housing more than 160 vacuum tubes. Part of its brain alone uses 960 resistors. Too expensive for home use, it might be installed in libraries and institutions. It could also be hooked up as a master reading station to serve several persons using different books.

The present model was developed and built under the direction of L. E. Flory and W. S. Pike at the RCA Laboratories.

Their reading machine has three main parts: an eye that looks at the printed letter, a brain that decides which of the 26 letters it is, and a voice that speaks the letter.

The eye is essentially a scanner moved across the text by hand. Inside is a special cathode-ray tubeâ€”the smallest RCA makesâ€” with eight flying spots of light that flash on and off 600 times every second. Light from these spots is interrupted when the scanner passes over a black letter. These interruptions are noted by a photoelectric cell, which passes the signal on to the machine’s brain.

The eight spots of light are strung out vertically, so that each spot picks up a different part of a letter. The top spots catch the upper parts of tall letters like “1”; the lower spots catch the ends of letters like “g”; and the middle spots are arranged to pick up details like the crossbar of an “e.” In this way, each letter causes different spots to be interrupted a different number of times, creating a characteristic signal for itself.

The brain is an electronic computer similar to the machines used for complex scientific calculations. It counts the number of times each spot has been interrupted, thus identifying which letter the electric eye has seen, and tells the voice which letter to speak.

The voice is 40 magnetic-tape phonographsâ€”one phonograph for every letter and word in the machine’s vocabulary. The brain switches on the phonograph corresponding to the letter seen by the eye. The phonograph speaks that letter and then turns itself off.