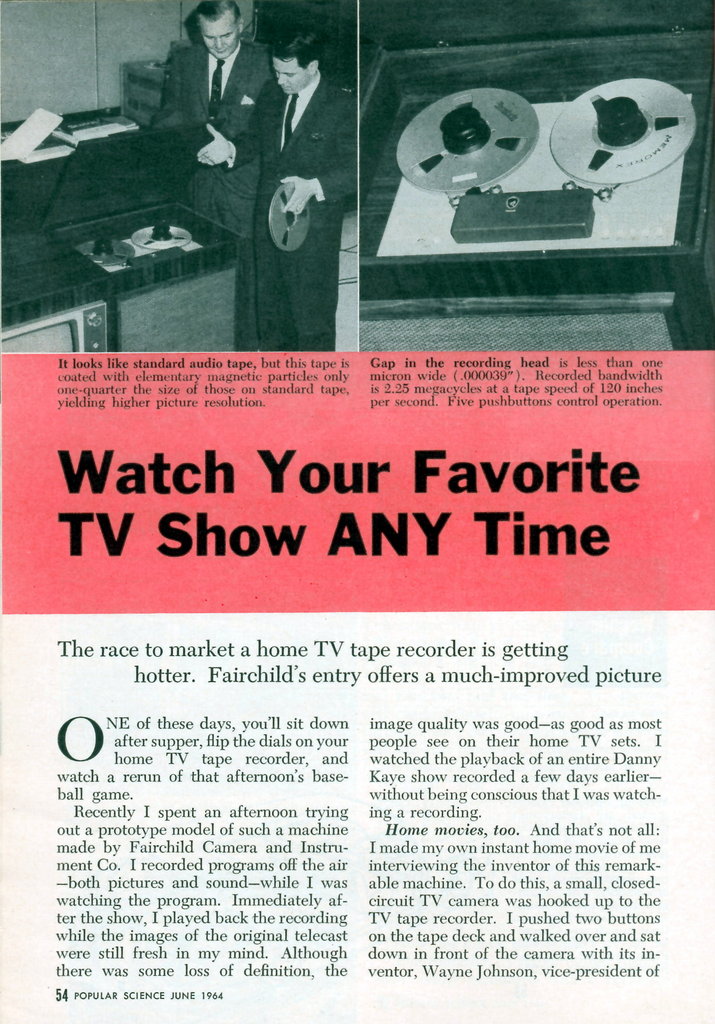 Home movies, too. And that’s not all: I made my own instant home movie of me interviewing the inventor of this remarkable machine. To do this, a small, closed-circuit TV camera was hooked up to the TV tape recorder. I pushed two buttons on the tape deck and walked over and sat down in front of the camera with its inventor, Wayne Johnson, vice-president of the Winston Research Division of Fair-child. A few minutes later I saw the interview on the TV setâ€”just as if it were originating in a TV studio.

The Fairchild TV tape recorder is the second such machine given an eyewitness report in Popular Science. Telcan, the British-made recorder, was reported by David Scott, our European editor, in October, 1963. Judging from Scott’s report and his photographs of the images produced by Telcan, Fairchild is much more advanced.

Both machines use stationary record and playback heads, both use 1/4″-wide tape, and both move the tape past die heads at a brisk 120 inches per second. Telcan uses separate heads to record the audio and video signals, requiring two side-by-side tracks on the tape. Fairchild multiplexes the video, audio, and synch signals all onto one track, and squeezes four of these composite-signal tracks into the width of the 1/4″ tape.

Recording time: one hour. The Fair-child machine is self-reversing, giving a total unattended recording time of one hour using 1/2-mil tape, or a half-hour with the 1-mil tape used for demonstrating the prototype. A photocell “sees” a “window” in the tape near each end to signal the machine to reverse.

Plans to market the machine, according to a Fairchild spokesman, depend on the reaction they get from several of the nation’s top TV-set manufacturers to whom they demonstrated the machine shortly after I saw it. One guesstimate of the price tag puts it around $500.â€”Hubert Luckett.