Modern Mechanix
Issue: May, 1931
Posted in: Entertainment, How to
No Comments on Easy Juggling Tricks (May, 1931) 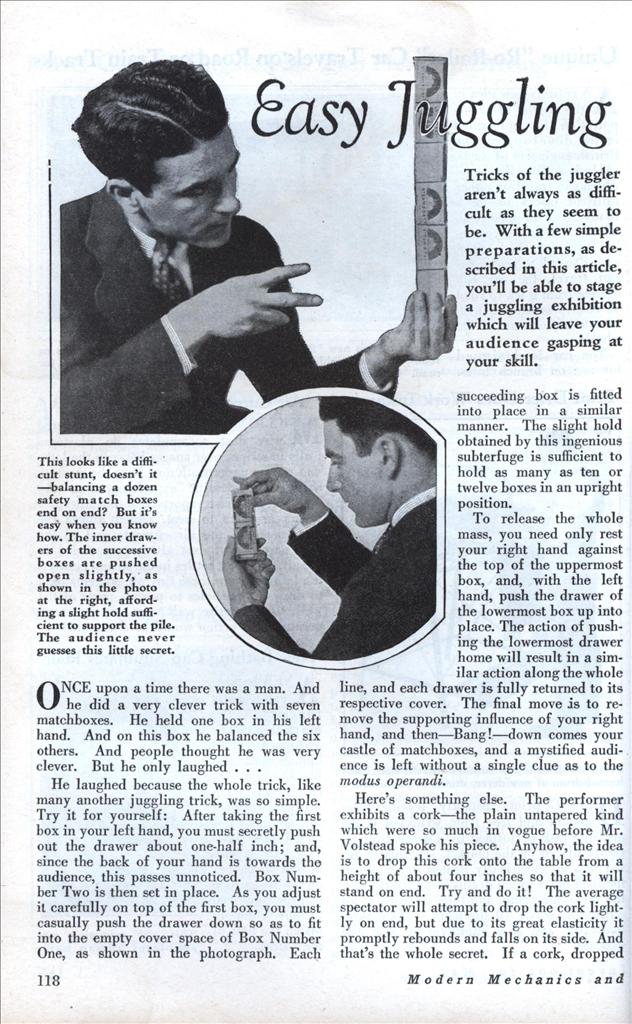 Tricks of the juggler aren’t always as difficult as they seem to be. With a few simple preparations, as described in this article, you’ll be able to stage a juggling exhibition which will leave your audience gasping at your skill.

ONCE upon a time there was a man. And he did a very clever trick with seven matchboxes. He held one box in his left hand. And on this box he balanced the six others. And people thought he was very clever. But he only laughed . . .

He laughed because the whole trick, like many another juggling trick, was so simple. Try it for yourself: After taking the first box in your left hand, you must secretly push out the drawer about one-half inch; and, since the back of your hand is towards the audience, this passes unnoticed. Box Number Two is then set in place. As you adjust it carefully on top of the first box, you must casually push the drawer down so as to fit into the empty cover space of Box Number One, as shown in the photograph. Each succeeding box is fitted into place in a similar manner. The slight hold obtained by this ingenious subterfuge is sufficient to hold as many as ten or twelve boxes in an upright position.

To release the whole mass, you need only rest your right hand against the top of the uppermost box, and, with the left hand, push the drawer of the lowermost box up into place. The action of pushing the lowermost drawer home will result in a similar action along the whole line, and each drawer is fully returned to its respective cover. The final move is to remove the supporting influence of your right hand, and then—-Bang!—down comes your castle of matchboxes, and a mystified audience is left without a single clue as to the modus operandi.

Here’s something else. The performer exhibits a cork—the plain untapered kind which were so much in vogue before Mr. Volstead spoke his piece. Anyhow, the idea is to drop this cork onto the table from a height of about four inches so that it will stand on end. Try and do it! The average spectator will attempt to drop the cork lightly on end, but due to its great elasticity it promptly rebounds and falls on its side. And that’s the whole secret. If a cork, dropped on end, rebounds and falls on its side; then the same cork, if dropped on its side, will rebound and fall on its . . . Right you are, old man, as the Englishman would put it, that’s just exactly how you do it.

Listen to this one: A coin is very delicately balanced upon the extreme edge of a tumbler, and beneath the quarter—or whatever the coin may be—a slip of paper is placed, as shown in the diagram. The problem is to remove the paper without touching or upsetting the coin or glass. The average person attempting to do the stunt will either try to jerk the paper away or else remove it very gently from beneath the coin. In either case, the result is the same—it simply can’t be done. If you will hold the free end of the paper in your left hand, however, and then strike the center of the paper sharply with the forefinger of your right hand, as shown in the photograph, you will find that the paper slips out quite readily. In fact, you will be somewhat surprised to notice bow motionless the coin remains.

This next item has to do with the balancing of a stick of gum on the knuckles of your left hand. Moreover, the stick of gum rues and falls at the performer’s command in a manner that is quaintly mysterious. The “nigger in the woodpile,” in this case, is a straight pin. This is clipped between the second and third fingers of the hand, and the gum is slipped over, as shown in the photograph. Get a pin and try it! By flexing the muscles of the hand, you will soon see how Mr. Gum so unhesitatingly obeys the performer’s commands about going to bed and getting up in the mornings.

In this next little conceit, the performer takes two matches. He lights them and holds one about two inches above the other. With a light puff of his breath, the performer extinguishes the lowermost match. It is clearly out. And yet … mirabile diclu … the flame from the uppermost match is seen to slyly slip down the rising smoke from the lowermost match and set it once more on fire. The whole secret is in the match. One of these, the lowermost one, has been previously dipped into paraffin. That’s all there is to it. If you’re a Doubting Thomas, get some paraffin and try it!

For a novel and useful bit of legitimate juggling, try tossing a cigarette from your right hand into your mouth, as shown in the photograph. It really can be done. If you have the patience, and have seen the Hon. Douglas Fairbanks perform the stunt, you may, with practice, achieve sublime success. In the end you’ll probably give up, thoroughly baffled. And it’s here that the clever work commences. If you will take a cigarette and slightly “gimmick” it by inserting a small metal weight in one end, as shown in the sketch, you will find the juggle comparatively simple—as certain as the archaic boyhood juggle of tossing peanuts into the air and catching them in your mouth. Moreover, you can defy Mr. Gravity with this prepared cigarette by balancing it on your hat, on your finger tip, or letting it lean far out over the edge of a table, as shown in the photograph.

Another legitimate bit of juggling—that is, it’s supposed to be “on the square” consists of dividing an apple. And how! The “and how” is what makes the trick so clever. The apple is neatly parted in the center by striking it a quick blow with the lone forefinger!

No, it’s not necessary to be a strong man. Merely take your thumb nail, and while nobody is paying particular attention, run the nail completely around the fruit so that the apple’s skin is broken all around. That’s all there is to it. By striking the apple with the side of the hand, or even with a single finger, it can be easily parted into two equal segments, as shown in the photograph.

You’ve seen the stunt of balancing an egg on end—either end. It’s popular enough to repeat the explanation of how it’s done. The egg is blown of its contents by drilling a tiny hole in either end and forcing the contents through one hole by blowing at the other with the lips. Then the egg is partially filled with fine sand, the holes sealed up, and the egg stands in any position in which it is placed if .you are careful to shift the sand to balance it.

The next time you pay your check at the restaurant, you can puzzle the cashier with this trick: You apparently lay down a fifty-cent piece on the counter — the cashier hears the audible click of the coin being deposited—yet when your fingers are removed, there’s no coin there. The explanation is simply a matter of clever juggling.

Displaying the coin in the fingers of your right hand, you transfer it, during the process of turning your hand over, to the left. The fingertips of both hands are then placed down on the counter, the left some distance away from the right, which holds the center of attention because it apparently is the one containing the coin. But it ain’t so; the coin which made the noise when it was slapped to the table is under the fingers of the left hand, where it is eventually disclosed after the puzzled victim has done a lot of unnecessary searching about in a vain effort to discover what has become of the missing money.

Here’s another one: Place a twenty-five cent piece upright on a flat table, and sup- port it with the tip of the index finger, which is held parallel with the table. Then, stroking the finger supporting the coin with the index finger of your other hand, you inform your breathless public that the friction induced by this stroking will cause the quarter to spin when your finger is removed. It does—but here’s how: Just before releasing the coin from under your finger, the thumb of the hand doing the stroking catches the quarter along one side and gives it a flip which imparts its spinning motion. Thus there’s a purely mechanical basis to the stunt, but the observer is rarely sharp enough to “catch on” to the method.

Like most stunts, these juggling tricks require a little practice, but they are by no means beyond the average person’s ability. They arouse the curiosity and make your audience ask you, “How do you do it?” They won’t be satisfied until you tell ’em. As to the trick of balancing a dozen balls in the air at one time—that’s something else again!