Mechanix Illustrated
Issue: May, 1950
Posted in: Entertainment
Tags: stunts
No Comments on Easy Money – The Hard Way (May, 1950) 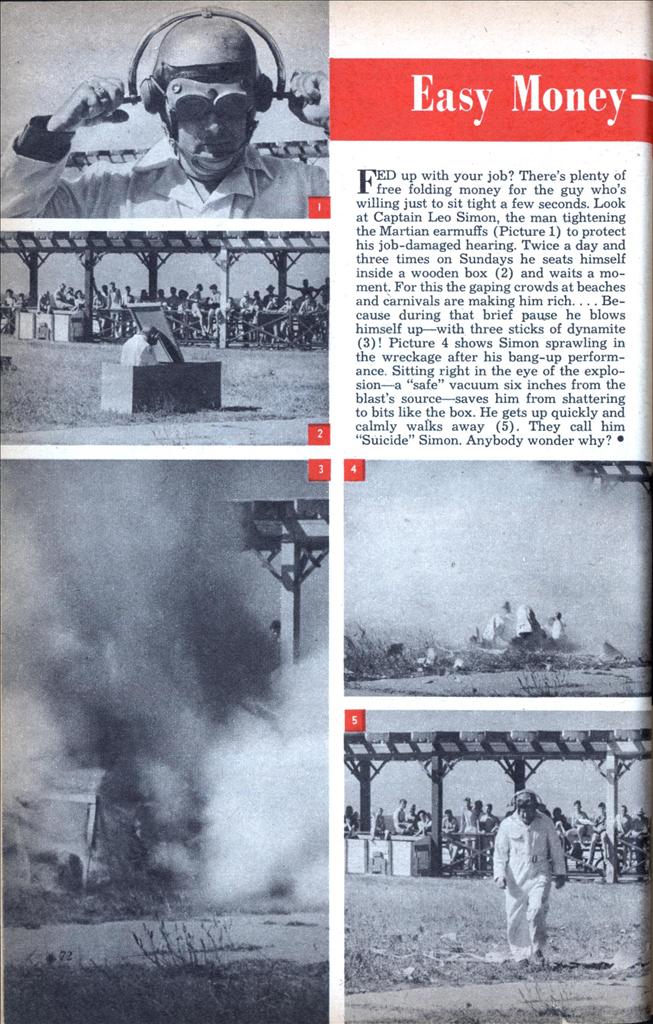 FED up with your job? There’s plenty of free folding money for the guy who’s willing just to sit tight a few seconds. Look at Captain Leo Simon, the man tightening the Martian earmuffs (Picture 1) to protect his job-damaged hearing. Twice a day and three times on Sundays he seats himself inside a wooden box (2) and waits a moment. For this the gaping crowds at beaches and carnivals are making him rich. . . . Because during that brief pause he blows himself up—with three sticks of dynamite (3)! Picture 4 shows Simon sprawling in the wreckage after his bang-up performance. Sitting right in the eye of the explosion—a “safe” vacuum six inches from the blast’s source—saves him from shattering to bits like the box. He gets up quickly and calmly walks away (5). They call him “Suicide” Simon. Anybody wonder why? •

“I’M never nervous,” says Holger Rasini. Every evening just before he dashes off to work in his 350-lb custom-built car, he gets tense, however. Not because he’s worrying about anything as trivial as a job, or money. He’s worrying about losing his life! That’s what this Danish daredevil risks each night at European shows when he rockets off the runway to do a four-wheeled loop-the-loop in midair. In Picture 1 the car is nosing down for the flipover on its back (2). Falling fast, he whips out of the loop just in time to crack down on the raised tarpaulin in a happy landing. It’s hard on the spectators but harder on Rasini’s neck. He’s never nervous now—he’s already scared all the nerves out of his body. •

IT’S tough on the teeth but Andre Le Gall has enough pull, to get along very well in life—even when pitted against four motorcycles with the combined strength of 22 horses. This strong jaw man also astounds the citizens of St. Servan, France, by jaw-towing four freight cars through the streets. Despite all that pull, though, he has still another jawing job-crying out the town news. •