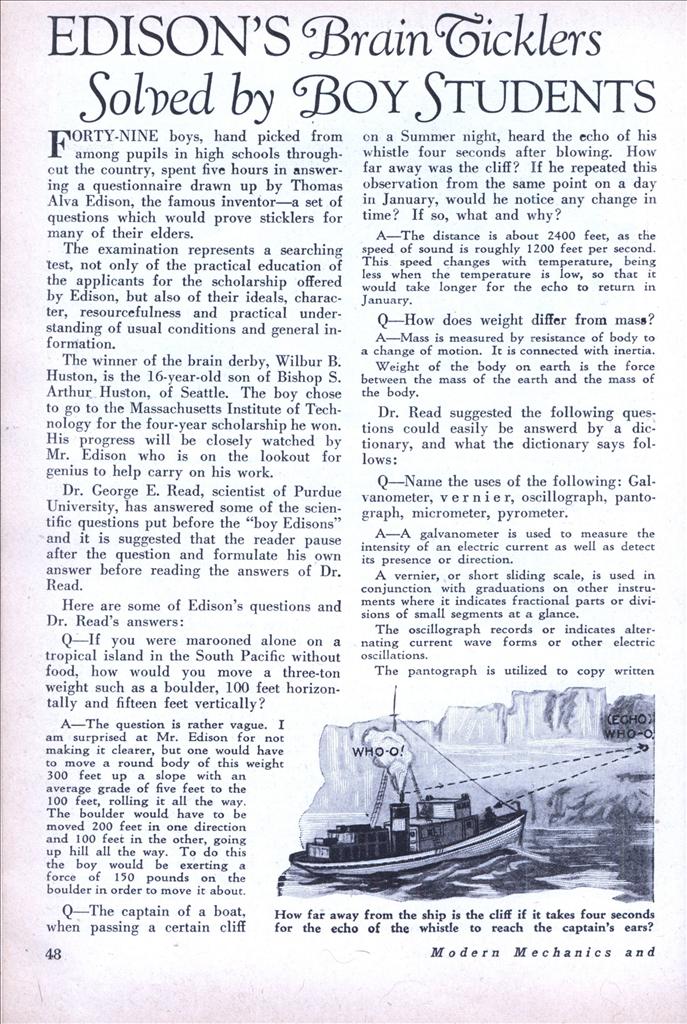 FORTY-NINE boys, hand picked from among pupils in high schools through-cut the country, spent five hours in answering a questionnaire drawn up by Thomas Alva Edison, the famous inventor—a set of questions which would prove sticklers for many of their elders.

The examination represents a searching test, not only of the practical education of the applicants for the scholarship offered by Edison, but also of their ideals, character, resourcefulness and practical understanding of usual conditions and general information.

The winner of the brain derby, Wilbur B. Huston, is the 16-year-old son of Bishop S. Arthur Huston, of Seattle. The boy chose to go to the Massachusetts Institute of Technology for the four-year scholarship he won. His progress will be closely watched by Mr. Edison who is on the lookout for genius to help carry on his work.

Dr. George E. Read, scientist of Purdue University, has answered some of the scientific questions put before the “boy Edisons” and it is suggested that the reader pause after the question and formulate his own answer before reading the answers of Dr. Read.

Here are some of Edison’s questions and Dr. Read’s answers: Q—If you were marooned alone on a tropical island in the South Pacific without food, how would you move a three-ton weight such as a boulder, 100 feet horizontally and fifteen feet vertically?

A—The question is rather vague. I am surprised at Mr. Edison for not making it clearer, but one would have to move a round body of this weight 300 feet up a slope with an average grade of five feet to the 100 feet, rolling it all the way. The boulder would have to be moved 200 feet in one direction and 100 feet in the other, going up hill all the way. To do this the boy would be exerting a force of 150 pounds on the boulder in order to move it about.

Q—The captain of a boat, when passing a certain cliff en a Summer night, heard the echo of his whistle four seconds after blowing. How far away was the cliff? If he repeated this observation from the same point on a day in January, would he notice any change in time? If so, what and why?

A—The distance is about 2400 feet, as the speed of sound is roughly 1200 feet per second. This speed changes with temperature, being less when the temperature is low, so that it would take longer for the echo to return in January.

Q—How does weight differ from mass?

A—Mass is measured by resistance of body to a change of motion. It is connected with inertia.

Dr. Read suggested the following questions could easily be answerd by a dictionary, and what the dictionary says follows: Q—Name the uses of the following: Galvanometer, vernier, oscillograph, pantograph, micrometer, pyrometer.

A—A galvanometer is used to measure the intensity of an electric current as well as detect its presence or direction.

A vernier, or short sliding scale, is used in conjunction with graduations on other instruments where it indicates fractional parts or divisions of small segments at a glance.

The oscillograph records or indicates alternating current wave forms or other electric oscillations.

The pantograph is utilized to copy written material or maps on a larger or smaller scale by tracing over the original.

A micrometer or caliper gauge will make fine measurements down to .0001 of an inch.

A pyrometer measures the expansion of solid bodies by heat.

It is interesting to note that prize-winner Huston answered most of the technical questions as correctly as Professor Read and ether scientists. Some of young Huston’s answers follow: Q—-What do you consider four of the most important qualifications necessary to success in any pursuit?

A—Ambition, the will to work, education and stamina.

Q—What are your four favorite publications?

Q—When do you consider a lie permissible?

A—In case of serious trouble, pain and grief, and you do not benefit yourself in any way.

Q—What future do you see for the automobile?

A—The automobile will become a subordinate means of transportation, to be used for short distances, while the airplane will be used for long distances. (He also foresaw the electrification of both.) Q—What would you do if marooned on an island in the South Pacific without tools and had to move a heavy boulder for some distance?

A—I would use a young tree, cut with a sharp stone, as a lever, on an inclined plane—provided the boulder could be moved and I could start it.

Q—Which one of the following would you be willing to sacrifice for the sake of being successful: Happiness, comfort, reputation, pride, honor, health, money, love?

Q—If you had been given a certain experiment to perform and had been informed that it could be done successfully, but you had failed 10 times, what would you do?

A—I would check my instruments and my chemicals and try it again. If then I got no results I would try again with varying procedure.