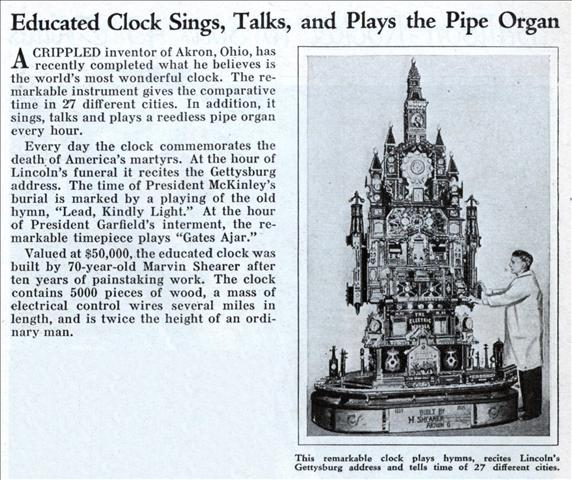 A CRIPPLED inventor of Akron, Ohio, has recently completed what he believes is the world’s most wonderful clock. The remarkable instrument gives the comparative time in 27 different cities. In addition, it sings, talks and plays a reedless pipe organ every hour.

Every day the clock commemorates the death of America’s martyrs. At the hour of Lincoln’s funeral it recites the Gettysburg address. The time of President McKinley’s burial is marked by a playing of the old hymn, “Lead, Kindly Light.” At the hour of President Garfield’s interment, the remarkable timepiece plays “Gates Ajar.”

Valued at $50,000, the educated clock was built by 70-year-old Marvin Shearer after ten years of painstaking work. The clock contains 5000 pieces of wood, a mass of electrical control wires several miles in length, and is twice the height of an ordinary man.