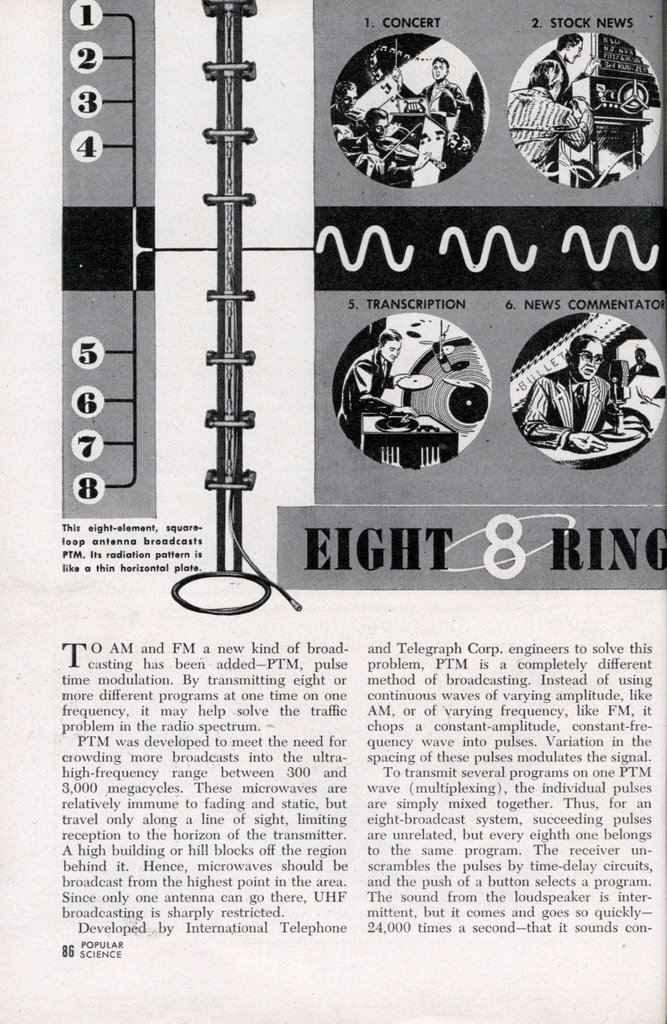 TO AM and FM a new kind of broadcasting has been added—PTM, pulse time modulation. By transmitting eight or more different programs at one time on one frequency, it may help solve the traffic problem in the radio spectrum.

PTM was developed to meet the need for crowding more broadcasts into the ultra-high-frequency range between 300 and 3,000 megacycles. These microwaves are relatively immune to fading and static, but travel only along a line of sight, limiting reception to the horizon of the transmitter. A high building or hill blocks off the region behind it. Hence, microwaves should be broadcast from the highest point in the area. Since only one antenna can go there, UHF broadcasting is sharply restricted.

Developed by International Telephone and Telegraph Corp. engineers to solve this problem, PTM is a completely different method of broadcasting. Instead of using continuous waves of varying amplitude, like AM, or of varying frequency, like FM, it chops a constant-amplitude, constant-frequency wave into pulses. Variation in the spacing of these pulses modulates the signal.

To transmit several programs on one PTM wave (multiplexing), the individual pulses are simply mixed together. Thus, for an eight-broadcast system, succeeding pulses are unrelated, but every eighth one belongs to the same program. The receiver unscrambles the pulses by time-delay circuits, and the push of a button selects a program. The sound from the loudspeaker is intermittent, but it comes and goes so quickly— 24,000 times a second—that it sounds continuous, just as interrupted images on a movie screen look continuous.

An experimental PTM station in New York City broadcasts on 930 megacycles, using a stacked, square-loop antenna. This radiates horizontal, pancakelike beams that lose little power to the sky. As many as 16 high-fidelity broadcasts are possible, and several hundred radiotelegraph messages can be handled at once.

Since PTM uses its own unique modulation system, listeners need special receivers. PTM sets have two main advantages: fixed frequency, needing no complicated tuning devices, and a directional, high-gain antenna permanently aimed at the single sending station. Tonal quality and cost of the sets are about the same as those of a high-quality AM or FM receiver.

Eventually, if crowding of the air waves continues to increase, eight entertainment programs may be broadcast by one PTM station. For the present, however, the difficulty of replacing millions of home radios makes such a use of PTM unlikely. Many other applications are likely to come sooner. The Signal Corps, for which PTM was originally developed, uses it in field communications (PSM, January, ’46, p. 188). Cities could make all municipal broadcasts from one PTM station. Firms that telephone recorded music to restaurants could use a single PTM station to offer eight choices. Business and market news might go out over PTM, and press associations could use it for teletype and radiophoto services. All these varied types of transmission have been successfully demonstrated.