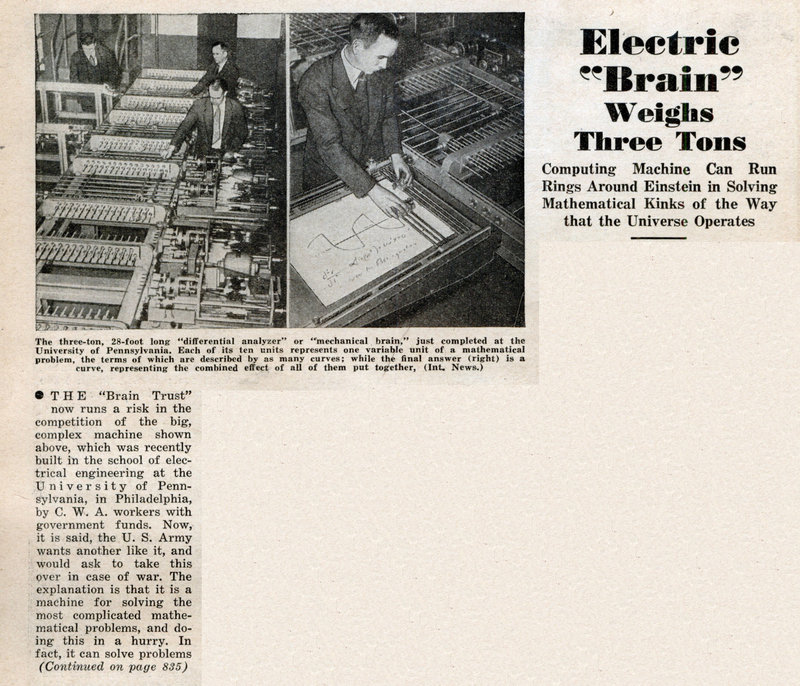 THE “Brain Trust” now runs a risk in the competition of the big, complex machine shown above, which was recently built in the school of electrical engineering at the University of Pennsylvania, in Philadelphia, by C. W. A. workers with government funds. Now, it is said, the U. S. Army wants another like it, and would ask to take this over in case of war. The explanation is that it is a machine for solving the most complicated mathematical problems, and doing this in a hurry. In fact, it can solve problems too complicated for any living mathematician to work outâ€”with an answer not always guaranteed mathemically exact, but at least good enough for practical purposes.

The purpose is to show what will happen when several continually changing factors enter into the case; in other words, to perform operations in the calculus, when they become exceedingly intricate. The “fire, control” machines, now used to plot the flight of shells from modern guns in moving ships, against moving targets, deal with practical conditions like this; and the machine pictured could answer a question of this nature, as well as a good many others less specialized. For instance, three or more heavenly bodies (like Earth, Sun, and Moon) are moving in their orbits at different rates of speed and varying distances, attracting each other. What will be the combined result of their forces, in changing the positions of each, in a given period? It is an enormously difficult proposition for the best mathematician in the world. With this machine, its ten “integrators” would be adjusted (by setting dials) to represent the varying factors of the problem, and then started turning. The friction discs and gears of the machine would operate on each other, each of them with an effect proportioned to the energy and speed it represented; and, on the final chart at the “answer table” of the machine (see illustration) a curve would be drawn by a metal pen, representing the formula desired (not necessarily a physical picture of the motion of one of the heavenly bodies, but a mathematical picture of it). The machine operates on the principle of one designed by Dr. Bush, of the Massachusetts Institute of Technology, three years ago (as illustrated in this magazine at the time) but is much larger.