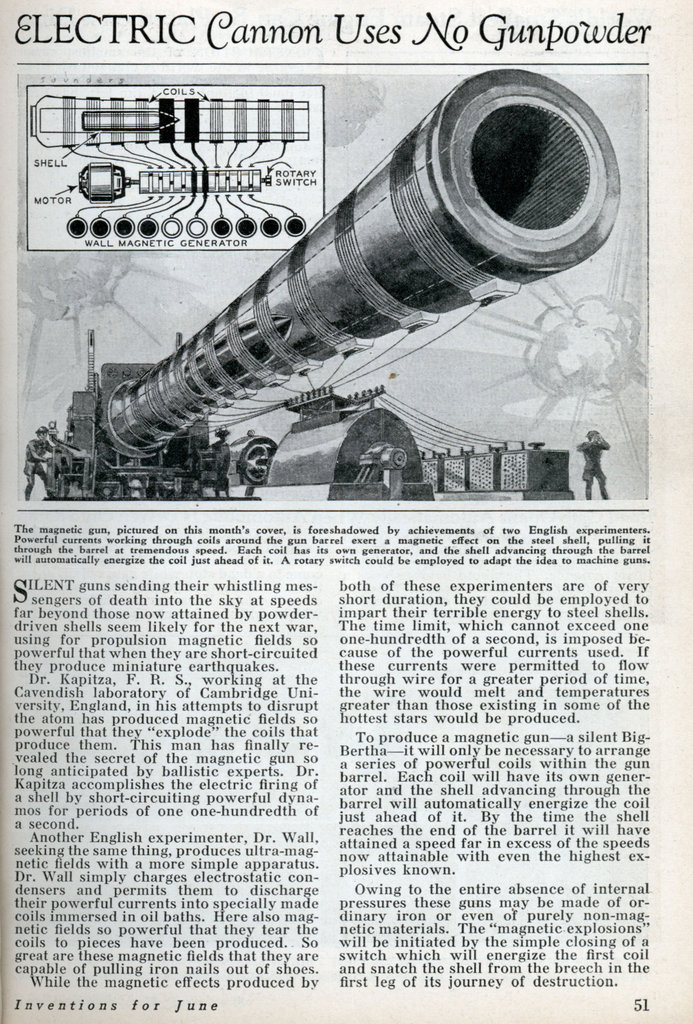 SILENT guns sending their whistling messengers of death into the sky at speeds far beyond those now attained by powder-driven shells seem likely for the next war, using for propulsion magnetic fields so powerful that when they are short-circuited they produce miniature earthquakes.

Dr. Kapitza, F. R. S., working at the Cavendish laboratory of Cambridge University, England, in his attempts to disrupt the atom has produced magnetic fields so powerful that they “explode” the coils that produce them. This man has finally revealed the secret of the magnetic gun so long anticipated by ballistic experts. Dr. Kapitza accomplishes the electric firing of a shell by short-circuiting powerful dynamos for periods of one one-hundredth of a second.

Another English experimenter, Dr. Wall, seeking the same thing, produces ultra-magnetic fields with a more simple apparatus. Dr. Wall simply charges electrostatic condensers and permits them to discharge their powerful currents into specially made coils immersed in oil baths. Here also magnetic fields so powerful that they tear the coils to pieces have been produced. So great are these magnetic fields that they are capable of pulling iron nails out of shoes.

While the magnetic effects produced by both of these experimenters are of very short duration, they could be employed to impart their terrible energy to steel shells. The time limit, which cannot exceed one one-hundredth of a second, is imposed because of the powerful currents used. If these currents were permitted to flow through wire for a greater period of time, the wire would melt and temperatures greater than those existing in some of the hottest stars would be produced.

To produce a magnetic gunâ€”a silent Big-Berthaâ€”it will only be necessary to arrange a series of powerful coils within the gun barrel. Each coil will have its own generator and the shell advancing through the barrel will automatically energize the coil just ahead of it. By the time the shell reaches the end of the barrel it will have attained a speed far in excess of the speeds now attainable with even the highest explosives known.

Owing to the entire absence of internal pressures these guns may be made of ordinary iron or even of purely non-magnetic materials. The “magnetic explosions” will be initiated by the simple closing of a switch which will energize the first: coil and snatch the shell from the breech in the first leg of its journey of destruction.