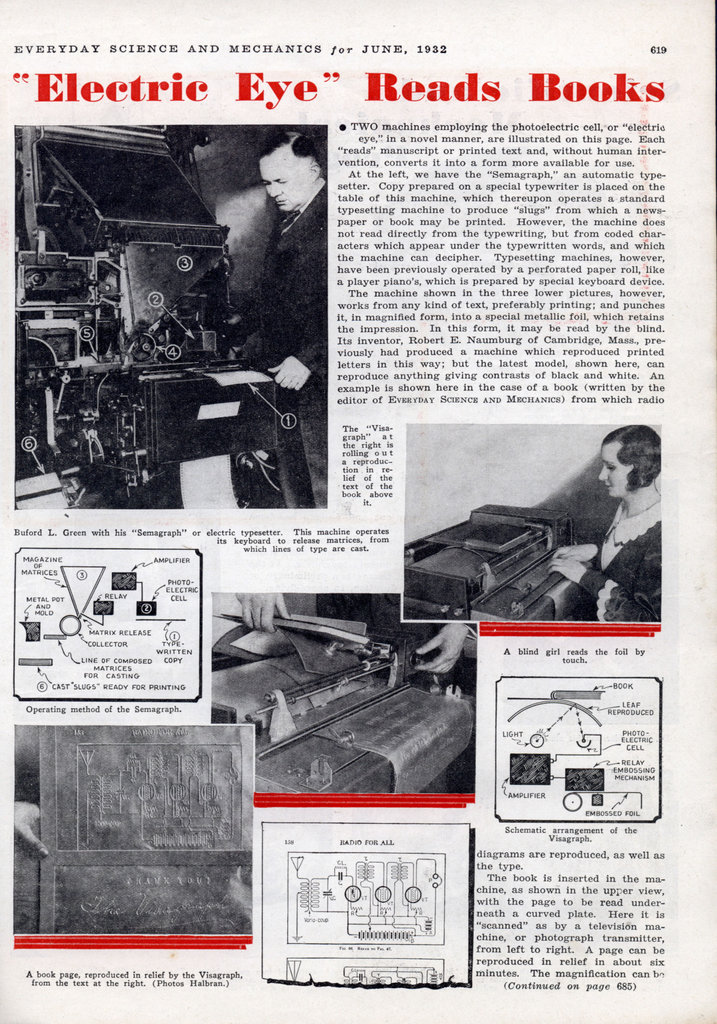 TWO machines employing the photoelectric cell, or “electric eye,” in a novel manner, are illustrated on this page. Each “reads” manuscript or printed text and, without human intervention, converts it into a form more available for use.

At the left, we have the “Semagraph,” an automatic typesetter. Copy prepared on a special typewriter is placed on the table of this machine, which thereupon operates a standard typesetting machine to produce “slugs” from which a newspaper or book may be printed. However, the machine does not read directly from the typewriting, but from coded characters which appear under the typewritten words, and which the machine can decipher. Typesetting machines, however, have been previously operated by a perforated paper roll, like a player piano’s, which is prepared by special keyboard device.

The machine shown in the three lower pictures, however, works from any kind of text, preferably printing; and punches it, in magnified form, into a special metallic foil, which retains the impression. In this form, it may be read by the blind. Its inventor, Robert E. Naumburg of Cambridge, Mass., previously had produced a machine which reproduced printed letters in this way; but the latest model, shown here, can reproduce anything giving contrasts of black and white. An example is shown here in the case of a book (written by the editor of Everyday Science and Mechanics) from which radio diagrams are reproduced, as well as the type.

The book is inserted in the machine, as shown in the upper view, with the page to be read underneath a curved plate. Here it is “scanned” as by a television machine, or photograph transmitter, from left to right. A page can be reproduced in relief in about six minutes. The magnification can be controlled by the operator; in the example shown, the foil is really about three times as large as the book page it reproduces.

It need hardly be said that the opportunity for self-instruction of the blind is enormously increased by a machine of this kind, which opens to them the entire field of books, instead of the few works laboriously copied by hand for their use.