The headline makes it sound like this article is about computers, but actually it’s about the birth of the electronics industry at a time when you couldn’t even get a degree in electrical engineering. 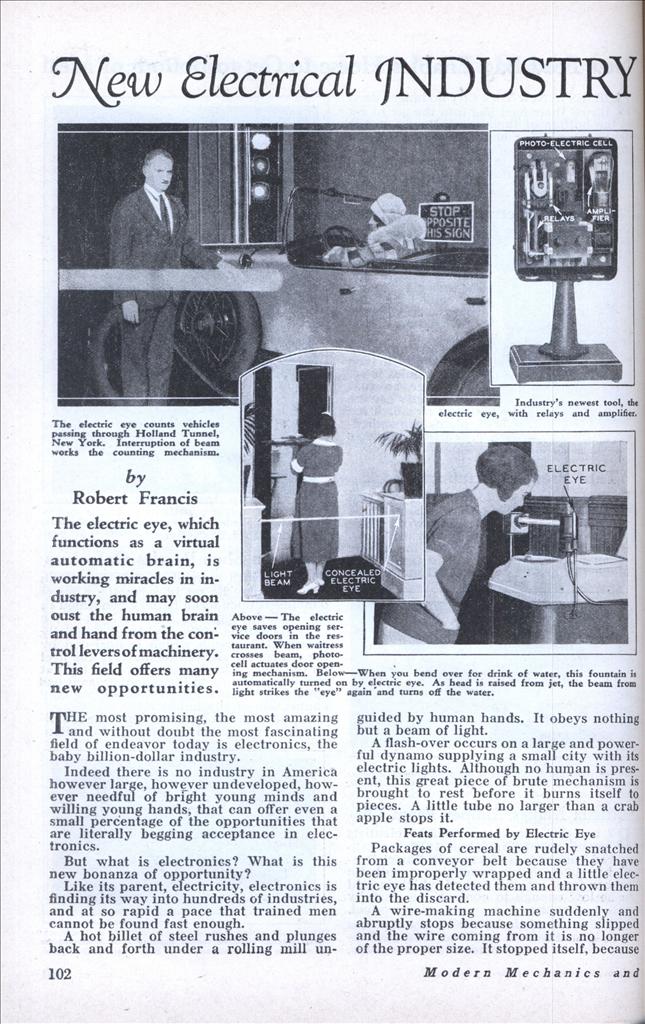 The electric eye, which functions as a virtual automatic brain, is working miracles in industry, and may soon oust the human brain and hand from the control levers of machinery. This field offers many new opportunities.

THE most promising, the most amazing and without doubt the most fascinating field of endeavor today is electronics, the baby billion-dollar industry.

Indeed there is no industry in America however large, however undeveloped, however needful of bright young minds and willing young hands, that can offer even a small percentage of the opportunities that are literally begging acceptance in electronics.

But what is electronics? What is this new bonanza of opportunity?

Like its parent, electricity, electronics is finding its way into hundreds of industries, and at so rapid a pace that trained men cannot be found fast enough.

A hot billet of steel rushes and plunges back and forth under a rolling mill unguided by human hands. It obeys nothing but a beam of light.

A flash-over occurs on a large and powerful dynamo supplying a small city with its electric lights. Although no human is present, this great piece of brute mechanism is brought to rest before it burns itself to pieces. A little tube no larger than a crab apple stops it.

Packages of cereal are rudely snatched from a conveyor belt because they have been improperly wrapped and a little electric eye has detected them and thrown them into the discard.

A wire-making machine suddenly and abruptly stops because something slipped and the wire coming from it is no longer of the proper size. It stopped itself, because its electronic brain brought it to a stop.

The brakes of a locomotive are automatically applied at the entrance to a block, an elevator stops at exact floor level, the conveying machinery of a steel mill stops when the bin is filled, and the tonsils of patients are removed without the shedding of blood.

We could go on and mention hundreds of other applications of electronics but space will not permit even a small percentage of the conquests of this new art to be outlined.

It amounts to the most astounding engineering achievement of the century; the new and golden age of automatic control where the human eyesight, the human hands and even the human brain is replaced by the controlled flow of electrons; the same electrons that light our lights, toast our bread and send our radio messages.

Within the next few years billions of dollars worth of electronic equipment will be sold and thousands of young men trained in the new and fascinating art will be needed to install it and to care for it. No industry will be able to escape the changes it will bring about and no young man can afford to overlook the opportunity that calls with such positive conviction.

Even today the electronic engineer is the man of the hour. Yesterday he saved a steel mill a hundred thousand dollars a year, tomorrow he may revolutionize another industry by the ingenious application of his little tubes that work so much magic, that lift such heavy loads from the backs of men. It is rather difficult to fully appreciate the possibilities of this new art. One of its most important tools is the photo-electric cell, commonly called the electric eye.

At the present time there are over one hundred applications of this amazing device. We find it in a dozen industries doing chores that save money and speed up operations that were formerly controlled by the human eyesight.

Industry Needs Trained Young Men What the future holds for it can only be awkwardly guessed at, so alluring are its prospects. Hundreds of new applications are being held for bright young men to find â€”young men trained to see such things.

It is very difficult to describe the field of electronics in so many words because its ramifications are so great; indeed so utterly confusing to one who knows little about the subject.

The best the writer can hope to do within the confines of this comparatively short article is to describe some of the tools of the electronic engineer. It is the marvelous devices that he has to work with that lead us to fully appreciate the prospects in store for those who succeed in mastering the new art.

As previously stated, in the photo-electric cell we have a device that replaces the human eye.

In the grid-glow tube, another electronic instrument, we have a device that in a way functions as a substitute for human feeling; it is sensitive to touch, even a wave of the hand being sufficient to control it.

Then we have the ordinary vacuum tube and here the writer predicts that some day vacuum tubes will be used more in industry than they are in home radios.

Then we must not forget the thyratrons, the pliotrons and the many other electronic tubes and the wonderful things that they do. The thyratron is a most versatile device capable of performing real miracles. It is able to control large sources of electrical energy without moving parts like switches, or relays.

Perhaps the reader will be able to better appreciate the great field of electronics if the writer outlines some of the industries and arts that are now using electronic devices.

When we come to a list of the arts that have been affected and benefited by electronics we begin to realize what a vast and profound human discovery has been made. Here we have: sound pictures, counting, grading, carrier systems, beam transmission, measurements, music, therapeutics, traffic control, machine control, metering, analysis (chemical and metallurgy), crime detection, geophysics, aviation, etc.

This may all sound very fine and very alluring to the ambitious young man who would throw his lot to it, but he will naturally ask: “What must I do to train myself for this work and how much will my services be worth to people who can make use of them?”

How to Acquire Training If the writer were to advise any young man in this matter of training, he would unhesitatingly recommend a general training in radio and he would specialize not in radio transmission or reception, but in the function of radio tubes and in the radio circuits that apply to amplification.

Here lies the great foundation work of electronics. In training of this sort, a young man will be able to equip himself with the great fundamentals of the electronic art.

Some day, of course, our colleges will recognize this young giant, but until they do, it is possible to receive very good training at radio schools.

And the salary? While much depends upon the individual, the writer would say that minimum salaries should run around $2,500 a year. They may reach as high as $10,000 for exceptional men who are able to save their employers a great deal of money by the application of electronic tubes and devices.

Electronic service men, naturally, cannot expect so much money for, after all, they are merely called upon to take care of something for which somebody else has been responsible. With this considered, the author does not see why a service man cannot demand a salary of $1,800 to $2,000 a year.

Looking forward to the time when large industries will have hundreds of electronic instruments in use, we can see where it will be necessary to have at least ten or fifteen electronic service men about a large factory.

We must not forget the genius in outlining the opportunities in this new art. He has the biggest chance of all. He will be the man who will help find many of the marvelous new applications that will be made in the coming years.

Today, as he looks into the future, he is limited only by his imagination. A new and wondrous world of magic is spread out before him and a hundred different industries are waiting to pay out huge sums to men who can show them how to apply electronic devices in ways that will save money and speed up operations.

Let them talk about radio, about television and the talkies, but the young man who can sense even dimly the storehouse of opportunity in this new field is the man of tomorrow.