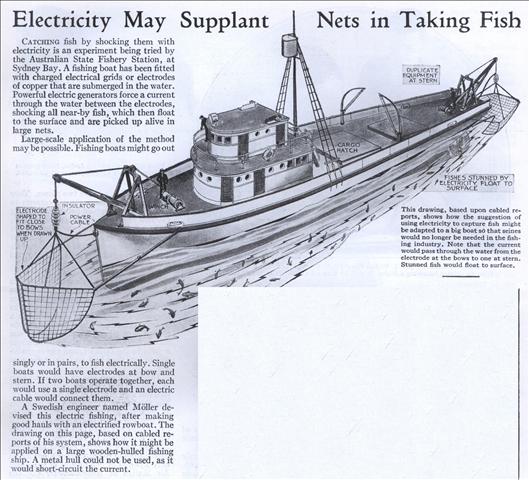 Catching fish by shocking them with electricity is an experiment being tried by the Australian State Fishery Station, at Sydney Bay. A fishing boat has been fitted with charged electrical grids or electrodes of copper that are submerged in the water. Powerful electric generators force a current through the water between the electrodes, shocking all near-by fish, which then float to the surface and are picked up alive in large nets.

Large-scale application of the method may be possible. Fishing boats might go out singly or in pairs, to fish electrically. Single boats would have electrodes at bow and stern. If two boats operate together, each would use a single electrode and an electric cable would connect them.

A Swedish engineer named Moiler devised this electric fishing, after making good hauls with an electrified rowboat. The drawing on this page, based on cabled reports of his system, shows how it might be applied on a large wooden-hulled fishing ship. A metal hull could not be used, as it would short-circuit the current.