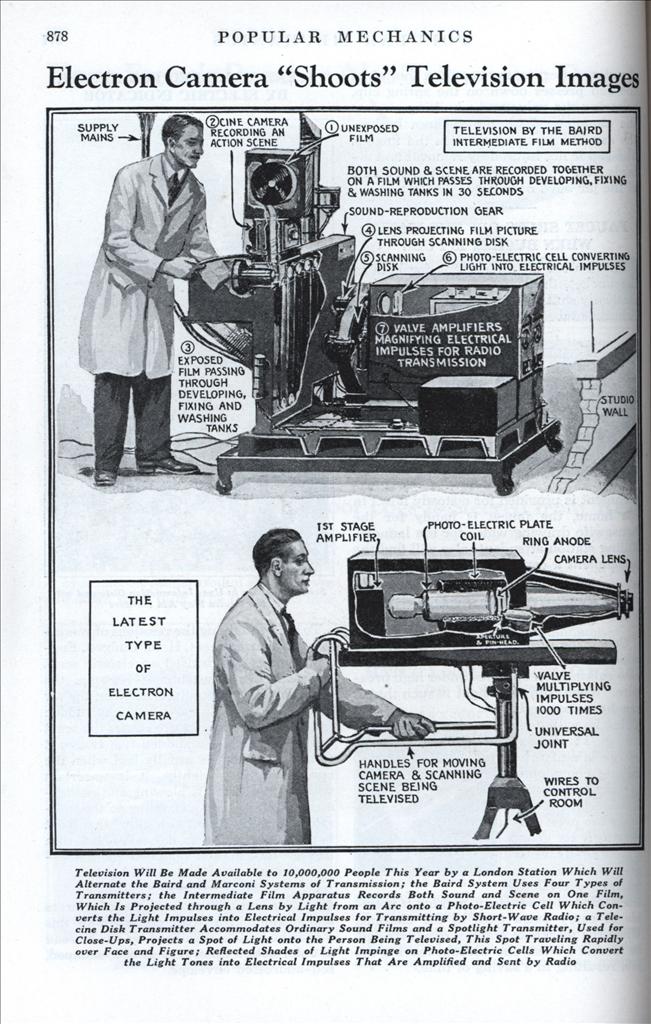 Television Will Be Made Available to 10,000,000 People This Year by a London Station Which Will Alternate the Baird and Marconi Systems of Transmission; the Baird System Uses Four Types of Transmitters; the Intermediate Film Apparatus Records Both Sound and Scene on One Film, Which Is Projected through a Lens by Light from an Arc onto a Photo-Electric Cell Which Converts the Light Impulses into Electrical Impulses for Transmitting by Short-Wave Radio; a Tele-cine Disk Transmitter Accommodates Ordinary Sound Films and a Spotlight Transmitter, Used for Close-Ups, Projects a Spot of Light onto the Person Being Televised, This Spot Traveling Rapidly over Face and Figure; Reflected Shades of Light Impinge on Photo-Electric Cells Which Convert the Light Tones into Electrical Impulses That Are Amplified and Sent by Radio.

The Electron Camera Is the Greatest Advance in This System of Transmission; It Has No Moving Parts; the Scene Is Recorded through a Camera Lens and Impinges on a Photo-Electric Plate for Conversion into Electrons; the Electrons Are Vibrated, Pass a Small Aperture, Strike a Metal Pin-head, and Set Up Minute Electrical Impulses Varying with the Light Tones Received; These Are Broadcast by Ultra-Short Waves and Reconverted into the Scene Televised; the Cathode-Ray Tube Is Used in the Latest Type of Home Receiver; It Receives the Signals at Its Narrow End and Fires Them in a Stream of Electrons onto a Disk-Electrode; an Anode Directs the Stream onto a Fluorescent Screen at the Wide End of the Tube and as the Electrons Strike the Screen, They Become Points of Light and, with Great Rapidity, Reconstruct the Picture