Popular Electronics
Issue: Jun, 1958
Posted in: Computers
14 Comments on ELECTRONIC COMPUTERS – what they are and what they do (Jun, 1958)

ELECTRONIC COMPUTERS – what they are and what they do (Jun, 1958)

Let’s see, I’m publishing an article about computers, what should I use for a picture? I know! People writing on a plotter with pencils. Nothing says welcome to the computer age better than pencils! 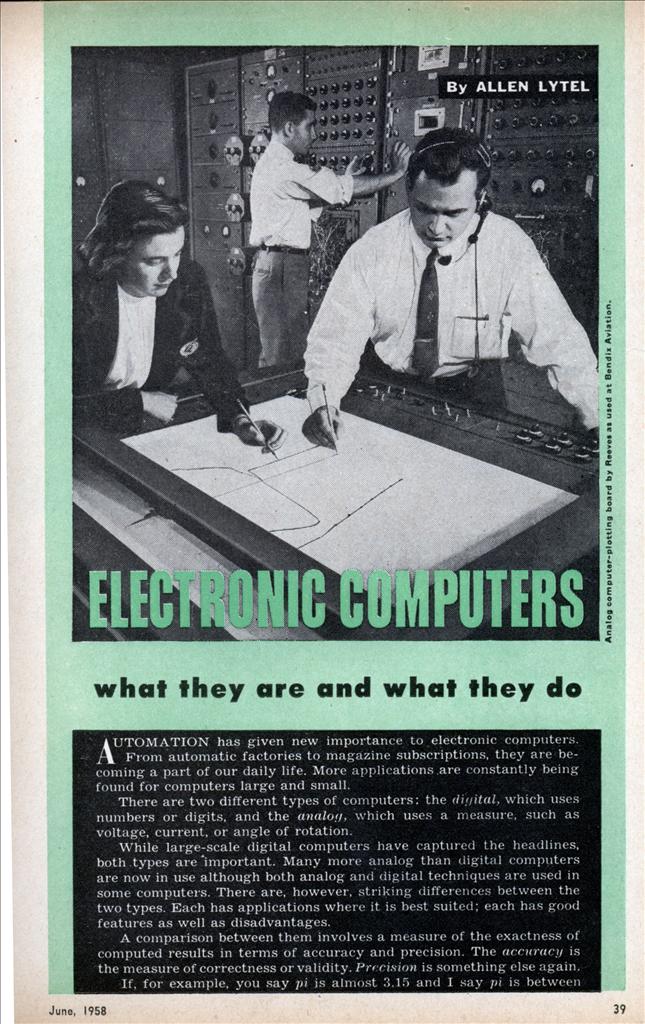 ELECTRONIC COMPUTERS – what they are and what they do

AUTOMATION has given new importance to electronic computers. From automatic factories to magazine subscriptions, they are becoming a part of our daily life. More applications are constantly being found for computers large and small.

There are two different types of computers: the digital, which uses numbers or digits, and the analog, which uses a measure, such as voltage, current, or angle of rotation.

While large-scale digital computers have captured the headlines, both types are important. Many more analog than digital computers are now in use although both analog and digital techniques are used in some computers. There are, however, striking differences between the two types. Each has applications where it is best suited; each has good features as well as disadvantages.

A comparison between them involves a measure of the exactness of computed results in terms of accuracy and precision. The accuracy is the measure of correctness or validity. Precision is something else again.

ANALOG COMPUTERS There are many forms of analog computers. A bathroom scale is one. When you step on it, the pointer moves across the dial. If your weight increases, the pointer moves farther; if you lose weight, it doesn’t move as far. The amount of rotation (angle) depends upon your weight or there is an analogy between the two.

In an analog system, quantities are measured (not counted) and fed as inputs to the computer. The computer acts on the inputs in such a way as to perform a number of mathematical operations or to solve an equation. Results are usually plotted on a graph as output data.

Simpler and More Direct. Analog computers are, in a fundamental sense, more direct and simple than digital computers. An analog computer is not, ordinarily, a high-precision device. As an example, a circuit such as that in Fig. 1(A) will illustrate a simple operation.

The sum of the voltage drops in a series circuit is equal to the source voltage for a resistive circuit. Each input voltage is in series with the output.

With three input voltages (e1, e2, e3) the output (e) will be the analog of the sum of the inputs.* This is an analog adder, and you can modify this circuit so that it will subtract by changing the polarity of any input voltage.

Amplifiers are used in many electronic analog computers, as shown in (B) of Fig. 1. Here the output voltage is the actual sum of the input voltages. These are high-gain stages suitable for many operations.

An example of a commercial amplifier is shown in Fig. 2. By the use of simple networks, a single stage (actually two tubes) can perform operations such as addition. Subtraction (negative addition), multiplication (the input multiplied by the gain of the amplifier), and division (multiplication with less than unity gain) can all be accomplished quite directly.

Other mathematical operations also can be done in a single stage, and this is the inherent value to the analog approach. Among the basic analog operations are integration and differentiation. Integral calculus deals, among other things, with the determination of a variable quantity when the law of its change is known.

The inverse of integration is, of course, differentiation, or the determination of the rate of change of a quantity with respect to another quantity, usually time. A simple circuit, Fig. 4, will act to differentiate, but again an amplifier is often used. This amplifier has resistive feedback.

Parts of Analog Computer. A block diagram of an analog computer is shown in Fig. 5. A series of amplifiers and passive elements, such as resistors, inductors or capacitors, form an electrical system which represents (is an analog of) the problem to be solved. The computer has control (central signal component) for determining the operation and for introducing the input data, a power supply, a display or output (central response component and scope) which presents the final data, and the operation unit (component computing assemblage), the part which does the actual computing. Memory is distributed throughout the system.

An analog computer is at its best when a precision of three or four digits is sufficient, no program branches are required, and when there is one independent variable. Data which is available in analog form, such as varying voltage, can be directly fed to an analog computer.

The disadvantages of an analog computer are its lack of precision and its limited flexibility. Usually the computer has to be reconnected, by means of patch-cords, to run a different problem.

DIGITAL COMPUTERS A digital computer counts rather than measures. Most large computers are digital in nature; they are versatile and, in structure, the electronic type has many small building blocks.

A cash register is a digital computer and so is an abacus. Because numbers are used, any required degree of precision may be obtained by carrying more digits. Since digits are used, the computer components (transistors, vacuum tubes) respond to on and off states like a switch which is either open or closed.

In many respects a digital computer is a kind of automatic calculating device which follows directions. Many digital computers can be represented by the block diagram in Fig. 6, and there are variations of this fundamental computer.

The basic units are: the arithmetic and logic section, which performs the actual arithmetic operations; the memory or storage which retains the program, the problem, and the results; the control unit which directs the computer operation; the input device for translating all input information to a form usable by the computer; and the output device which translates the computer output into a form which is most usable.

The memory has a large number of locations or addresses, all of which can store information and retain it until needed.

In this type of computer, all of the information needed for a solution to a problem may be stored in the memory, including all of the steps or program required for the solution. Once the proper information is placed in the memory, the computer is independent of all outside devices until a solution is reached. Then the final results are stored until they are needed through the output device.

A magnetic-core memory is an example of an internal memory system in actual use. This is a large group of tiny ring transformers which are magnetized in one direction (clockwise) or the other (counterclockwise). Other memories include the early use of relays (open and closed for 1 or 0), magnetic drums (circular tracks of magnetic materials with pulses or no pulses for a 1 or a 0), the Williams tube (a cathode-ray tube with dots stored on the face for data), the capacitor store (where the charge on a capacitor changes with the digital data), a transistor or vacuum-tube memory (where the tube or transistor is either on or off for a 1 or a 0), and the delay line (which takes pulses and delays them until they are needed).

In the control section, the implementation of the program is directed. The control unit observes the instructions and plans their proper execution by following the principles of operation for a given machine. This selection may translate a multiply order into a series of additions, which it actually is to the computer.

Both the input and output devices are similar but they perform opposite functions. An input unit reads information from punched cards, magnetic tapes or special keyboards, and codes this data so that the computer can handle and use the information. The opposite function is performed by the output unit, which converts the results of computer operation to usable form such as typed sheets or punched cards for the control of production machines.

Binary Notation. Binary numbers which represent instructions or quantities for computation are usually presented in the binary or two-value system rather than the decimal system.* Any on-off device can be used with the binary system. Numbers can represent letters and combinations of letters can, of course, make words, and complete sentences can be remembered.

Digital computer “language” is usually a form of binary notation. In Fig. 7 are several stages of a transistorized computer. Each stage (A through E) is a transistor switching circuit which is either on (conducting) or off (non-conducting). A neon lamp is attached to each stage as a visual indicator. If decimal 20 is represented, stages C and E only are on, indicating l’s. All other stages are off, indicating 0’s. In the same way, decimal 10 means that only stages B and D are on. If decimal 5 is represented, A and C are on, all others off.

Modular construction of computers is becoming increasingly significant. Since a digital computer performs many simple operations it is natural to expect that the basic circuits are repeated many times. A multivibrator with two states (a flip-flop) is a basic circuit.

High Precision. A digital computer is most useful when high precision is needed, several independent variables are required, and when the program or instructions have several “forks” or possible paths. It is also useful when the input is inherently present in digital form.

Speed is a characteristic of digital computers. Many can perform more than 10,000 operations in one second. But, this does not mean that a given problem is solved faster than on an analog computer, for the faster digital machine (in terms of individual operations) may have to do thousands of operations to arrive at an answer. Memory capacity is high in many digital computers: experimental memories can now store 1,000,000,000 digits. UNIVAC, for example, has a magnetic tape memory for 86,000,000 digits.

THE HUMAN COMPUTER A human is a computer, and our own methods of calculating resemble both digital and analog. When a child counts on his fingers, he is computing with digits. When you lead a target with a shotgun, you are doing an analog computation. If you lay out a problem on paper, you are preparing a program.

The computer operates very quicklyâ€”far more quickly than any human operatorâ€” but it requires instructions for each step. In a sense, a digital computer may be thought of as a very fast clerk of limited intelligence.

While the differences between the human brain and the electronic computer (size, reliability, input-output, and organization) are important, the similarities are even more striking. All of the following points are indications of these similarities: Arithmeticâ€”Both can perform the basic operation of addition and by derivation, subtraction (negative addition), multiplication (repeated addition) and division (repeated subtraction).

Programâ€”Both can and do follow a fixed program, for problem solving and computing.

Decisionsâ€”Both can make decisions based upon the need for one or another course of action (a digital computer is good at this).