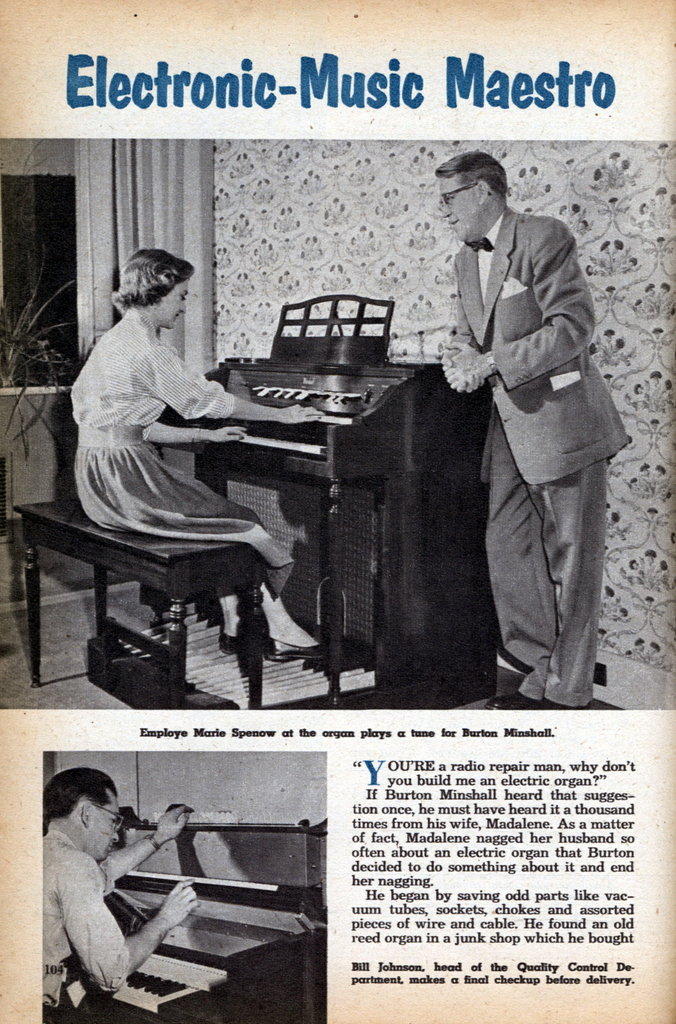 YOU’RE a radio repair man, why don’t you build me an electric organ?” If Burton Minshall heard that suggestion once, he must have heard it a thousand times from his wife, Madalene. As a matter of fact, Madalene nagged her husband so often about an electric organ that Burton decided to do something about it and end her nagging.

He began by saving odd parts like vacuum tubes, sockets, chokes and assorted pieces of wire and cable. He found an old reed organ in a junk shop which he bought for a song. Then he chopped it up and salvaged its physical movement. When he found another old, worn-out reed organ, he saved the five octave keyboard.

In a short time his living room looked like a Rube Goldberg workshop. To clean up the mess of strewn parts and tangled lengths of wire, he began his projectâ€” building an electronic organ. He worked in his spare time and often into the morning on week ends. Madalene patiently watched the musical instrument grow into a fine, finished spinet-type organ.

Proud of her husband’s unique handicraft and his talent for solving intricate electronic problems, Madalene enjoyed playing her home-built organ. The tonal quality was soft and resonant. Ever since Madalene was a little child she had dreamed of one day owning such a musical instrument but never could afford one. Now she played her favorite hymns, popular and classical selections and imitated the styles of her favorite pipe organ artists like Jesse Crawford and Ann Leaf.

One day, when a group of neighbors attended a small concert given by Madalene, they suggested to Minshall that he build them for sale.

“I was a sucker,” recalls Minshall, “and tried.”

As he began collecting spare parts for his second organ, he also surveyed the market. Church officials and pastors discouraged him from going into the organ business. They said that he couldn’t compete against the big organ firms. But undaunted, he continued his survey. This time he called on funeral directors in his home town of London, Ontario. “Don’t go into it. You’ll lose your shirt,” they warned him.

Minshall decided to give it a whirl anyway.

One day he borrowed a panel truck and loaded his homemade organ into it. Then he and his wife canvassed more funeral directors. Madalene demonstrated the organ by playing it while her husband tried to sell it. After an exhausting, all-day tour, they were about to call it quits and forget the organ building and selling business.

“There’s one more undertaker in town. We haven’t called on him,” said Madalene.

“What’s the use,” mourned Minshall. “We’re not built for this business.”

Madalene was adamant and persuaded her husband to call on this last prospect. He reluctantly agreed and after an hour’s demonstration and some high-powered salesmanship, sold the organ to the funeral director for $450. It was a cash deal, too. To Minshall, a radio serviceman who barely eked out a living for his wife and family, this lump sum of money was a windfall. It was the most money he had ever had at one time.

Encouraged by the sale, he worked nights and on week ends fashioning another organ, this time building it in his garage. It was a vast improvement over the first one. The tonal qualities were richer and he had, by now, ironed out many electronic bugs in the physical movement.

Once again Minshall and his wife borrowed a panel truck, and called on nearby funeral directors. “We called on these people,” said Minshall, “because we learned that when undertakers bought anything they could use they always paid cash on the line.” Cash was important to the Minshalls, now.

After a few days of door-to-door canvas-ing, Minshall was successful in unloading the organâ€”for $650. When he returned home that night he was faced with a tough decision. Should he quit his salaried job which was badly needed to support his growing family, or give up the idea of going into the organ manufacturing business? He finally decided to risk everything on his new venture. Borrowing the organ from the second undertaker who had bought it, he and his wife toured the provinces of Canada demonstrating and selling electric organs from the lone sample. Within a week, Minshall had sold six organs, all to undertakers.

As a result, he rented a small shop and bought parts to be assembled for his backlog of orders. Next, he hired six untrained people to help him. By the end of the year practically every undertaker in the area owned one of Minshall’s electric organs. He had built and sold 50 instruments each selling for $1,000â€” and this price happened to be $2,000 under that of the most popular organ on the market.

One advantage Minshall had over competitors was the fact that his organ didn’t require any special kind of instruction. Anyone who could play a piano could easily adapt his talents to his instrument. This in itself, became a terrific selling point for Minshall’s low-priced product.

Soon he branched out into larger quarters. He bought an abandoned school house for $2,100 and repaired it, converting it into a factory. He trained employees to make parts and assemble them into completed organs. With sufficient capital on hand, Minshall began to invade the church field.

Once, while on a demonstration tour, he had set his sample on the pulpit of a Toronto church. In the midst of prayer service, the packed house of worship suddenly heard strange voices emanating from the direction of the organ.

Minshall, sitting in a front pew, immediately recognized the trouble. By mistake, he had left the “swell” pedal that controls the volume wide open. Immediately, he apologized for the police short-wave signal and assured the minister and his church officers that it would never occur again. Later, Madalene demonstrated the qualities of the organ and Minshall wrapped up the sale. He developed a trap to eliminate future outside noises from creeping through his electronic circuit.

Up to now, Minshall was solely involved in selling his product direct to the consumer. To stay in business, he had to have dealers to represent him. For a long time he had no luck getting them. Then one day his big break came. The Heintzman chain of music stores, a long established and respected firm, ordered nine Minshall organs, one for each of their stores.

Minshall immediately used this sale as a selling point to make other dealer arrangements. When other music dealers learned that Heintzman stocked the organ, they climbed on the bandwagon. Soon, Minshall was selling to dealers all over the country and his plant boomed, working full blast.

In 1944, Minshall saw the need for his product in the United States. He surveyed many locations and finally settled in Brattleboro, Vt., the home of another established organ company. He produced an organ designed essentially for churches. They moved rapidly in the States. But while he did a good business with churches and funeral directors, it became obvious to him that he needed a more versatile instrumentâ€”one that could be sold to the home and one that could be used with small professional musical combos in night clubs, chapels aboard ship and on land where servicemen were stationed.

One day while visiting the piano buyer at Macy’s New York store, the buyer said: “Minshall, what you need are organs to sell for under $1,000. Get them and we can sell them faster than you can make them.”

Minshall headed for home with the buyer’s words ringing in his ears. It was a challenge. He corralled his electronic wizard, George Hadden, and told him the story. Together they took off their coats and went to work. For many months they worked in the shop, never taking a week end off.

They were on the verge of giving up when one day, on an automobile trip they had taken for rest and relaxation, Hadden sank into profound thought.

“Got what?” Minshall asked.

“Just what we’re looking for. An entirely new electronic circuit.”

When Minshall asked him to draw a plan of his sudden brainchild, he replied. “I can’t. It’s all in my mind.” The circuit, he explained, would divide frequencies and produce an ideal musical rave form.

For the next three weeks, Minshall, Hadden and another associate named Dick Campbell, worked around the clock trying to get the dream circuit to divide. Mathematically, it was possible. But physically, it didn’t seem to pan out.

“We were desperate,” recalls Minshall. “We simply had to lick the problem and put a low-cost organ on the market or go out of business.”

Finally, they came up with a frequency divider that used half the number of tubes in the tone generating system. A sample organ was built with the new circuit and in July, 1950, Minshall unveiled his product at the National Association of Music Merchants Convention in Chicago.

“Our dream organ,” says Minshall, “literally broke up the show.”

Dealers stampeded the Minshall crew during the four day show to the tune of $2,500,000 worth of orders.

He and his associates were kept busy writing orders day and night. One salesman, believe it or not, was pushed into the bathroom of the Minshall hotel suite and had to write out his orders using the top of the water basin as a desk.

“Boy,” he exclaimed later, “Was I glad to get out of there!”

Today the Minshall firm in Brattleboro produce more than 250 electric organs a month and does a yearly business amounting to over $4,000,000 wholesale.

Electronic experts confess that the Minshall organs are perhaps the simplest of the pure electronic organs being produced today. Prior to the new divider, it was necessary in some organ designs to employ hundreds of vacuum tubes and a raft of associated parts. “Now,” explains Minshall, “our new circuit makes possible a two-manual and pedal organ with 16 speaking stops all derived from only 36 tubes. Most two-manual electronic organs built with only one rank of tone generators have no way of providing separate registration on the two ranks. Our organ is so built that the swell and great stops are entirely independent of each other. What’s more, our organs employ no moving parts but we use a master oscillator frequency divider principle of tone generation.”

Minshall’s latest innovation to the home electronic-organ field is his “Tone-Arama.” Two speakers, one on each side of the spinet-type organ, instead of the usual single speaker, provide greater depth and clarity to the music. In addition to this new feature, Minshall offers a four-record album by Skitch Henderson which shows the average person how to play the organ in a few simple lessons.

Little did Mrs. Minshall think when she asked her husband to build an electronic organ that eventually he would be turning out 3,000 a year.