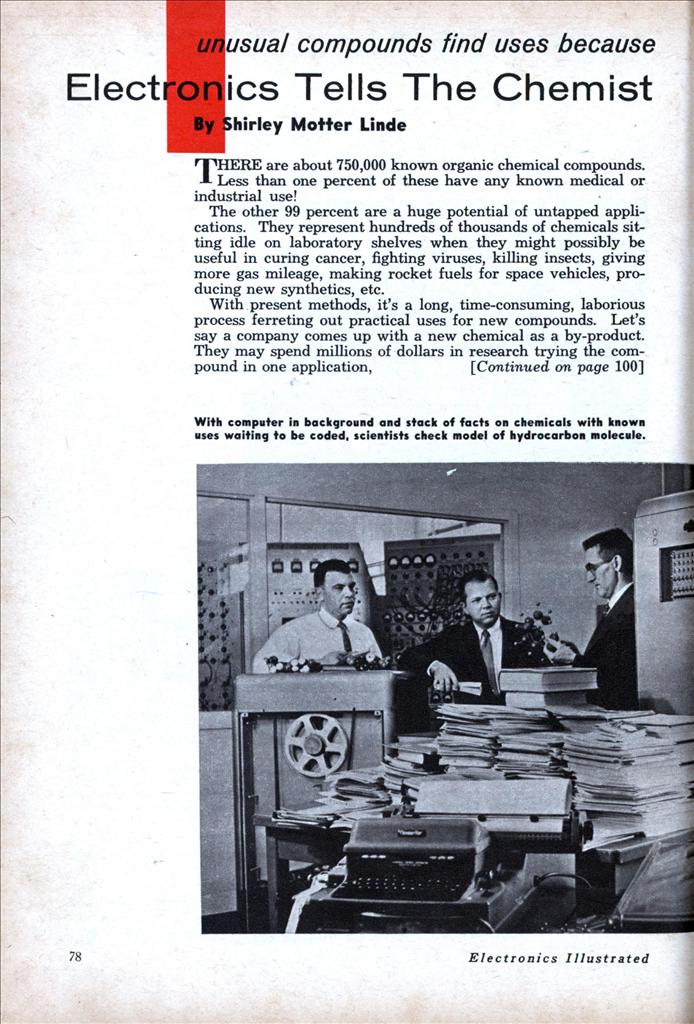 THERE are about 750,000 known organic chemical compounds. Less than one percent of these have any known medical or industrial use!

The other 99 percent are a huge potential of untapped applications. They represent hundreds of thousands of chemicals sitting idle on laboratory shelves when they might possibly be useful in curing cancer, fighting viruses, killing insects, giving more gas mileage, making rocket fuels for space vehicles, producing new synthetics, etc.

With present methods, it’s a long, time-consuming, laborious process ferreting out practical uses for new compounds. Let’s say a company comes up with a new chemical as a by-product. They may spend millions of dollars in research trying the compound in one application,

then another trying to find a use. After years of hit or miss research, they might be successful.

Or the company may catalog the fundamental characteristics of the compound and pass the information on to other industries in hopes of receiving suggestions on how the substance might be developed.

Or, if the compound looks like it might work as, say, an insecticide, the company might ask an insecticide expert to compare its properties with known bug killers and decide whether it’s feasible.

All this set scientists at the Midwest Research Institute, Kansas City, Mo., to wondering whether a program might be developed to determine, with the aid of electronic computer techniques, the structural and physical properties which correlate the uses of chemical compounds.

Institute chemist Richard A. Carpenter said, “The mental processes of the expert led us to think of employing rapid electronic equipment to simulate his decisions. Since the expert bases his decisions on the comparison of the new compound with the properties and structures of materials previously found promising, this information could be coded and processed into a memory device. The results would be a sort of ‘super chemist’ armed with millions of facts, correlations and significant patterns from past experience and research. This ‘super chemist’ would be equipped with a never-failing memory able to make many comparisons simultaneously without bias and at a high rate of speed.,,

Like the expert, the computer could calculate, compare, correlate, and come up— in minutes—with possible uses for the new compound.

For example, says Carpenter, the computer can be used to pick out likely chemicals to treat cancer. So far, he points out,

cancer research has been a matter of blindly trying everything that comes along in hopes of a cure. Over 20,000 compounds have been tried already. The computer, on the other hand, can analyze the common characteristics of the more promising substances and pin-point similar but different substances offering the most promise for further experimentation.

Much preliminary work was necessary even before the computer could be called into play. The research team wrote to 1,000 companies for catalogs and data sheets on their compounds. The material poured in. Hundreds of thousands of facts on boiling points, densities, formulas, and uses had to be coded and punched onto computer input cards. A system had to be devised for transcribing that data onto a magnetic tape. This process is still under way.

Monthly trips are made to Washington, D. C, to make use of the huge Vanguard computation center. Only about five minutes a month are allowed the researchers, however, because the computer priority is alloted to satellite problems. But those five minutes are the equivalent of 25 years of desk computing time. It takes researchers three weeks to get enough information together to take up the five minutes on the computer.

After two years of painstaking work, the research team has assembled and coded facts about almost all the 3,000 compounds with known uses. These facts will serve as the computer’s memory. Within a few months the entire memory system will be complete. Then the electronic computer, with its high-speed classifying system, will start on practical problems.

What will be the impact of this electronic brain on chemistry? Says Carpenter: “It will certainly stimulate research, reveal better chemicals for many old and new uses, cut development costs by making research more efficient and productive, generate new knowledge by revealing normally obscured correlations, and most significantly, it will substitute a methodology for the current confusion.”