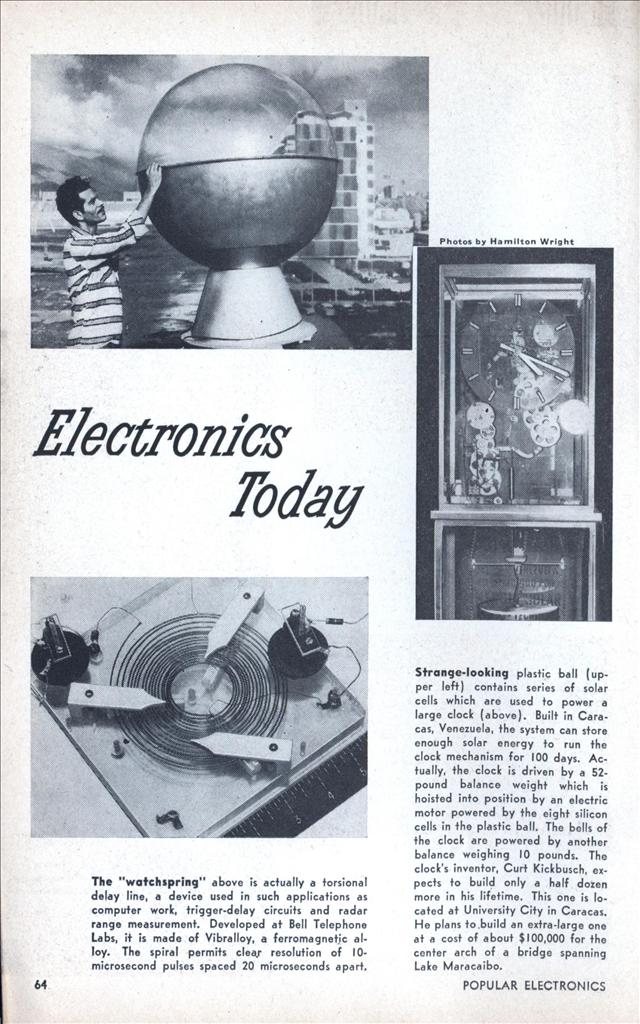 The “watchspring” above is actually a torsional delay line, a device used in such applications as computer work, trigger-delay circuits and radar range measurement. Developed at Bell Telephone Labs, it is made of Vibralloy, a ferromagnetic alloy. The spiral permits clear resolution of 10-microsecond pulses spaced 20 microseconds apart.

Strange-looking plastic ball (upper left) contains series of solar cells which are used to power a large clock (above). Built in Caracas, Venezuela, the system can store enough solar energy to run the clock mechanism for 100 days. Actually, the clock is driven by a 52-pound balance weight which is hoisted into position by an electric motor powered by the eight silicon cells in the plastic ball. The bells of the clock are powered by another balance weighing 10 pounds. The clock’s inventor, Curt Kickbusch, expects to build only a half dozen more in his lifetime. This one is located at University City in Caracas. He plans to build an extra-large one at a cost of about $100,000 for the center arch of a bridge spanning Lake Maracaibo.

A camera writes Its own captions! The illustration above shows how position, altitude and other pertinent data necessary to Air Force reconnaissance can be recorded automatically on photos. Developed by Federal Telecommunication Labs, the Digital Data Recording Device records all data in coded dot form (lower right on photo). During development, a ground-based reader decodes and prints data under picture.

Tiny silicon carbide rectifier being heated red-hot by a torch (above) continues to change alternating to direct current in spite of the heat, as shown by oscilloscope trace in background. Developed by Westinghouse, the rectifier is the result of a new method of preparing ultra-pure silicon carbide. It will be used in rockets and missiles.

The Tennessee Highway Patrol and Civil Defense bus below is ready for any emergency. Stock towers made by Tele-Vue lie flat across the top of the bus until needed, then swiftly crank up to their maximum vertical position of 45 feet. In addition, the bus carries six transmitters and receivers which can be operated simultaneously, and a generator which can be rigged to supply a hospital or other such center with emergency power. The bus, built at a cost of about $14,000, will be used in such disasters as flood, tornado or forest fire by the patrol.