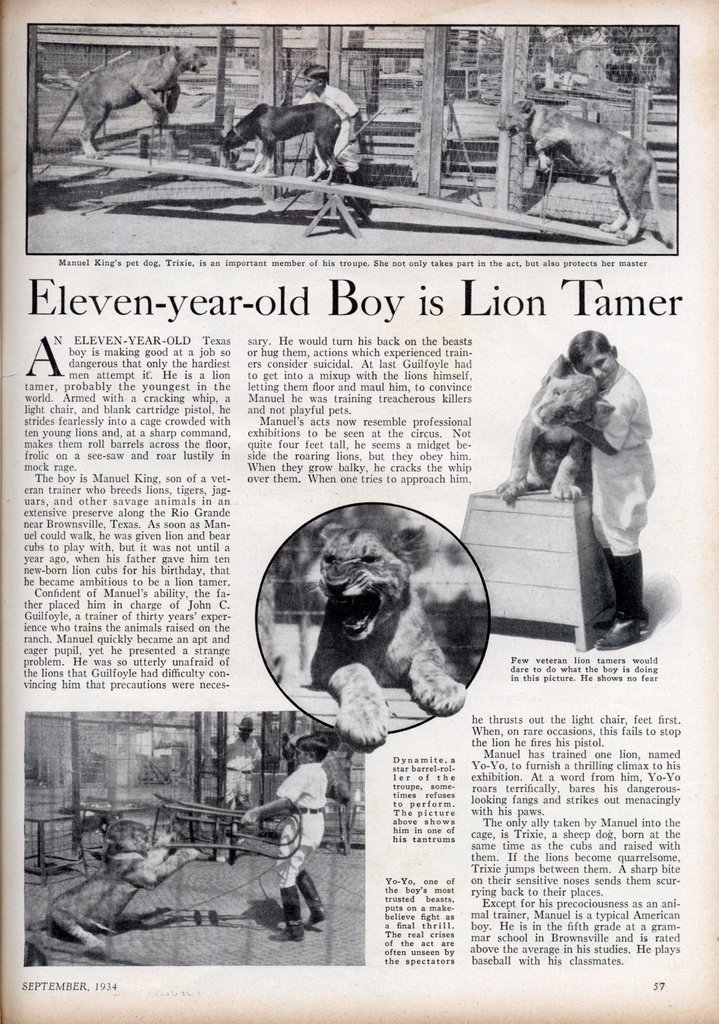 AN ELEVEN-YEAR-OLD Texas boy is making good at a job so dangerous that only the hardiest men attempt it. He is a lion tamer, probably the youngest in the world. Armed with a cracking whip, a light chair, and blank cartridge pistol, he strides fearlessly into a cage crowded with ten young lions and, at a sharp command, makes them roll barrels across the floor, frolic on a see-saw and roar lustily in mock rage.

The boy is Manuel King, son of a veteran trainer who breeds lions, tigers, jaguars, and other savage animals in an extensive preserve along the Rio Grande near Brownsville, Texas. As soon as Manuel could walk, he was given lion and bear cubs to play with, but it was not until a year ago, when his father gave him ten new-born lion cubs for his birthday, that he became ambitious to be a lion tamer. Confident of Manuel’s ability, the father placed him in charge of John C. Guilfoyle, a trainer of thirty years’ experience who trains the animals raised on the ranch. Manuel quickly became an apt and eager pupil, yet he presented a strange problem. He was so utterly unafraid of the lions that Guilfoyle had difficulty convincing him that precautions were necessary. He would turn his back on the beasts or hug them, actions which experienced trainers consider suicidal. At last Guilfoyle had to get into a mixup with the lions himself, letting them floor and maul him, to convince Manuel he was training treacherous killers and not playful pets.

Manuel’s acts now resemble professional exhibitions to be seen at the circus. Not quite four feet tall, he seems a midget beside the roaring lions, but they obey him. When they grow balky, he cracks the whip over them. When one tries to approach him he thrusts out the light chair, feet first. When, on rare occasions, this fails to stop the lion he fires his pistol.

Manuel has trained one lion, named Yo-Yo, to furnish a thrilling climax to his exhibition. At a word from him, Yo-Yo roars terrifically, bares his dangerous-looking fangs and strikes out menacingly with his paws.

The only ally taken by Manuel into the cage, is Trixie, a sheep dog, born at the same time as the cubs and raised with them. If the lions become quarrelsome, Trixie jumps between them. A sharp bite on their sensitive noses sends them scurrying back to their places.

Except for his precociousness as an animal trainer, Manuel is a typical American boy. He is in the fifth grade at a grammar school in Brownsville and is rated above the average in his studies. He plays baseball with his classmates.