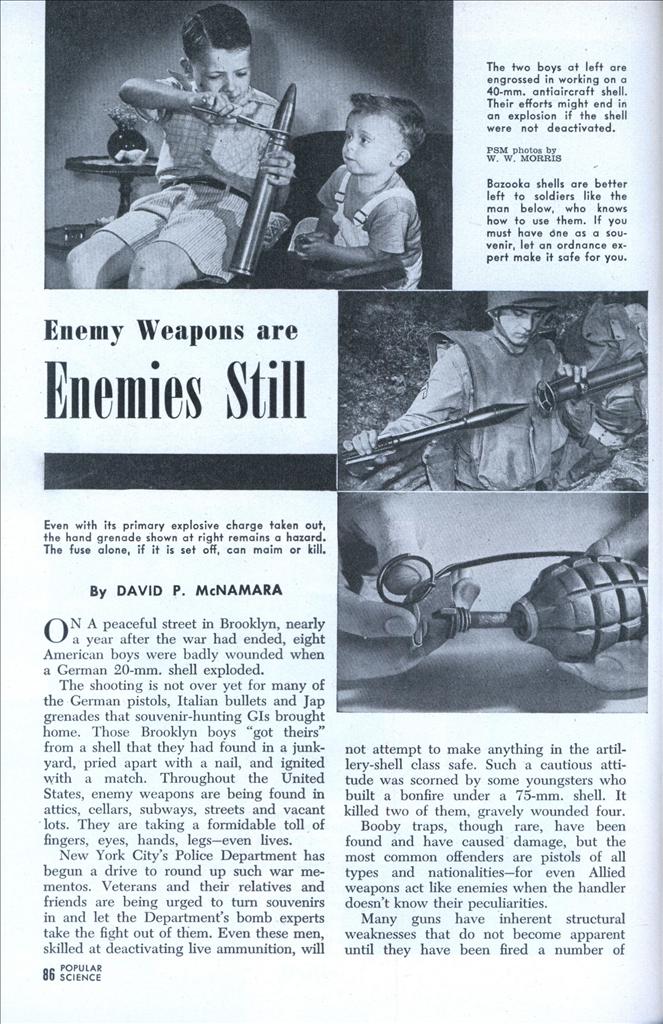 ON A peaceful street in Brooklyn, nearly a year after the war had ended, eight American boys were badly wounded when a German 20-mm. shell exploded.

The shooting is not over yet for many of the German pistols, Italian bullets and Jap grenades that souvenir-hunting GIs brought home. Those Brooklyn boys “got theirs” from a shell that they had found in a junkyard, pried apart with a nail, and ignited with a match. Throughout the United States, enemy weapons are being found in attics, cellars, subways, streets and vacant lots. They are taking a formidable toll of fingers, eyes, hands, legs—even lives.

New York City’s Police Department has begun a drive to round up such war mementos. Veterans and their relatives and friends are being urged to turn souvenirs in and let the Department’s bomb experts take the fight out of them. Even these men, skilled at deactivating live ammunition, will not attempt to make anything in the artillery-shell class safe. Such a cautious attitude was scorned by some youngsters who built a bonfire under a 75-mm. shell. It killed two of them, gravely wounded four.

Booby traps, though rare, have been found and have caused damage, but the most common offenders are pistols of all types and nationalities—for even Allied weapons act like enemies when the handler doesn’t know their peculiarities.

Many guns have inherent structural weaknesses that do not become apparent until they have been fired a number of times. The Walther P-38, a popular souvenir, is a good example. This German automatic is dangerously unreliable because the mechanism permits the hammer to hit the firing pin even when the safety is on. When this happens repeatedly the pin weakens and may break and fire the pistol accidentally.

Many of the German Luger pistols are unsafe because they were made with odd parts, and some are worn out from long use. If the laws of your particular region allow you to keep one of these weapons, you should have it checked by an ordnance expert.

Ammunition for all foreign weapons is dangerous for anyone who does not know what the code markings on the shell casings mean. They indicate different kinds of shells. Thirty kinds fit the 8-mm. Mauser, which was the standard German army rifle.

Test shells are especially hazardous. Used to test the strength of new guns, they contain an abnormal amount of powder. Guns loaded with test shells are normally placed in a steel box and fired by remote control. If test shells are hand-fired in a rifle or pistol a few times, the weapon is likely to explode in the user’s face.

Japanese ammunition is completely unreliable, and the Italians had all sorts of unpredictable ammunition. Some of their shells—no one knows why—were filled with sand. Other projectiles consist of three or four pieces of lead, which separate in flight like shrapnel.

Children and civilians are not the only victims of war souvenirs. In several instances, soldiers who went through the fighting without getting hurt have been seriously injured at home by shells or “duds” that they thought were safe. One ex-GI, trying to make a cigarette lighter out of a .50 caliber shell casing, mutilated his hand when he exploded the primer in the base of the shell by driving a nail into it.

Take these tips from the N. Y. police: Never try to fire a weapon with which you are not familiar.

Never attempt to use foreign-made ammunition, even in a weapon you know well.