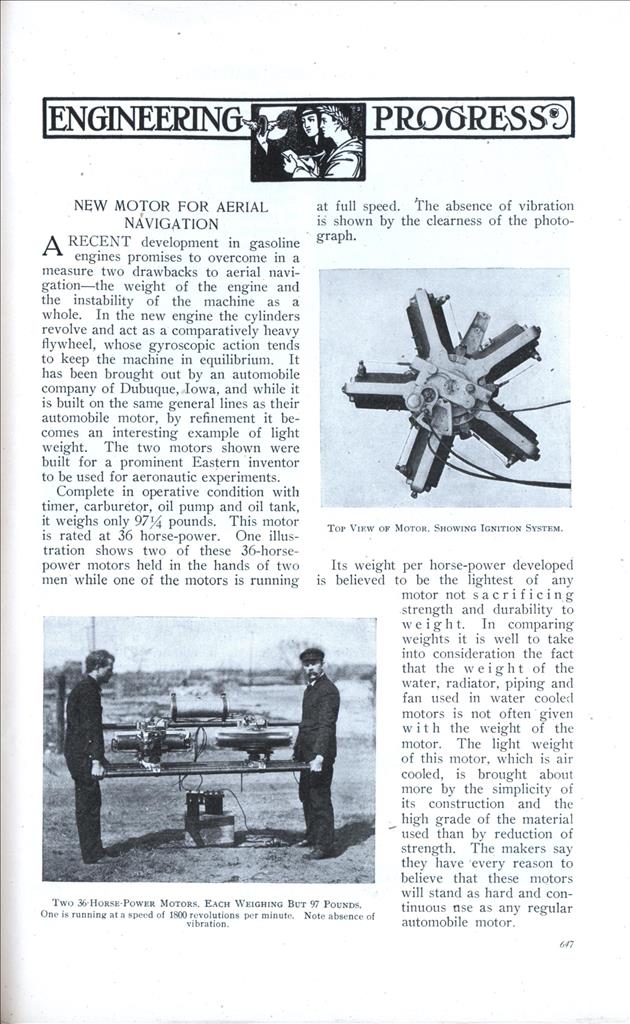 A RECENT development in gasoline engines promises to overcome in a measure two drawbacks to aerial navigation—the weight of the engine and the instability of the machine as a whole. In the new engine the cylinders revolve and act as a comparatively heavy flywheel, whose gyroscopic action tends to keep the machine in equilibrium. It has been brought out by an automobile company of Dubuque, Iowa, and while it is built on the same general lines as their automobile motor, by refinement it becomes an interesting example of light weight. The two motors shown were built for a prominent Eastern inventor to be used for aeronautic experiments.

Complete in operative condition with timer, carburetor, oil pump and oil tank, it weighs only 97-1/4 pounds. This motor is rated at 36 horse-power. One illustration shows two of these 36-horse-power motors held in the hands of two men while one of the motors is running at full speed. The absence of vibration is shown by the clearness of the photograph.

Its weight per horse-power developed is believed to be the lightest of any motor not sacrificing strength and durability to weight. In comparing weights it is well to take into consideration the fact that the weight of the water, radiator, piping and fan used in water cooled motors is not often given with the weight of the motor. The light weight of this motor, which is air cooled, is brought about more by the simplicity of its construction and the high grade of the material ‘ used than by reduction of strength. The makers say they have every reason to believe that these motors will stand as hard and continuous use as any regular automobile motor.

While no weight is added for flywheel, the revolving element that is utilized for balance wheel is over 80 per cent of the entire weight of the motor. This heavy fly-wheel revolving rapidly around a vertical axis exerts an enormous gyroscopic force to keep the motor and that to which it is attached in a true plane. The motor spins like a top, and like a top it has a tendency to resist being tipped over while spinning. It also has a tendency quickly to right itself if forcibly thrown out of its proper running plane. This force can be utilized to maintain equilibrium in a flying machine.

The feature of cooling is one of the most important for aeronautic use. Without one ounce of cooling device the makers claim the best cooled of all gasoline motors. Centrifugal force removes the air in contact with the cylinders and atmospheric pressure supplies fresh air.

AT Niagara Falls on the Canadian side there is now in operation the largest alternating current dynamos in the world. At present there are four machines installed, although the number of machines will be ultimately increased to twelve, when the plant in which these huge machines have been placed, is completed. Each generator has a normal capacity of 13,500 horse-power. The current is generated at 12,000 volts, 3 phase, 25 cycles. The field is of the revolving type and consists of twelve poles direct-connected to the water wheel shaft, which has a speed of 250 revolutions a minute. The stationary armature surrounds the revolving field.

The power-house is of classical design, and although but one wing and the central portion are completed, it is well worthy of a visit. From this power plant current at a pressure of 60,000 volts is transmitted to Toronto, Canada, where it is used for various industrial and manufacturing purposes.

THE accompanying illustration shows a traction engine and the house which it moved seven miles in a single day. This was near Spencer, Iowa. The feat may be regarded as remarkable when the size of the house is considered.

The tractor, with the exception of the wheels, has very much the appearance of a steam railway locomotive. The rear wheels are 65 inches high and have a face of 20 inches; the front wheels measure 49 inches high, with a face of 10 inches. There is a special steam steering device provided, geared to the steering worm shaft. By a clever valve gear and a bell crank connecting with a collar and sleeve on a shaft running to the steering wheel in the cab, the engineer is enabled to do the steering by turning the wheel in the usual way.

The steam steering device does all the work of steering the engine, the engineer turning the idle wheel either to the right or to the left, depending on which direction he wishes the engine to go. When he quits turning the wheel the steering engine shuts itself off and the steering apparatus remains in that position until a change is desired. Or, if so wished, the steam steering device may be allowed to remain at rest and the engine guided by hand in the usual way. This device is a new and advanced steering attachment designed especially for heavy hauling and steam plowing purposes, and is greatly appreciated by the engineers in charge of the tractor. .

FRANCE’S new dirigible balloon, the Clement-Bayard, made a successful flight recently from Sartrouville to above the Bourse, Paris, returning to and landing safely at Sartrouville.

Henry Kapferer, who formerly steered the Ville de Paris, was at the wheel of the Clement-Bayard. Its speed was greater than that attained by any dirigible balloon hitherto.

A NEW filter, a spherical apparatus.

termed the “Turnover” Filter, is a recent invention in Scotland, where it has been adopted by many of the large linen mills and used with great success in the purification of water.

The discoveries of bacteriology have long emphasized the hygienic importance of uncontaminated water for purposes of domestic consumption, and with the increase in population and the growth of manufacturing open water beds have become so liable to pollution from effluents, waste products, emulsified oils, and other collective impurities, that softening processes and mechanical filtration have now become necessary for the various requirements of industrial activity. Bleachers and dyers, textile factories, paper makers, and manufacturers generally, who rely upon feed water for boiler supply, evince an increasing interest in the subject of mechanical filtration.

This new invention is spherical in construction and is cleansed by a rotating process, during which the filtering bed of fine indestructible quartz is completely reversed with each revolution- of the filter. The scouring action, accompanying the shifting of the filtering bed, is claimed to be a distinct merit, as it effectively removes all adhering matter from the inside of the filtering receptacle, at the same time throwing to the surface a new portion of the filtering body. Other concomitant advantages of the turnover system are: the expense of erecting elevated reservoir tanks to supply cleansing water under pressure is avoided; low-priced centrifugal pumps operating at low heads can be substituted in conjunction with the turnover filter for more expensive machines; the filtering chamber can be examined at will without removing the filtering material, by a simple revolution of the sphere; large types of filters, with a capacity up to thirty thousand gallons an hour, clean as easily as the smaller types. CURIOUS FERRY AT GLASGOW HARBOR.

FOR carrying loaded wagons across the harbor at Glasgow, Scotland, a somewhat unusual type of ferry-boat has been put in operation. A platform, which may be raised and lowered, carries the vehicles. This platform is built up of H girders, connected at the ends to massive built steel girders on each side of the vessel. The supporting screws are fitted with worm-wheels of special material, gearing at the lower ends with forged steel worms, working in oil baths. A separate triple-expansion three-crank engine is fitted for the purpose of raising or lowering the main platform. This engine is of the inverted type and connects to the worms by machine-cut bevel and spur-gearing of cast steel; automatic gear is fitted on this engine to prevent the platform being raised or lowered beyond its intended travel. A brass indexed tell-tale is also fitted in a prominent position in the engine-room to show in feet and inches the position of the platform.

There are no rudders, the vessel being manoeuvred entirely by the propelling machinery. In the controlling-house the two reversing-handles” are situated one on each side of the steerman’s position. Two Chadburn’s direction tell-tales and tachometers are also provided and fixed in this house, giving the number of revolutions and direction of the propelling-engines. Chadburn’s telegraphs to main and elevating engines are also fitted; the former are only intended for use in case of emergency. The vessel throughout is of massive design, all parts having been carefully constructed for their respective purposes. The platform is intended to carry sixteen loaded wagons, but with a mixed cargo as many as twenty vehicles can be accommodated on board.

STRANGE WAY TO SAVE LIGHTS.

ON a sunken reef 350 feet distant from Stornoway Lighthouse is a remarkable beacon which warns mariners with the help of a light which is only apparent. The beacon is a cone of cast-iron plates, surmounted with a lantern containing a glass prism. The prism derives its light from refracting the rays emitted from the lighthouse, and the optical delusion is marvelous. Mariners naturally suppose that there is a lighted lamp on the beacon itself, and many of them will not believe otherwise. But the object of the beacon is attained when the navigator sees the reflected light, which indicates the perilous rock below. This beacon has been in use more than half a century, and since it was fixed in position others have been placed in other neighborhoods to make clear points of danger.