Popular Mechanics
Issue: Apr, 1924
Posted in: How to, Movies
Tags: how its made
No Comments on Engineering the Magic Carpet’s Flight (Apr, 1924) 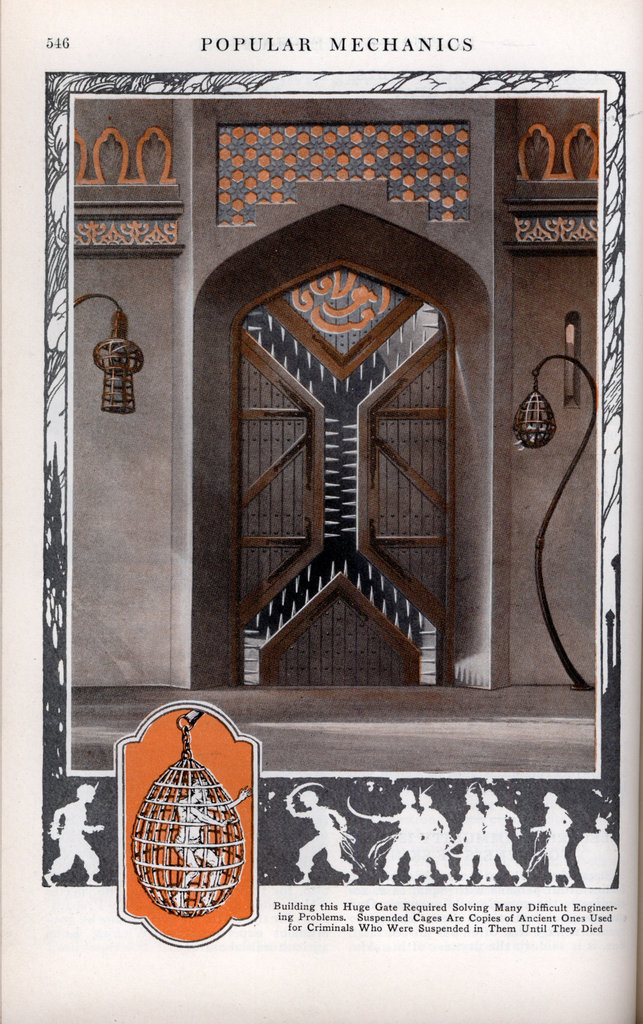 BUILD me a magic carpet on which I can ride; a flying horse like Pegasus and arrange a set so that I can disappear in a whirlwind.”

The “boss” of the moving-picture lot, without more ado, walked out of his chief engineer’s office, leaving that hard-working individual the three problems which he mentally added to the score or more of similar commands he had executed since the actual “shooting” of the scenes in the huge spectacle had begun months ago. For the engineering staff of the larger moving-picture producers is used to facing and conquering problems that for sheer unusual-ness are perhaps unrivaled.

As the theater patron watches the unfolding of the silent drama and sees huge buildings flashed on the screen, great idols being worshiped or destroyed, hordes of actors engaged in furious warfare, castles being besieged, glimpses of seemingly ancient wagons hauling victims of the French revolutionaries’ rage to the gaunt, terrifying gibbetâ€”as he follows the thread of the storyâ€”but a passing thought is given to the astonishing accomplishments of the engineer.

A visit to the plants of the moving-picture industry leaves the spectator with at least one assuranceâ€”that few scenes in any of the so-called “super-spectacles” would be possible at all were it not for the services and skill of the engineer and other highly trained technical men. Every branch of mechanical knowledge is put into action when the “boss” gets an idea. Walls must be made solidly of concrete, but constructed so that they can be removed with ease when they have served their purpose. To be sure, a great many of these seemingly huge buildings are but shellsâ€”perhaps just “fronts”â€”but even these must be made in such a way that hundreds of persons may “act” upon them without fear of a fall or of the collapse of the structure. To create a whirlwind to accommodate an actor who wishes to disappear is not simple, yet the engineer who says, “I can’t,” quickly gets another position.

In the designing of a huge gateway to represent the childish whim of an ancient ruler of the Far East, one of the most perplexing problems of the engineering department of one big producer was solved. The gate had to part into four sections, one sinking into the ground, another being drawn upward and the two sides being pulled away from each other and into the castle wall. Since the gate could not be square, the two sides traveled a shorter distance in being withdrawn than did the top and bottom pieces. A nice problem in mechanics was thus involved. Again, the door being of wood, it was difficult to build it sufficiently rigid to insure that the teeth, with which the edges of the four parts were armed, would come together accurately. Yet, although completed the gate weighed seven tons, its mechanism was so skillfully designed that one man could operate it by means of a series of pulleys and cables. Incidentally, it was conceived by one of the workmen and cost $8,000.

Particularly difficult was the task confronting the engineers in a sensational drama where, because the story concerned a fairy tale, as few straight lines as possible were demanded. Stairways were crooked and in proportions only reasonable in a dream; windows were of odd outline; streets were “crazy” shaped; caverns and strange gods vied with intricately molded metal cages big enough to imprison full-grown men and hovels and palaces of the strangest aspect. A scene was desired showing a cross – sectional view of a thieves’ burrow beneath the surface of the ground, yet with many galleries and peep-holes from which the rascals could note the passing of a caravan of riches. Engineers devised such a structure supplied with a “cover” which, when fitted over the cave, restored the scene to an “above-ground” view. Huge rollers and pulleys were specially made to move this great bulk of material back and forth as the occasion demanded. While a great deal of the responsibility for the making of copies of such “property” as submarines, steamships, airplanes, railroad coaches and so forth, rests on the carpenters and workers in other trades, yet the engineer finds himself called upon frequently to figure out stresses, leverages and other secrets of his profession for the use of the craftsmen. Being unable to secure the loan of real submarines from the government, one producer not long ago set about building one that was 100 feet long, with a beam of fifteen feet and a draft of four feet. The engineer was told that the craft had to be of sufficient strength to withstand submergence to a depth of more than forty feet; would have to be provided with tanks, so that it could take on water to sink it to that depth, while compressed air must be furnished to blow out the water when it was necessary to raise the boat to the surface. The director also wanted torpedo tubes big enough for standard size missilesâ€”and he wanted it all in a hurry. The “sub” was made of sheet iron, but it required six months of constant labor to build it.

In a recent war play, four giant siege guns were needed. The engineers finally produced wooden weapons which recoiled with full realism when the tiny charge of powder was exploded in their iron-lined barrels. And the variety of the engineer’s tasks is limitless. It was desired . that an actor in. a comedy take hold of a live lion’s tail and bite it The engineer was finally called in and asked how mechanics could help save the actor from the lion’s displeasure, for even a studio lion has emotions.

“Have both actor and lion perform on a moving platform,” the engineer advised. “The lion won’t turn around to strike the actor in that case.” And so it proved.

For the purpose of another comedy the engineer was told to devise some means whereby a comedian could sail through the air hanging to an ostrich’s tail-feathers. The engineer devised overhead strutwork attached to an automobile which followed the running bird and the actor suspended by an invisible wire from the overhead platform.

From the days when Thomas Edison was experimenting with the “movies” and engineers were called in to build a studio on a turntable so that it would follow the sun during the day and thus permit of taking pictures indoors continuously, to the present when realism must be observed and minute details of mechanical construction followed faithfully, the engineer has been associated with the business. Not only is his science called in for replicas of modern inventions, but he must know how to build vehicles and machines of days long gone. It was he who designed and instructed the carpenters in building medieval wagons for a recent picture. The shafts, wheels and bodies were whittled out by hand to simulate the old-time carts.

The work of the engineer begins with the acceptance by the directors of the scenario. Following the adoption of an idea, the studio’s re-search menâ€”they may be college professors or other trained scientistsâ€”gather all imaginable data on the period and people of the time and countries involved. Artists then make free-hand drawings of how they think the scenes should be made.

Once these are accepted, draftsmen redraw the artists’ conceptions to absolute scale. From these blueprints, small models are made. Then comes in the engineer who, from his knowledge of mechanics, weeds out the impossibleâ€”if such a thing exists in the mind of a movie engineerâ€”and gives advice on the practicable.

The finished blueprints are then turned over to the car-penter and his crew, the plasterers, the masons, the bricklayers and â€”the engineer. The latter “bosses the job” until it is done. He is the man who finds a way to make Pegasus fly, to give the star a safe ride on a magic carpet, to waft the villain away in a cyclone and â€”to make it all seem real to the man or woman who has paid to enjoy a couple of hours of thrills or laughter in the neighborhood movie.

To meet the demand for realism railways have been built on mountainsides on which trains have been wrecked, gaunt skeletons of ocean liners erected on dry land and deserts turned into populous cities.