England Now Has Gasoline Made from Coal (Feb, 1934) 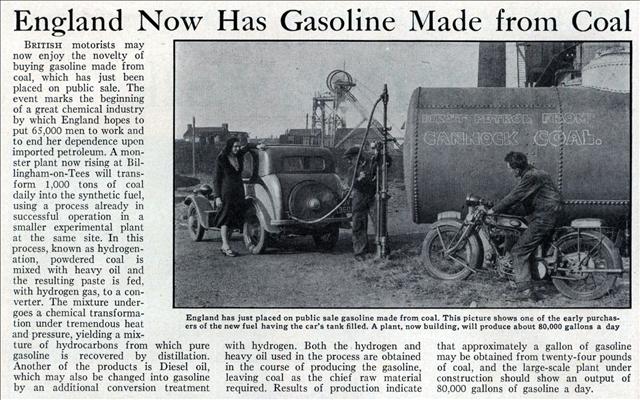 England Now Has Gasoline Made from Coal

British motorists may now enjoy the novelty of buying gasoline made from coal, which has just been placed on public sale. The event marks the beginning of a great chemical industry by which England hopes to put 65,000 men to work and to end her dependence upon imported petroleum. A monster plant now rising at Billingham-on-Tees will transform 1,000 tons of coal daily into the synthetic fuel, using a process already in successful operation in a smaller experimental plant at the same site. In this process, known as hydrogenation, powdered coal is mixed with heavy oil and the resulting paste is fed, with hydrogen gas, to a converter. The mixture undergoes a chemical transformation under tremendous heat and pressure, yielding a mixture of hydrocarbons from which pure gasoline is recovered by distillation. Another of the products is Diesel oil, which may also be changed into gasoline by an additional conversion treatment with hydrogen. Both the hydrogen and heavy oil used in the process are obtained in the course of producing the gasoline, leaving coal as the chief raw material required. Results of production indicate that approximately a gallon of gasoline may be obtained from twenty-four pounds of coal, and the large-scale plant under construction should show an output of 80,000 gallons of gasoline a day.