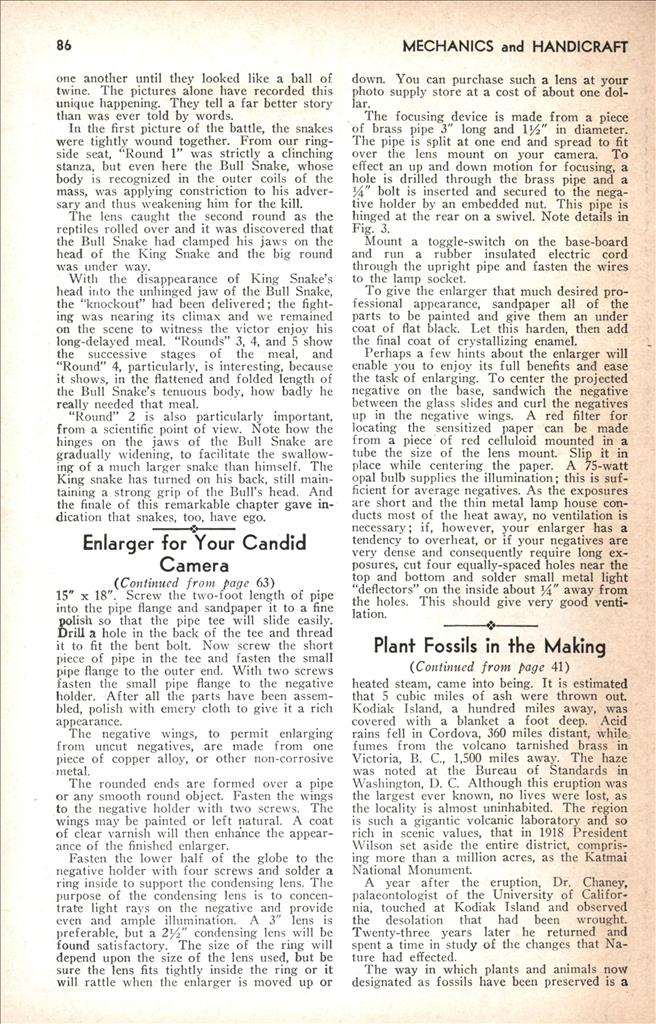 THE efficiency of a homemade enlarger depends upon the care given during construction and the type of lens used. If your camera has a back which can be completely removed, and the camera uses a spring sliding-tube focus, the focusing device illustrated here can be used. On cameras with a different type of mount the focusing device will be unnecessary. Cameras without a removable back can be used by detaching the lens from the camera and fastening it directly to the enlarger.

Making use of your camera will minimize the cost greatly; however, you may purchase a second-hand lens and mount it directly and permanently on the enlarger. If you decide to use your own camera, some means will have to be devised for clamping it, temporarily, to the enlarger. On the “spring” type the focusing device supports the camera. With other types of cameras, heavy rubber bands will hold them in place securely enough for use.

An attractive and inexpensive feature is the lamp house, made from a twenty-five-cent metal world globe, 6″ in diameter. Be sure the globe is of metal; the papier-mache kind will not prove satisfactory.

After securing the globe, separate it at the “equator” line. Cut a hole at the “north pole”

and solder a socket in place, taking care to see that no light leaks around the joint. Cut another hole two inches in diameter at the “south pole,” using the latitude line for a marker. Cut equally spaced segments around the hole and bend them so the globe will set flat on the negative holder.

The negative holder is the main body of the enlarger; it supports the globe on the top, the glass slides for holding the negative, at the center, and the camera and negative wings on the bottom. It is constructed from white pine, because this wood is easy to work and is sufficiently strong. The wood for the en-larger shown in the illustrations was obtained from the ends of an apple box.

Fig. 3 shows how three pieces of wood are sandwiched together to form the negative holder, so named because it contains the glass slides and negative while enlarging.

The simplest part of the en-larger is the enlarger support, made from pipes threaded and cut by any pipe fitter; all you have to do is assemble it. The parts necessary are: two feet of 3/4″ pipe threaded at one end; 3″ of 1/2″ pipe threaded at both ends; two pipe flanges, one to fit a pipe and a smaller one to fit a 1/2″ pipe; a tee connection, reamed out to fit over the two-foot length of pipe, with threads in the other end to fit the 3″ length of pipe; and a 1/4-20 bolt bent to form a lock screw. To assemble the enlarger support, fasten the large pipe flange to the base—a piece of five-ply veneer, 15″ x 18″. Screw the two-foot length of pipe into the pipe flange and sandpaper it to a fine polish so that the pipe tee will slide easily. Drill a hole in the back of the tee and thread it to fit the bent bolt. Now screw the short piece of pipe in the tee and fasten the small pipe flange to the outer end. With two screws fasten the small pipe flange to the negative holder. After all the parts have been assembled, polish with emery cloth to give it a rich appearance.

The negative wings, to permit enlarging from uncut negatives, are made from one piece of copper alloy, or other non-corrosive metal.

The rounded ends are formed over a pipe or any smooth round object. Fasten the wings to the negative holder with two screws. The wings may be painted or left natural. A coat of clear varnish will then enhance the appearance of the finished enlarger.

Fasten the lower half of the globe to the negative holder with four screws and solder a ring inside to support the condensing lens. The purpose of the condensing lens is to concentrate light rays on the negative and provide even and ample illumination. A 3″ lens is preferable, but a 2-1/2″ condensing lens will be found satisfactory. The size of the ring will depend upon the size of the lens used, but be sure the lens fits tightly inside the ring or it will rattle when the enlarger is moved up or down. You can purchase such a lens at your photo supply store at a cost of about one dollar.

The focusing device is made from a piece of brass pipe 3″ long and 1-1/2″ in diameter. The pipe is split at one end and spread to fit over the lens mount on your camera. To effect an up and down motion for focusing, a hole is drilled through the brass pipe and a 1/4″ bolt is inserted and secured to the negative holder by an embedded nut. This pipe is hinged at the rear on a swivel. Note details in Fig. 3.

Mount a toggle-switch on the base-board and run a rubber insulated electric cord through the upright pipe and fasten the wires to the lamp socket.

To give the enlarger that much desired professional appearance, sandpaper all of the parts to be painted and give them an under coat of flat black. Let this harden, then add the final coat of crystallizing enamel.

Perhaps a few hints about the enlarger will enable you to enjoy its full benefits and ease the task of enlarging. To center the projected negative on the base, sandwich the negative between the glass slides and curl the negatives up in the negative wings. A red filter for locating the sensitized paper can be made from a piece of red celluloid mounted in a tube the size of the lens mount. Slip it in place while centering the paper. A 75-watt opal bulb supplies the illumination; this is sufficient for average negatives. As the exposures are short and the thin metal lamp house conducts most of the heat away, no ventilation is necessary; if, however, your enlarger has a tendency to overheat, or if your negatives are very dense and consequently require long exposures, cut four equally-spaced holes near the top and bottom and solder small metal light “deflectors” on the inside about 1/4″ away from the holes. This should give very good ventilation.