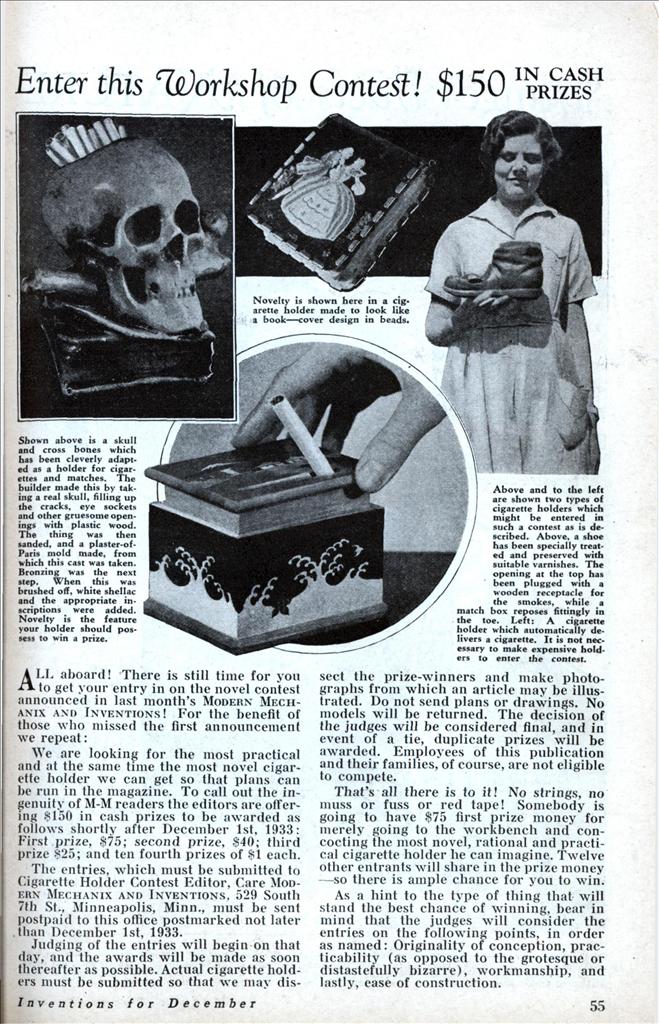 ALL aboard! There is still time for you to get your entry in on the novel contest announced in last month’s Modern Mechanix and Inventions! For the benefit of those who missed the first announcement we repeat: We are looking for the most practical and at the same time the most novel cigarette holder we can get so that plans can be run in the magazine. To call out the ingenuity of M-M readers the editors are offering 8150 in cash prizes to be awarded as follows shortly after December 1st, 1933: First prize, $75; second prize, $40; third prize $25; and ten fourth prizes of $1 each.

The entries, which must be submitted to Cigarette Holder Contest Editor, Care Modern Mechanix and Inventions, 529 South 7th St., Minneapolis, Minn., must be sent postpaid to this office postmarked not later than December 1st, 1933.

Judging of the entries will begin on that day, and the awards will be made as soon thereafter as possible. Actual cigarette holders must be submitted so that we may dis- sect the prize-winners and make photographs from which an article may be illustrated. Do not send plans or drawings. No models will be returned. The decision of the judges will be considered final, and in event of a tie, duplicate prizes will be awarded. Employees of this publication and their families, of course, are not eligible to compete.

That’s all there is to it! No strings, no muss or fuss or red tape! Somebody is going to have $75 first prize money for merely going to the workbench and concocting the most novel, rational and practical cigarette holder he can imagine. Twelve other entrants will share in the prize money —so there is ample chance for you to win.

As a hint to the type of thing that will stand the best chance of winning, bear in mind that the judges will consider the entries on the following points, in order as named: Originality of conception, practicability (as opposed to the grotesque or distastefully bizarre), workmanship, and lastly, ease of construction.