EVERY DAY A BETTER WORLD – Through Parks, Shorts and Eugenics (Feb, 1937)

“I am all for the Bishop and the girls, provided the latter have the right figures for shorts.” 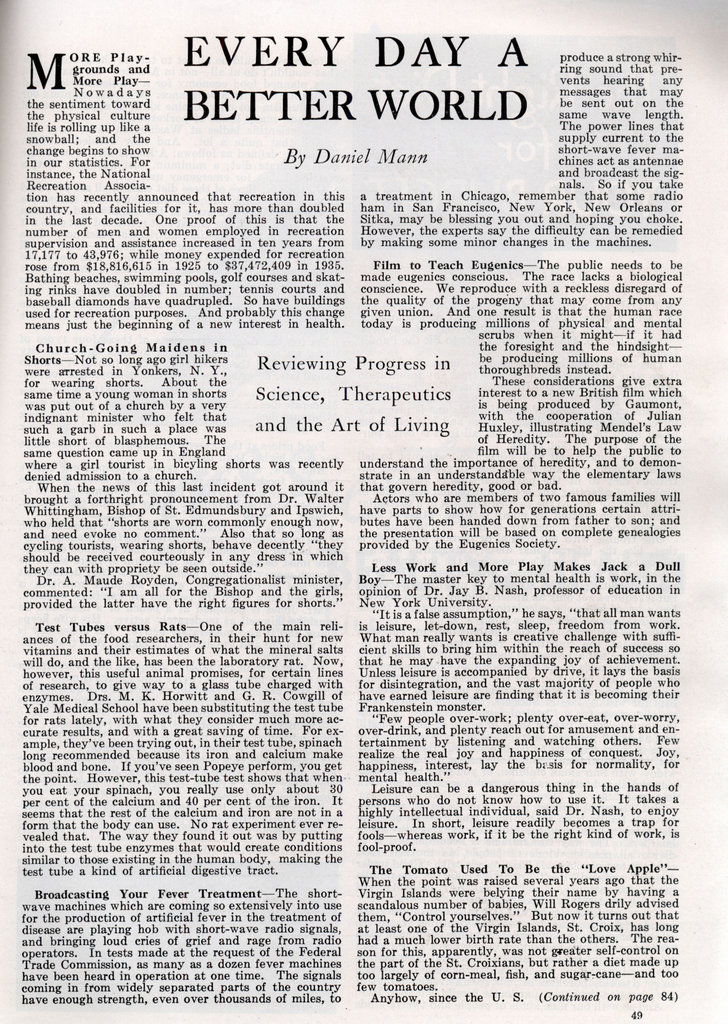 EVERY DAY A BETTER WORLD

Reviewing Progress in Science, Therapeutics and the Art of Living

Nowadays the sentiment toward the physical culture life is rolling up like a snowball; and the change begins to show in our statistics. For instance, the National Recreation Association has recently announced that recreation in this country, and facilities for it, has more than doubled in the last decade. One proof of this is that the number of men and women employed in recreation supervision and assistance increased in ten years from 17,177 to 43,976; while money expended for recreation rose from $18,816,615 in 1925 to $37,472,409 in 1935. Bathing beaches, swimming pools, golf courses and skating rinks have doubled in number; tennis courts and baseball diamonds have quadrupled. So have buildings used for recreation purposes. And probably this change means just the beginning of a new interest in health.

Not so long ago girl hikers were arrested in Yonkers, N. Y., for wearing shorts. About the same time a young woman in shorts was put out of a church by a very indignant minister who felt that such a garb in such a place was little short of blasphemous. The same question came up in England where a girl tourist in bicyling shorts was recently denied admission to a church.

When the news of this last incident got around it brought a forthright pronouncement from Dr. Walter Whittingham, Bishop of St. Edmundsbury and Ipswich, who held that “shorts are worn commonly enough now, and need evoke no comment.” Also that so long as cycling tourists, wearing shorts, behave decently “they should be received courteously in any dress in which they can with propriety be seen outside.”

Dr. A. Maude Royden, Congregationalist minister, commented: “I am all for the Bishop and the girls, provided the latter have the right figures for shorts.”

One of the main reliances of the food researchers, in their hunt for new vitamins and their estimates of what the mineral salts will do, and the like, has been the laboratory rat. Now, however, this useful animal promises, for certain lines of research, to give way to a glass tube charged with enzymes. Drs. M. K. Horwitt and G. R. Cowgill of Yale Medical School have been substituting the test tube for rats lately, with what they consider much more accurate results, and with a great saving of time. For example, they’ve been trying out, in their test tube, spinach long recommended because its iron and calcium make blood and bone. If you’ve seen Popeye perform, you get the point. However, this test-tube test shows that when you eat your spinach, you really use only about 30 per cent of the calcium and 40 per cent of the iron. It seems that the rest of the calcium and iron are not in a form that the body can use. No rat experiment ever revealed that. The way they found it out was by putting into the test tube enzymes that would create conditions similar to those existing in the human body, making the test tube a kind of artificial digestive tract.

The shortwave machines which are coming so extensively into use for the production of artificial fever in the treatment of disease are playing hob with short-wave radio signals, and bringing loud cries of grief and rage from radio operators. In tests made at the request of the Federal Trade Commission, as many as a dozen fever machines have been heard in operation at one time. The signals coming in from widely separated parts of the country have enough strength, even over thousands of miles, to produce a strong whirring sound that prevents hearing any messages that may be sent out on the same wave length. The power lines that supply current to the short-wave fever machines act as antennae and broadcast the signals. So if you take a treatment in Chicago, remember that some radio ham in San Francisco, New York, New Orleans or Sitka, may be blessing you out and hoping you choke. However, the experts say the difficulty can be remedied by making some minor changes in the machines.

The public needs to be made eugenics conscious. The race lacks a biological conscience. We reproduce with a reckless disregard of the quality of the progeny that may come from any given union. And one result is that the human race today is producing millions of physical and mental scrubs when it might—if it had the foresight and the hindsight— be producing millions of human thoroughbreds instead.

These considerations give extra interest to a new British film which is being produced by Gaumont, with the cooperation of Julian Huxley, illustrating Mendel’s Law of Heredity. The purpose of the film will be to help the public to understand the importance of heredity, and to demonstrate in an understandable way the elementary laws that govern heredity, good or bad.

Actors who are members of two famous families will have parts to show how for generations certain attributes have been handed down from father to son; and the presentation will be based on complete genealogies provided by the Eugenics Society.

The master key to mental health is work, in the opinion of Dr. Jay B. Nash, professor of education in New York University.

“It is a false assumption,” he says, “that all man wants is leisure, let-down, rest, sleep, freedom from work. What man really wants is creative challenge with sufficient skills to bring him within the reach of success so that he may have the expanding joy of achievement. Unless leisure is accompanied by drive, it lays the basis for disintegration, and the vast majority of people who have earned leisure are finding that it is becoming their Frankenstein monster.

“Few people over-work; plenty over-eat, over-worry, over-drink, and plenty reach out for amusement and entertainment by listening and watching others. Few realize the real joy and happiness of conquest. Joy, happiness, interest, lay the basis for normality, for mental health.”

Leisure can be a dangerous thing in the hands of persons who do not know how to use it. It takes a highly intellectual individual, said Dr. Nash, to enjoy leisure. In short, leisure readily becomes a trap for fools—whereas work, if it be the right kind of work, is fool-proof.

The Tomato Used To Be the “Love Apple”—

When the point was raised several years ago that the Virgin Islands were belying their name by having a scandalous number of babies, Will Rogers drily advised them, “Control yourselves.” But now it turns out that at least one of the Virgin Islands, St. Croix, has long had a much lower birth rate than the others. The reason for this, apparently, was not greater self-control on the part of the St. Croixians, but rather a diet made up too largely of corn-meal, fish, and sugar-cane—and too few tomatoes.

Government introduced the tomato plant on St. Croix a few years back, in the belief that something other than sugar-cane could be grown there, the birth rate on St. Croix has sky-rocketed spectacularly. According to the Bureau of Home Economics, the liberal amount of vitamins and mineral salts in the tomatoes which are now being ravenously eaten on St. Croix might explain the change. Being in better physical condition, the St. Croixians would naturally be more fecund. And perhaps also more romantic. Anyhow, our great-grandparents can remember the day when, in these United States of America, the tomato was known as the “love apple.” Perhaps they named it better than they knew.

“Sugar Shock” By Insulin as a Cure for Dementia Praecox —

A “sugar shock” treatment for schizophrenia (dementia praecox) has been announced in a recent issue of the Journal of the American Medical Association, “Complete recovery” is reported in 70.7 per cent of the group of 104 cases; and “good recovery” 88 per cent of the time, enabling the patients to resume their former occupations. The usual recovery rate is only about 2.5 per cent.

The new treatment consists of injections of insulin—the standard treatment for diabetes—which lowers the amount of sugar in the blood till shock is produced. Nobody knows how it works; but the treatment seems to be based on the fact that a sudden shock will often knock a mentally ill person back into sanity.

The treatment is reported in an article by Dr. Bernard Glueck, of Ossining, N. Y., who reports that he also assisted in the application of it in several successful cases in Switzerland. One patient has remained well for two years after treatment; others have remained fully recovered after one year.

Here is something that might be even more valuable as a preventive than as a cure. Maybe too such a treatment would benefit a lot of us who can’t get normal control of our unruly dispositions.

Will This Really Grow Hair?—

Dr. Andre A. Cueto, of Cincinnati, has worked out a device which is said to stimulate hair growth by applying to the scalp alternate periods of vacuum and pressure by means of a close-fitting cap attached to a suitable machine. The principle is not unlike that of the now famous Pavaex, which is used for restoring circulation of blood to the dying limbs of old persons whose blood vessel walls have become so thickened as not to admit the passage of sufficient blood to nourish the tissues.

Some time ago Dr. Cueto noticed that the use of the Pavaex machine, besides restoring circulation to the extremities in such cases, caused an increased growth of hair on the legs— presumably through the improved blood supply. So he developed a hair-growing clinic, where he has met with considerable success, especially in certain types of baldness and thinning hair. The treatment provides three cycles a minute, with the vacuum lasting about three times as long as the pressure. It is said to prevent falling hair after several hours of treatment, and to stimulate the growth of new hair in cases where the hair follicles have not been destroyed.