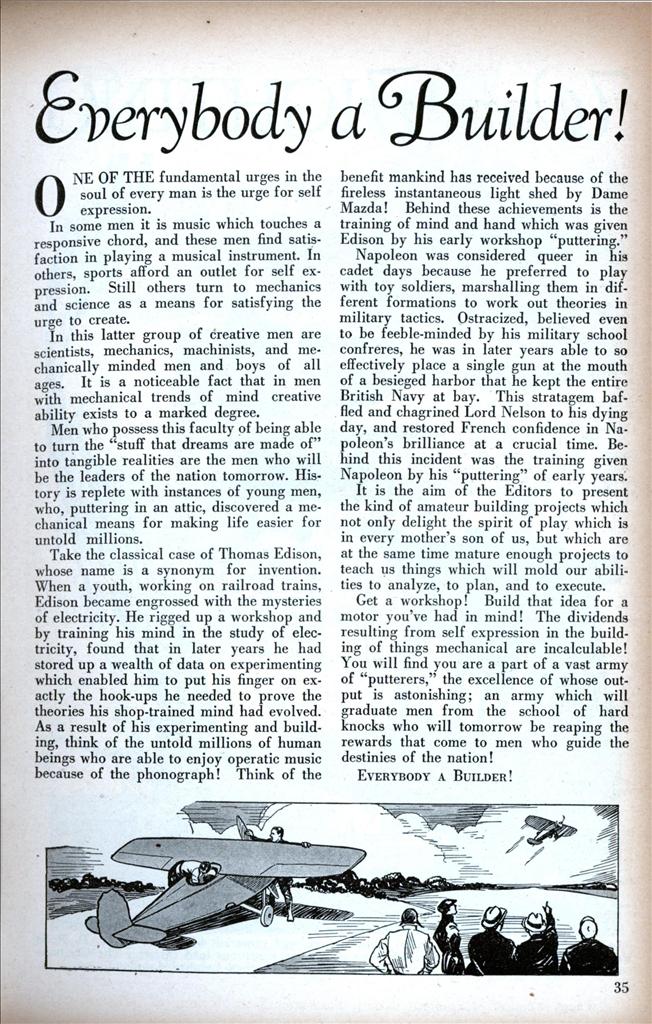 ONE OF THE fundamental urges in the soul of every man is the urge for self expression.

In some men it is music which touches a responsive chord, and these men find satisfaction in playing a musical instrument. In others, sports afford an outlet for self expression. Still others turn to mechanics and science as a means for satisfying the urge to create.

In this latter group of creative men are scientists, mechanics, machinists, and mechanically minded men and boys of all ages. It is a noticeable fact that in men with mechanical trends of mind creative ability exists to a marked degree.

Men who possess this faculty of being able to turn the “stuff that dreams are made of” into tangible realities are the men who will be the leaders of the nation tomorrow. History is replete with instances of young men, who, puttering in an attic, discovered a mechanical means for making life easier for untold millions.

Take the classical case of Thomas Edison, whose name is a synonym for invention. When a youth, working on railroad trains, Edison became engrossed with the mysteries of electricity. He rigged up a workshop and by training his mind in the study of electricity, found that in later years he had stored up a wealth of data on experimenting which enabled him to put his finger on exactly the hook-ups he needed to prove the theories his shop-trained mind had evolved. As a result of his experimenting and building, think of the untold millions of human beings who are able to enjoy operatic music because of the phonograph! Think of the benefit mankind has received because of the fireless instantaneous light shed by Dame Mazda! Behind these achievements is the training of mind and hand which was given Edison by his early workshop “puttering.”

Napoleon was considered queer in his cadet days because he preferred to play with toy soldiers, marshalling them in different formations to work out theories in military tactics. Ostracized, believed even to be feeble-minded by his military school confreres, he was in later years able to so effectively place a single gun at the mouth of a besieged harbor that he kept the entire British Navy at bay. This stratagem baffled and chagrined Lord Nelson to his dying day, and restored French confidence in Napoleon’s brilliance at a crucial time. Behind this incident was the training given Napoleon by his “puttering” of early years.

It is the aim of the Editors to present the kind of amateur building projects which not only delight the spirit of play which is in every mother’s son of us, but which are at the same time mature enough projects to teach us things which will mold our abilities to analyze, to plan, and to execute.

Get a workshop! Build that idea for a motor you’ve had in mind! The dividends resulting from self expression in the building of things mechanical are incalculable! You will find you are a part of a vast army of “putterers,” the excellence of whose output is astonishing; an army which will graduate men from the school of hard knocks who will tomorrow be reaping the rewards that come to men who guide the destinies of the nation!