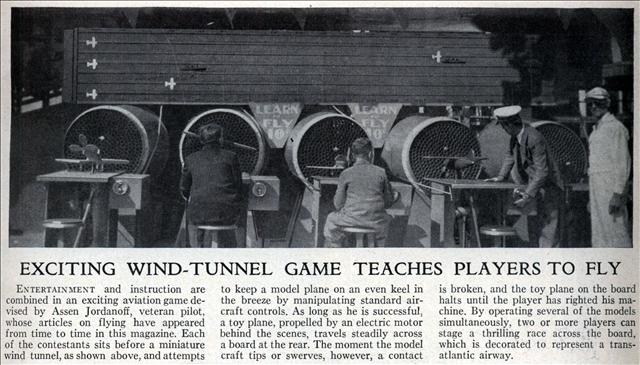 Entertainment and instruction are combined in an exciting aviation game devised by Assen Jordanoff, veteran pilot, whose articles on flying have appeared from time to time in this magazine. Each of the contestants sits before a miniature wind tunnel, as shown above, and attempts to keep a model plane on an even keel in the breeze by manipulating standard aircraft controls. As long as he is successful, a toy plane, propelled by an electric motor behind the scenes, travels steadily across a board at the rear. The moment the model craft tips or swerves, however, a contact is broken, and the toy plane on the board halts until the player has righted his machine. By operating several of the models simultaneously, two or more players can stage a thrilling race across the board, which is decorated to represent a transatlantic airway.