Popular Science
Issue: May, 1933
Posted in: DIY
9 Comments on EXPERIMENTAL Arc Furnace MELTS ANYTHING (May, 1933)

EXPERIMENTAL Arc Furnace MELTS ANYTHING (May, 1933) 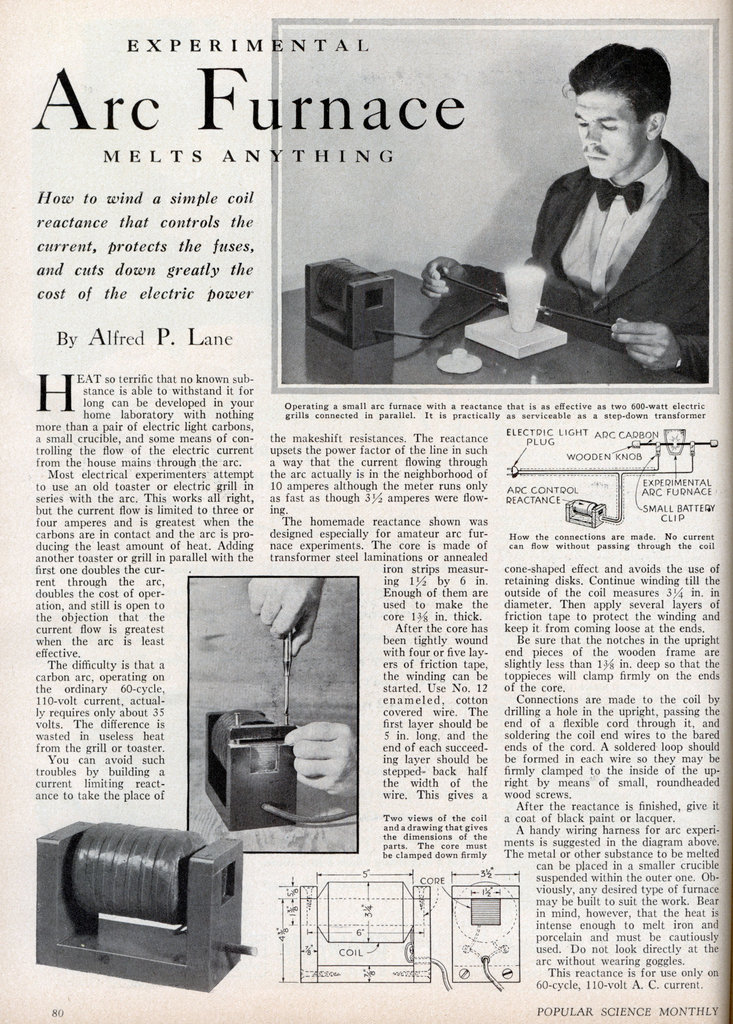 How to wind a simple coil reactance that controls the current, protects the fuses, and cuts down greatly the cost of the electric power

HEAT so terrific that no known substance is able to withstand it for long can be developed in your home laboratory with nothing more than a pair of electric light carbons, a small crucible, and some means of controlling the flow of the electric current from the house mains through the arc.

Most electrical experimenters attempt to use an old toaster or electric grill in series with the arc. This works all right, but the current flow is limited to three or four amperes and is greatest when the carbons are in contact and the arc is producing the least amount of heat. Adding another toaster or grill in parallel with the first one doubles the current through the arc, doubles the cost of operation, and still is open to the objection that the current flow is greatest when the arc is least effective.

The difficulty is that a carbon arc, operating on the ordinary 60-cycle, 110-volt current, actually requires only about 35 volts. The difference is wasted in useless heat from the grill or toaster.

You can avoid such troubles by building a current limiting reactance to take the place of the makeshift resistances. The reactance upsets the power factor of the line in such a way that the current flowing through the arc actually is in the neighborhood of 10 amperes although the meter runs only as fast as though 3-1/2 amperes were flowing.

The homemade reactance shown was designed especially for amateur arc furnace experiments. The core is made of transformer steel laminations or annealed iron strips measuring 1-1/2 by 6 in. Enough of them are used to make the core 1-3/8 in. thick.

After the core has been tightly wound with four or five layers of friction tape, the winding can be started. Use No. 12 enameled, cotton covered wire. The first layer should be 5 in. long, and the end of each succeeding layer should be stepped- back half the width of the wire. This gives a cone-shaped effect and avoids the use of retaining disks. Continue winding till the outside of the coil measures 3-1/4- in diameter. Then apply several layers of friction tape to protect the winding and keep it from coming loose at the ends.

Be sure that the notches in the upright end pieces of the wooden frame are slightly less than 1-3/8 in. deep so that the toppieces will clamp firmly on the ends of the core.

Connections are made to the coil by drilling a hole in the upright, passing the end of a flexible cord through it, and soldering the coil end wires to the bared ends of the cord. A soldered loop should be formed in each wire so they may be firmly clamped to the inside of the upright by means of small, roundheaded wood screws.

After the reactance is finished, give it a coat of black paint or lacquer.

A handy wiring harness for arc experiments is suggested in the diagram above. The metal or other substance to be melted can be placed in a smaller crucible suspended within the outer one. Obviously, any desired type of furnace may be built to suit the work. Bear in mind, however, that the heat is intense enough to melt iron and porcelain and must be cautiously used. Do not look directly at the arc without wearing goggles.