Modern Mechanix
Issue: Nov, 1936
Posted in: Chemistry, DIY
No Comments on Experiments With Oxygen FOR THE AMATEUR CHEMIST (Nov, 1936)

Experiments With Oxygen FOR THE AMATEUR CHEMIST (Nov, 1936) 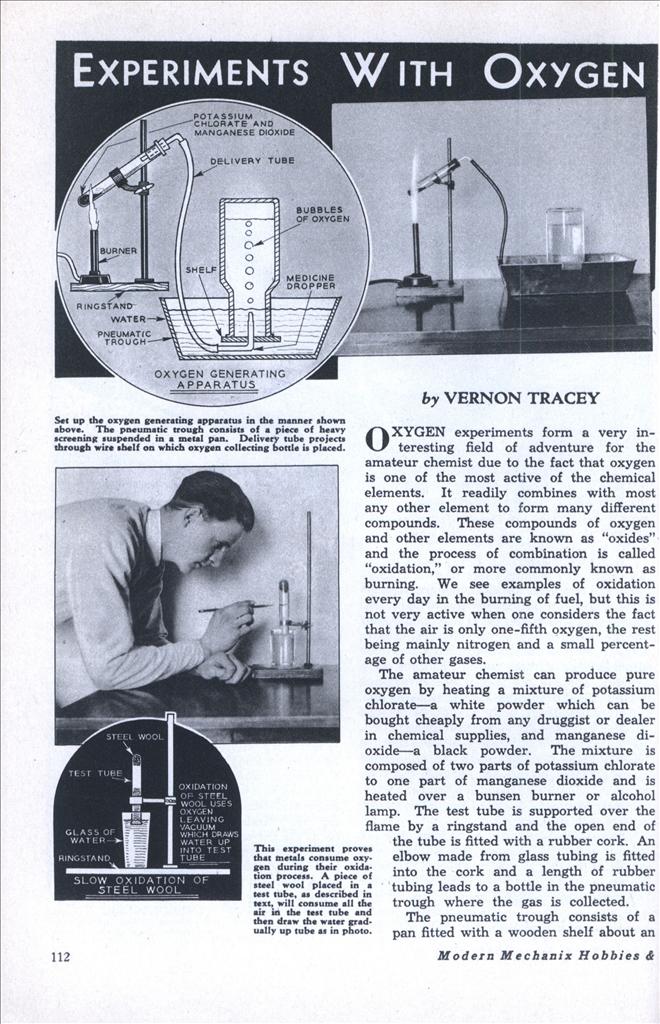 Experiments With Oxygen FOR THE AMATEUR CHEMIST

A few common chemicals supplied by the druggist and simple apparatus is all that is required to produce these interesting experiments with oxygen.

OXYGEN experiments form a very interesting field of adventure for the amateur chemist due to the fact that oxygen is one of the most active of the chemical elements. It readily combines with most any other element to form many different compounds. These compounds of oxygen and other elements are known as “oxides” and the process of combination is called “oxidation,” or more commonly known as burning. We see examples of oxidation every day in the burning of fuel, but this is not very active when one considers the fact that the air is only one-fifth oxygen, the rest being mainly nitrogen and a small percentage of other gases.

The amateur chemist can produce pure oxygen by heating a mixture of potassium chlorateâ€”a white powder which can be bought cheaply from any druggist or dealer in chemical supplies, and manganese dioxideâ€”a black powder. The mixture is composed of two parts of potassium chlorate to one part of manganese dioxide and is heated over a bunsen burner or alcohol lamp. The test tube is supported over the flame by a ringstand and the open end of the tube is fitted with a rubber cork. An elbow made from glass tubing is fitted into the cork and a length of rubber tubing leads to a bottle in the pneumatic trough where the gas is collected.

The pneumatic trough consists of a pan fitted with a wooden shelf about an inch from the bottom. The trough is filled with water high enough to come about an inch above the shelf. The shelf has a small hole drilled through it and a medicine dropper or piece of glass tubing drawn to a point and bent to a right angle is fitted into the end of the delivery tube and leads up through the hole in the shelf.

To collect the gas, fill a bottle with water, cover its mouth with a piece of glass, invert it in the pneumatic trough and remove the glass again. The mixture is heated in the test tube and after allowing the gas to bubble up for a few seconds, invert the bottle of water on the shelf over the end of the delivery tube. The gas will bubble up into the bottle and displace the water. After the bottle is full, cover its mouth with a piece of glass and remove it from the shelf. It can be set out on the table if the glass is left over its mouth to prevent the gas from escaping.

Eight grams of the chlorate mixture will make several large bottles of oxygen. After the gas ceases to flow, remove the test tube and allow it to cool, otherwise water will be drawn back through the delivery tube and break the glass. The contents of the test tube â€”fused potassium chloride and manganese dioxide can be removed by dissolving in water.

In removing the oxygen the potassium chlorate is reduced to potassium chloride but the manganese dioxide which is used as a “catalytic agent” to speed up the reaction undergoes no change itself. If so desired it can be filtered out and used again. A sheet of blotting paper fitted into a funnel will serve as a filter.

Steel wool will flare up and burn with a brilliant light if held in a bottle of oxygen as can be seen in the photo. A wad of it is held with forceps over a bunsen flame until it begins to glow, the cover is removed from the oxygen and the wool is thrust into the bottle where it immediately bursts into flame. Bits of molten steel will fall and spatter on the bottom of the bottle creating the effect of fireworks and care should be taken not to get the face too near the mouth of the bottle. Iron oxide will be deposited on the bottom of the bottle at the end of this experiment.

Oxygen will combine with steel wool however at ordinary temperatures, although much more slowly. To demonstrate this, force a wad of steel wool into a test tube, fill it with water and collect it full of oxygen in the manner just described. Support it over a glass of water on a ringstand so the mouth of the test tube is submerged to a depth of about an inch. Allow it to set all night and upon examination the next day the water will be found to have risen up to a considerable height in the test tube. The steel wool has rusted and is covered with a coat of iron oxide. This shows that the oxygen has combined with the steel wool and left a partial vacuum in the test tube which in turn draws the water up from the glass.

We see examples of iron oxidizing at ordinary temperatures every day but this takes place more slowly than the steel wool did in the pure oxygen. There is just as much heat produced at the end of this slow oxidation as when the wool was burned in the bottle of oxygen; but so slowly that it is dissipated as fast as it is produced.

If, however, this heat given off by slow oxidation cannot escape as fast as it is produced as in the case of a mow of damp hay or a pile of oily rags the heat keeps accumulating until the kindling temperature is reached and the material bursts into flame. This is known as “spontaneous combustion” and is a common cause of fire in farm buildings.

You have no doubt heard the joke about making the match burn twiceâ€”well, here’s how to do it: Light a match and allow it to burn for a few seconds. Blow out the flame and if a glowing ember remains on the end, thrust the match into a bottle of oxygen and it will immediately burst into flame again with a slight harmless explosion. This action can be repeated several times until the oxygen becomes used up.

A glowing charcoal dropped into a bottle of oxygen will burn vigorously. Cover the bottle with a glass while the charcoal is burning to collect the carbon dioxide formed. After the burning has ceased, pour about an ounce of lime-water into the bottle and shake. The lime-water will turn milky; this indicates the presence of carbon dioxide.

Similarly if sulphur is burned in oxygen, weak sulphurous acid will be formed. Test with blue litmus paper which turns red on contact with acid.

Chemists who have no gas supply or who wish to heat large flasks will find a one burner electric stove very convenient. Flasks should be supported an inch or so above the heating element by means of a ringstand as shown in the photo. There is little danger of breaking the glass as long as it does not come in direct contact with the red-hot wires.

Ordinary drinking glasses will be found very suitable for collecting small quantities of oxygen. They are easier to handle than test tubes and hold enough oxygen for ordinary tests. In collecting gases in this manner, slide a piece of glass over the mouth of the vessel before withdrawing it from the water to prevent the gas from escaping, as shown in the photo.

Whether he has much knowledge of chemistry or not, the amateur chemist should be interested in the practical use of this gas.