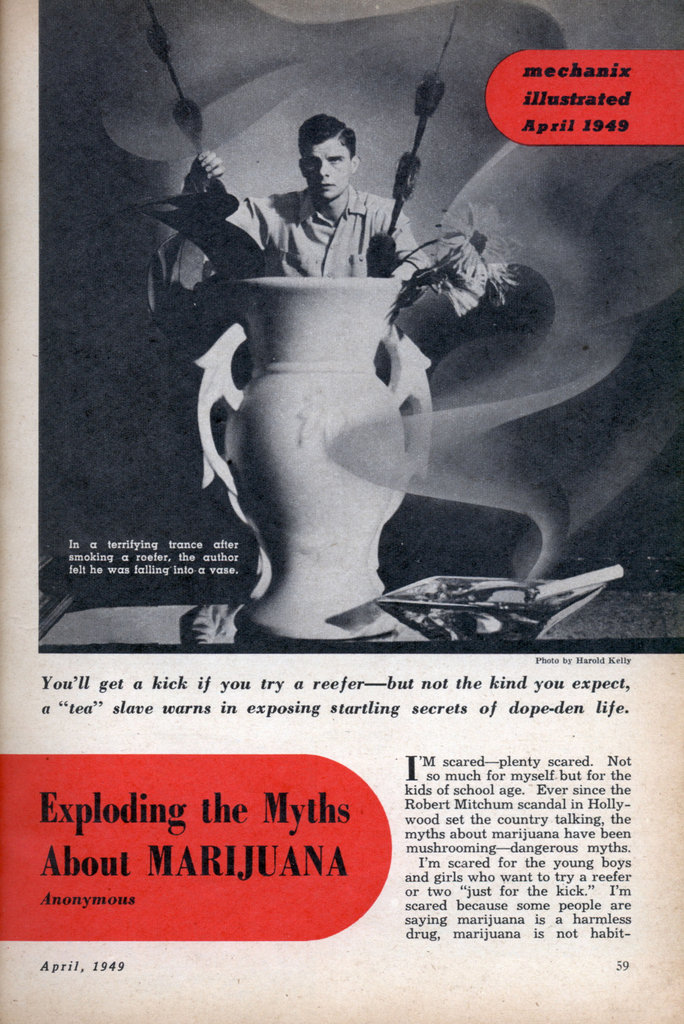 I knowâ€”I smoke marijuana. I’ve been a slave to reefers ever since I was 16. Twenty-one years of marijuana “muggling” has taken a heavy toll on my health and shattered my nerves. I find release from my mental anguish only when I lose myself in a reefer trance.

I fell victim to marijuana while I was going to school in a tough New York neighborhood. One day when a group of us kids was hanging around near the candy store a smooth-talking stranger urged us to try one of his special “muggles.”

That dope salesman kept after us. Soon he had us as regular customersâ€”and marijuana had another batch of young slaves.

Now my companions are no longer young in health or heart but we must keep seeking solace in dope dens until we’re finally trappedâ€”and thrown into jail or the madhouse.

To show you the life I’ve had to lead as a reefer addict, I’m going to take you behind the scenes into one of the marijuana dens I frequent. …

Five of us marijuana smokers are sitting in easy chairs in a small room. There are heavy draperies on the walls and the windows are tightly closed. The odor of Chinese incense is strongâ€”to heighten the exotic effect. The only light is a dim one in the corner. Glare disturbs us when we’re high.

This is a “tea pad,” a private apartment where we smokers meet several times a week to “get loaded.”

My lips hold the cigaret loosely, leaving space to draw in as much air as possible with the smoke. You get higher quicker when smoke and air mix in your lungs.

This first puff is always bitter, like stale tobacco. There is a pungent odor, as of strong teaâ€”hence the nickname. I want to retch, but I keep the smoke in my lungs as long as possible. Then I exhale slowly. It takes 20 minutes to finish the first stick.

I start to feel it. A soft languor envelops me. I’m beginning to float. My troubles are left behind as I rise from my easy chair beyond their clutch.

I smoke a second reefer. Now I get a feeling of supreme strength- I can do anything. But, strangely, I’m content just to float above my chair. Now I feel good. My joy is delirious.

I start giggling. I laugh loudly when a companion merely asks me for a match. It’s sillyâ€”but I can’t help it. The world is swirling with lights and fun.

Now a third smoke … a fourth. This time my hands feel huge, my feet miles away. I’m afraid to step out of the chair. A small downward step is like a deep plunge into a dark abyss.

That’s the danger point. I wish I could stop smoking, but I can’t. Suddenly I feel I’m soaring around the room. I spot a small vase and plunge into it. I swim around. Then I’m choking and frantically fight my way up for air. Finally I crawl out, gasping.

A portrait on the wall comes to life, the girl in the picture stretches out her hands, grasps my throat. I scream. …

At this point a smoker who has a minor neurosisâ€”and who hasn’tâ€”can be shocked into insanity by a terrifying hallucination. So far, I’ve escaped, but I live in fear of weird, mind-shattering delusions.

The morning after, my throat is parched. A dull ache throbs in my head, just behind the eyes. I am ravenously hungry. The headache and dry lips persist until nightfall. I feel I must crawl back to a dope den to escape the grim agony in my mind.

Some young people try marijuana as a love-making stimulant. They have been told that one moment of romantic passion seems to linger for hours under the influence of marijuana. This type of time distortion, I have learned, rarely happens. Most addicts find reefers a sexual depressant rather than a stimulant.

A word about the cigarets themselves. Marijuana is the Indian name for common hemp, an annual plant which grows from six to 15 feet high, in almost any kind of soil. Its legitimate use is in the manufacture of rope. Frequently, it grows wild in empty lots, along railroad sidings, in back yards. It’s even been cultivated in window boxes.

Four years ago a group of scientists, appointed by the late Mayor Fiorello La-Guardia, explored the marijuana problem in New York City and published their findings. They gave the stuff in measured doses to 70 prisoners in one of the local jails and watched their reactions. Here’s what they decided:

“Marijuana is not habit-forming. … It has very little to do with the commission of major crimes. … It does not lead to juvenile delinquency. . . ”

The report pointed out that the 70 prisoners appeared lazy throughout their bout with the drug. They showed no desire for action and never got into fights with one another.

The report added that no cases of mental weakness resulted from the use of marijuana. Bosh! The men simply didn’t smoke enough to reach a crisis. Some of the deadliest myths about this evil drug may be traced back to this extremely limited and inconclusive prison study.

Listen to what the powerful American Medical Association has to say about that report:

“. . . The report draws sweepingly inadequate conclusions which minimize the harmfulness of marijuana.”

The A. M. A. cites a report by six noted physicians who made a similar study and found a direct link between crime and marijuana. These doctors point to the case of a 16-year-old boy who began smoking after he read the LaGuardia Commission report. In a short time the lad’s mind began failing him.

Dr. Walter Bromberg, physician in charge of the psychiatric clinic in the New York City General Sessions Court, also helps explode that myth about marijuana having no effect on the mind:

“Thirty-two cases of mental disease are traceable directly to marijuana.”

Every law-enforcement official in the country, including district attorneys and Federal narcotics agents, right down to local police officers, has insisted that there is a definite link to crime. They say reefer peddlers operate where school children gather. They make countless arrests each year, for crimes’ ranging from pickpocketing to murder, and the police record always states that the criminals were under the influence of marijuana.

“There can be no compromise with those who are enslaving our youngsters to a habit which results in swift deterioration of mind and morals and that has been exacting daily toll in murders, thefts and excesses of all kinds”

Take it from one who fell for a myth about marijuana. Try smoking a reefer for the kick. You’ll really get that kickâ€”right into the gutter!