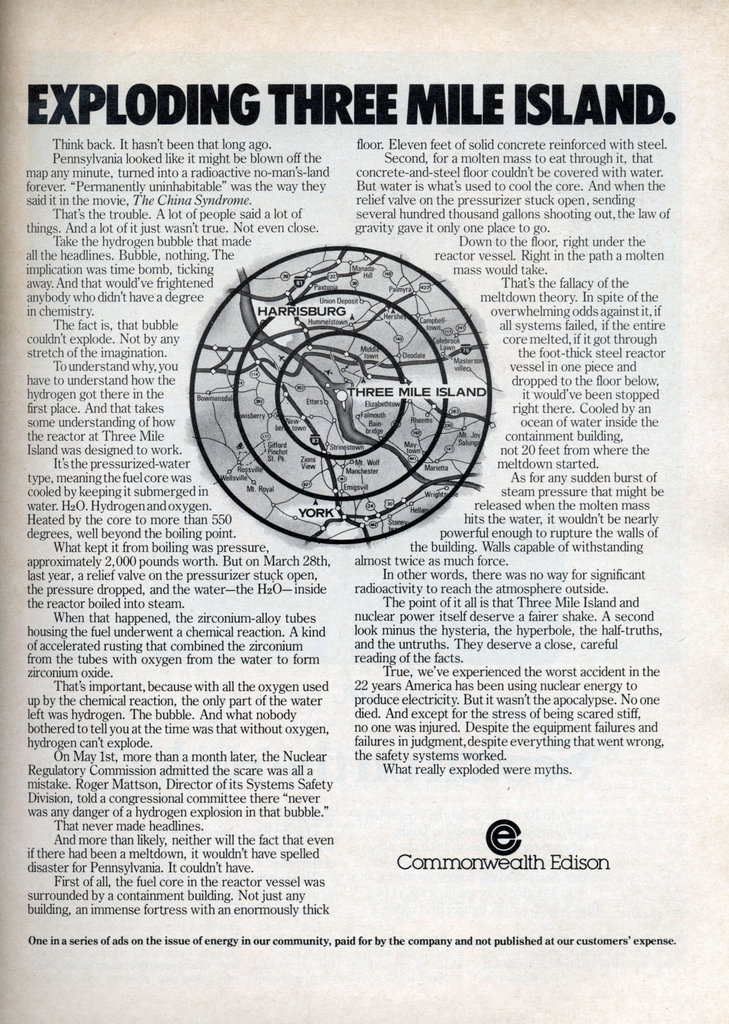 Think back. It hasn’t been that long ago. Pennsylvania looked like it might be blown off the map any minute, turned into a radioactive no-man’s-land forever. “Permanently uninhabitable” was the way they said it in the movie, The China Syndrome.

That’s the trouble. A lot of people said a lot of things. And a lot of it just wasn’t true. Not even close.

Take the hydrogen bubble that made all the headlines. Bubble, nothing. The implication was time bomb, ticking away. And that would’ve frightened anybody who didn’t have a degree in chemistry.

The fact is, that bubble couldn’t explode. Not by any stretch of the imagination.

To understand why, you have to understand how the hydrogen got there in the first place. And that takes some understanding of how the reactor at Three Mile Island was designed to work.

It’s the pressurized-water type, meaning the fuel core was cooled by keeping it submerged in water. H2O. Hydrogen and oxygen.

Heated by the core to more than 550 degrees, well beyond the boiling point.

What kept it from boiling was pressure, approximately 2,000 pounds worth. But on March 28th, last year, a relief valve on the pressurizer stuck open, the pressure dropped, and the water—the H2O— inside the reactor boiled into steam.

When that happened, the zirconium-alloy tubes housing the fuel underwent a chemical reaction. A kind of accelerated rusting that combined the zirconium from the tubes with oxygen from the water to form zirconium oxide.

That’s important, because with all the oxygen used up by the chemical reaction, the only part of the water left was hydrogen. The bubble. And what nobody bothered to tell you at the time was that without oxygen, hydrogen can’t explode.

On May 1st, more than a month later, the Nuclear Regulatory Commission admitted the scare was all a mistake. Roger Mattson, Director of its Systems Safety Division, told a congressional committee there “never was any danger of a hydrogen explosion in that bubble.”

That never made headlines.

And more than likely, neither will the fact that even if there had been a meltdown, it wouldn’t have spelled disaster for Pennsylvania. It couldn’t have.

First of all, the fuel core in the reactor vessel was surrounded by a containment building. Not just any building, an immense fortress with an enormously thick floor. Eleven feet of solid concrete reinforced with steel.

Second, for a molten mass to eat through it, that concrete-and-steel floor couldn’t be covered with water. But water is what’s used to cool the core. And when the relief valve on the pressurizer stuck open, sending several hundred thousand gallons shooting out, the law of gravity gave it only one place to go.

Down to the floor, right under the reactor vessel. Right in the path a molten mass would take.

That’s the fallacy of the meltdown theory. In spite of the overwhelming odds against it, if all systems failed, if the entire J core melted, if it got through the foot-thick steel reactor vessel in one piece and dropped to the floor below, it would’ve been stopped right there. Cooled by an ocean of water inside the containment building, not 20 feet from where the meltdown started.

As for any sudden burst of steam pressure that might be released when the molten mass hits the water, it wouldn’t be nearly powerful enough to rupture the walls of the building. Walls capable of withstanding almost twice as much force.

In other words, there was no way for significant radioactivity to reach the atmosphere outside.

The point of it all is that Three Mile Island and nuclear power itself deserve a fairer shake. A second look minus the hysteria, the hyperbole, the half-truths, and the untruths. They deserve a close, careful reading of the facts.

True, we’ve experienced the worst accident in the 22 years America has been using nuclear energy to produce electricity. But it wasn’t the apocalypse. No one died. And except for the stress of being scared stiff, no one was injured. Despite the equipment failures and failures in judgment, despite everything that went wrong, the safety systems worked.

What really exploded were myths.

One in a series of ads on the issue of energy in our community, paid for by the company and not published at our customers’ expense.