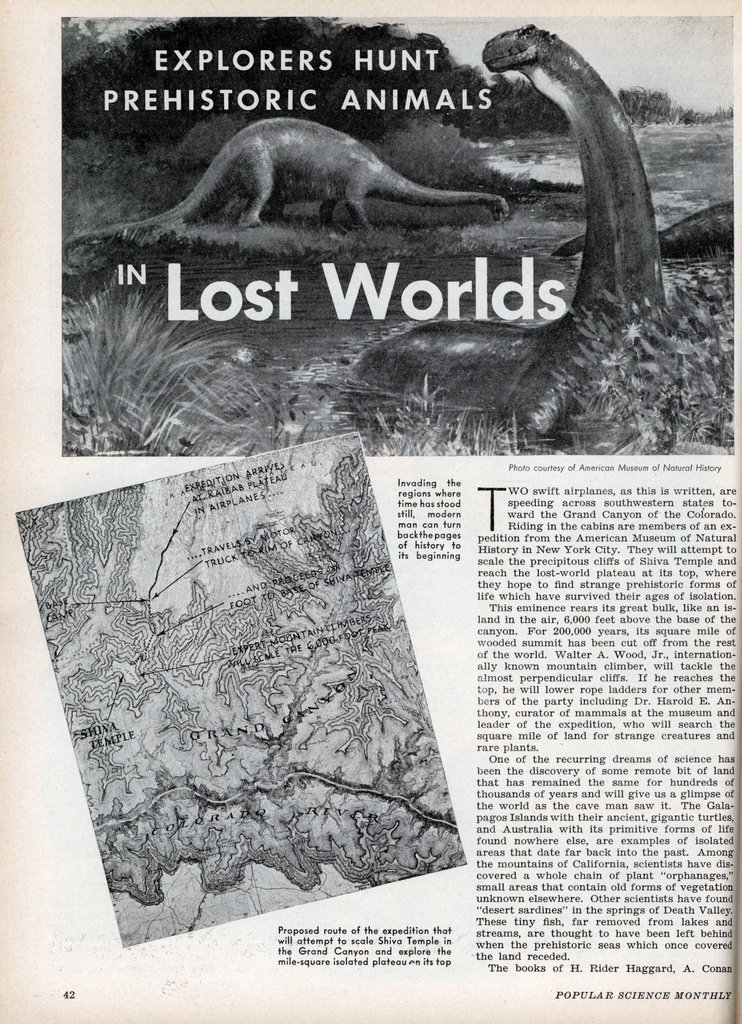 In remote corners of the earth, cut off from the rest of the world for countless centuries, scientists are discovering strange creatures that survived from the days of the cave men

TWO swift airplanes, as this is written, are speeding across southwestern states toward the Grand Canyon of the Colorado. Riding in the cabins are members of an expedition from the American Museum of Natural History in New York City. They will attempt to scale the precipitous cliffs of Shiva Temple and reach the lost-world plateau at its top, where they hope to find strange prehistoric forms of life which have survived their ages of isolation.

This eminence rears its great bulk, like an island in the air, 6,000 feet above the base of the canyon. For 200,000 years, its square mile of wooded summit has been cut off from the rest of the world. Walter A. Wood, Jr., internationally known mountain climber, will tackle the almost perpendicular cliffs. If he reaches the top, he will lower rope ladders for other members of the party including Dr. Harold E. Anthony, curator of mammals at the museum and leader of the expedition, who will search the , square mile of land for strange creatures and rare plants. One of the recurring dreams of science has been the discovery of some remote bit of land that has remained the same for hundreds of thousands of years and will give us a glimpse of the world as the cave man saw it. The Galapagos Islands with their ancient, gigantic turtles, and Australia with its primitive forms of life found nowhere else, are examples of isolated areas that date far back into the past. Among the mountains of California, scientists have discovered a whole chain of plant “orphanages,” ! small areas that contain old forms of vegetation unknown elsewhere. Other scientists have found “desert sardines” in the springs of Death Valley. These tiny fish, far removed from lakes and streams, are thought to have been left behind when the prehistoric seas which once covered the land receded.

In central Africa, natives tell of the Chepekwe and the Nandi bear. The former is said to be a gigantic creature with the head and tail of a lizard which inhabits the Dilolo Swamp and is able to crunch the massive bones of a hippopotamus as though they were twigs. Some years ago, a big-game hunter investigated reports that a huge, mysterious animal was making raids on a native village. He smoothed a strip of sand between the jungle and the camp. The next morning, he discovered tracks, four times the size of a human footprint, showing the marks of three clawed toes. The natives declared the marauder was the Nandi bear.

While scientists usually dismiss such stories as products of the imagination of superstitious natives and excited hunters, they admit that, even today, there are vast stretches of relatively unknown country in which there may exist creatures of the past and weird animals new to science.

At the far tip of South America, in Patagonia, a traveler once discovered the remains of a giant ground sloth such as inhabited the earth in prehistoric times. So well preserved was it that Sir Edwin Ray Lankester, noted natural-history expert of the British Museum, declared that it must have been alive at a comparatively recent date. In the unmapped stretches of Patagonia, he suggested, such giants of the ancient past may still be living.

In 1912, the tales of Malay pearl divers led to the discovery of descendants of dinosaurs living on the far-away isle of Komodo. Expeditions visited this cobra-infested dot of land between Java and Timor and found twelve-foot dragon lizards, great carnivorous reptiles with scaly armor and forked yellow tongues. Both pictures and living specimens have been brought back to England and America.

On the same part of the globe where these lost-world lizards were found, another mystery creature has been discovered. This is the scaled rhinoceros, living nowhere else in the world except in the fever-ridden jungles of Java. Twice, big-game hunters have killed the rare animals. But, so far, no living specimen has been captured.

Anthropologists, whose field of study includes vanished races of man, have added their contributions to the list of lost-world discoveries. Easter Island, in the Pacific, with its mysterious and ancient stone monuments; the isolated civilization of the Mayans; and the remains of age-old races in the arctic are some of the detached fields they have investigated where the past has carried over into the present.

During the early years of the twentieth century, arctic explorers brought back stories of a race of blond Eskimos that lived on the cold and lonely shores of Coronation Gulf, between Alaska and Hudson Bay. Expeditions investigated the report and found not only the light-skinned Eskimos—wearing curious swallowtail coats of fur, the tails of which they folded up to form mats when they sat down—but also the ruins of singular oval houses of stone. The blond Eskimos knew nothing of the builders of these stone-age homes. They are believed to have been an earlier people carried from Asia across the far stretches of the north by some prehistoric tide of immigration. As it receded, it left behind isolated colonies, just as pools are left by the ebbing tide of the ocean.

When A. Conan Doyle wrote his imaginative story, “The Lost World,” he laid the action on the rocky, mist-enshroud-ed summit of Mount Roraima, a peak that straddles the boundary between Brazil and Paraguay, in South America. A few years ago, scientists from the American Museum of Natural History set out to scale this jungle peak. In an Odyssey of exploration they crept for days up slanting ledges of rock, losing their way in the interminable mist of the mountain top and having their shoes cut into ribbons by the grinding sandstone. After reaching the top, they spent weeks studying the creatures that live on the twenty-five square miles of the summit. When they returned to civilization, they brought varieties of bird and animal life hitherto unknown to science.

Expeditions such as this, and the one now flying westward to scale Shiva Temple in the Grand Canyon, comprise a doubly dramatic form of exploration. The scientists do more than penetrate hitherto unknown areas. They penetrate the world of the remote past as well. By discovering ancient forms of life, they seek to turn back the pages of history millions of years, enabling us to visualize more clearly the lost world of prehistoric times.