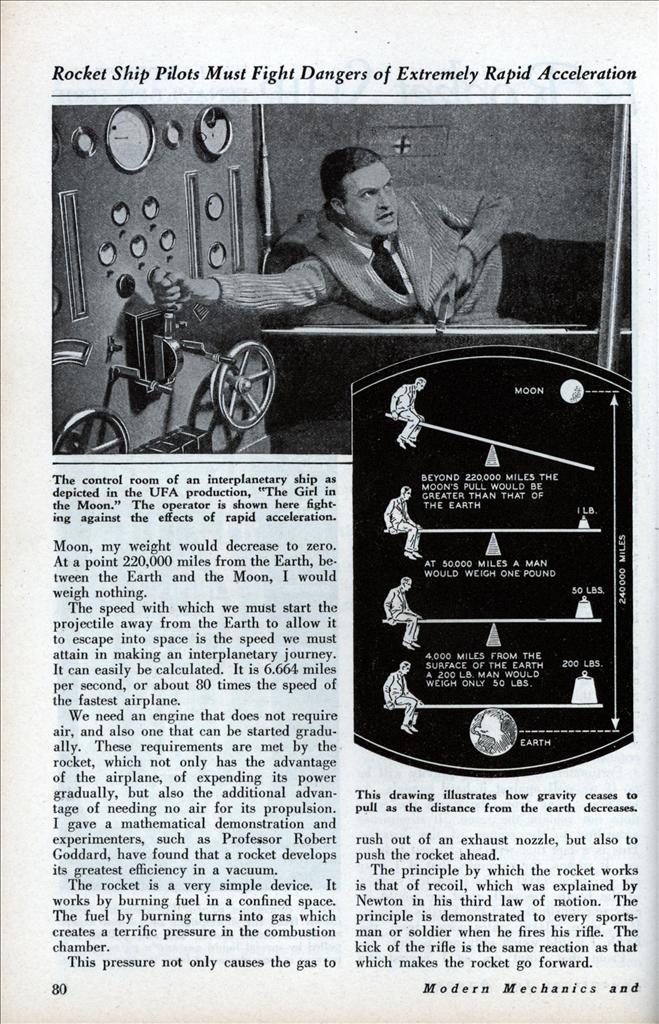 Then he plans to construct mail rockets for European and later trans-Atlantic service. These mail rockets at first will not carry passengers but this will come when the pilotless ships have attained perfection. From the experience thus gained he believes that a successful interplanetary rocket can be constructed. He explains his problems and how he hopes to overcome them, in this article.

THE first question that comes to mind is—what is the interplanetary problem?

I think we can understand the answer to this question best when we picture our position in the universe. We live upon a little speck of dust called the Earth. About 92,000,000 miles away is the Sun that warms us and keeps us alive. The Earth continually moves around the Sun in an orbit that takes 365 days to complete. Moving with it, in other orbits, are the other planets, Mercury, Venus, Mars, et cetera.

The Earth, in addition to being a satellite of the Sun, has a satellite of its own, the Moon, which circles about us continually at a distance of about 240,000 miles, completing its revolution every 28 days. It is this Moon that is to be the outer terminus of the first interplanetary journey.

There is a property possessed in common by all these bits of dust, and that is gravitation. The planets are held in their orbits around the Sun, the Moon is held in its path, and even more important to us at this moment, we are held close to the Earth by this force.

In order to escape from the Earth to reach the Moon we must be able to oppose that force of gravity and lift ourselves against it for the distance of 240,000 miles. Surely this is a gigantic task. For consider —the airplane has been able to climb only eight miles above the surface of the Earth. The balloon, without passengers, has reached an altitude of only 22 miles.

Fortunately this force of gravity will let go if we pull against it hard enough. As we draw away from the Earth the force does not remain the same. It diminishes according to the square of the distance. This is a fact that will be of great help to us. It means, for example, that if I were out in space 4,000 miles from the surface of the Earth, the pull upon me would be only one-fourth that of the Earth’s surface. If I were 50,000 miles away from the Earth, I would weigh only one pound.

From that point on, as I neared the Moon, my weight would decrease to zero. At a point 220,000 miles from the Earth, between the Earth and the Moon, I would weigh nothing.

The speed with which we must start the projectile away from the Earth to allow it to escape into space is the speed we must attain in making an interplanetary journey. It can easily be calculated. It is 6.664 miles per second, or about 80 times the speed of the fastest airplane.

We need an engine that does not require air, and also one that can be started gradually. These requirements are met by the rocket, which not only has the advantage of the airplane, of expending its power gradually, but also the additional advantage of needing no air for its propulsion. I gave a mathematical demonstration and experimenters, such as Professor Robert Goddard, have found that a rocket develops its greatest efficiency in a vacuum.

The rocket is a very simple device. It works by burning fuel in a confined space. The fuel by burning turns into gas which creates a terrific pressure in the combustion chamber.

This pressure not only causes the gas to rush out of an exhaust nozzle, but also to push the rocket ahead.

The principle by which the rocket works is that of recoil, which was explained by Newton in his third law of motion. The principle is demonstrated to every sportsman or soldier when he fires his rifle. The kick of the rifle is the same reaction as that which makes the rocket go forward.

The rocket we will use will be a very complicated and a refined piece of apparatus. Instead of ordinary black powder, we will use a fuel perhaps a hundred times more powerful. We will have to find ways of burning this fuel quickly, of controlling it, of steering the rocket. We must take this device which is perhaps thousands of years old and make it over into an engine which will perform the greatest task we have ever asked of anything.

Our first problem is to find a fuel, more powerful than any ever before used. We must have a fuel that is dependable, so that we can tell exactly what it will do under any circumstances. Our next problem is how to design the rocket so that we can get the most out of the fuel. Perhaps when we come to shoot the rocket finally at the Moon, it will not be a single rocket, but two or three, joined end to end, and arranged so that as each rocket burns out, it will drop off, finally leaving only the tip, with its passengers, to go on and complete the journey.

This is only a part of the mechanism we must provide to make the space flight possible. We must make provision on the ship for supplying our air to breathe, our heat, our food, and other necessities. We must have instruments for navigation. We must also have instruments which tell us with accuracy our speed, for while we must acquire a velocity of 24.000 miles an hour to keep from falling back to earth, we must not exceed that speed. If we do we are likely to go shooting off into space and never come back.

Therefore the problem of building a space ship means not only finding adequate fuel, but also controlling those fuels, finding light but sufficiently strong materials from which to construct the ship, making instruments, and providing conditions that make life possible for crew and passengers.

The serious scientist, who realizes and understands these difficulties, each one being a great job in itself, will not predict how soon all of them will be solved. I am certain, however, that there is no obstacle in the way of an interplanetary flight—unless perhaps a voyage to one of the distant planets—that cannot be overcome by an application of scientific principles which we now know.

Experiments on rockets are very costly. The work requires precision, not only in making and handling fuels, but in building the rocket itself. I do not claim to be able to build a ship that can travel to the Moon tomorrow or ten years from now. There are too many things which must be done first to allow any predictions.

I have now gone far enough to know that with $40,000 with which to carry to completion experiments on fuel that I have in mind, I can within two years build a rocket to travel upward 200 miles. Such a rocket would carry instruments to gather information of great value to science. It would also serve to give me further data on its operating possibilities, and I would discover what could be done to extend its range and efficiency.

Finally at the end of five years of labor, I believe that at a cost of $1,000,000 a rocket could be built to travel between Paris and New York in half an hour.

This rocket, carrying mail at first, and later passengers, would leave its terminal, rise into the upper strata of the air, up to 800 miles above the Earth, and crossing the Atlantic in a great elliptical flight, descend in a long, gentle glide to its destination. At such heights great speeds of 7,000 to 8,000 miles an hour, necessary to this flight, would be possible because there would be no resistance from the air.

All that I can say is that as a result of 25 years of study of this problem, I believe it could be done.

As for the next step, the building of a space ship—naturally an estimate of that would be even more inaccurate. For, as I have just shown, as we go en the problems become more exacting and more difficult.

The contingencies that must be provided for are enormous. Only after we have mastered the difficulties of building rockets capable of traveling from point to point on the Earth can we begin to undertake a rocket for the greater distances. Nevertheless, I have full faith that a Moon rocket can and will be built.