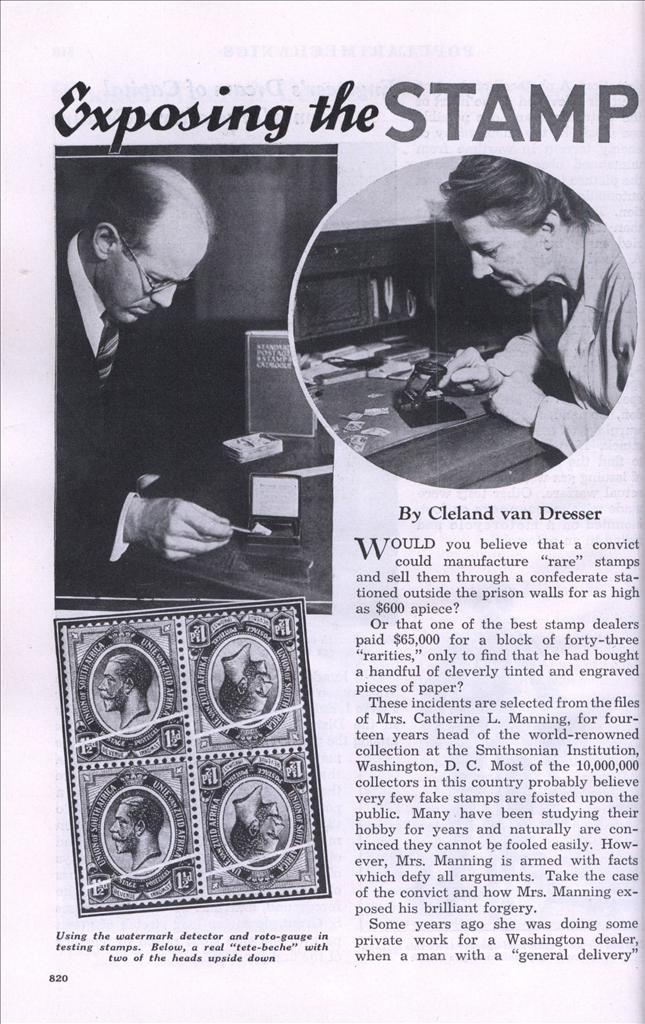 WOULD you believe that a convict could manufacture “rare” stamps and sell them through a confederate stationed outside the prison walls for as high as $600 apiece?

Or that one of the best stamp dealers paid $65,000 for a block of forty-three “rarities,” only to find that he had bought a handful of cleverly tinted and engraved pieces of paper?

These incidents are selected from the files of Mrs. Catherine L. Manning, for fourteen years head of the world-renowned collection at the Smithsonian Institution, Washington, D. C. Most of the 10,000,000 collectors in this country probably believe very few fake stamps are foisted upon the public. Many have been studying their hobby for years and naturally are convinced they cannot be fooled easily. However, Mrs. Manning is armed with facts which defy all arguments. Take the case of the convict and how Mrs. Manning exposed his brilliant forgery.

Some years ago she was doing some private work for a Washington dealer, when a man with a “general delivery”

address at Leavenworth, Kas., wrote for a common type of one cent, 1851, a blue Franklin known as “type 4, imperforated.” Nothing unusual about that. Later the same man sent in for appraisal a “rare” variety of the same issue, designated as “type 1.”

“Naturally,” Mrs. Manning says, “we became suspicious. So we tried a simple test. We put the stamp in warm water. To our surprise the distinguishing feature of type 1, a design made of two complete scrolls, vanished in the water. What had the forger done? With consummate skill he had taken the cheap stamp which we had sent him and completed the scroll design upon it with water colors. Later we learned he was a convict, trying this sort of thing on an ambitious scale and from a prison cell, of all places, and getting as high as $600 apiece for the ‘rarities,’ thanks to the super-salesmanship of a confederate outside the prison.”

Usually, however, the racketeer in stamps confines himself to forging those of medium value. There are far more of them, and the crook runs less risk of detection. But there are outstanding exceptions. The story of the dealer who was swindled out of $65,000 is important because it illustrates one of the cleverest methods of the philatelic crooks. This dealer traveled from New York to Los Angeles to get a block of forty-three “genuine Hawaiian missionaries.” These stamps are such rarities that a single one, the two-cent blue, today catalogues at $15,000 unused and $12,000 used.

They looked all right to the dealer, so he bought them and returned to New York. A number of old letters and envelopes that bore every evidence of being genuine were attached to the stamps. However, the dealer made numerous tests on his new purchases. To his chagrin, there was no doubt regarding the falsity of the stamps as the paper upon which they were printed was made by a process not known or used prior to 1870, many years after the Hawaiian missionaries had become obsolete. The case was brought to trial in Los Angeles and the dealer was lucky enough to get his money back.

The genuine stamp is photographed and much enlarged by some counterfeiters. It is then retouched or entirely redrawn by an expert who strengthens the weak places on the picture in order to produce a sharp black replica of the original. Next the engraver rephotographs it, reducing it to the exact size of the genuine. The negative is then printed on a copper or zinc plate which has been coated with a sensitive emulsion. The plate is covered with ink, which attaches itself to the outlines of the stamp, the white background receiving no ink. The plate next is etched or eaten out in a bath of nitric acid or chloride of lime. This etching process is repeated until the entire white background has been eaten out sufficiently to produce a printing plate which is in relief. From this plate stamps can be printed which closely resemble the genuine.

But there are many difficulties in making the reproduction exact. The photo loses some of the fine details; furthermore, if any retouching is done it is not always precisely accurate, and when the zinc or copper plate is immersed in the acid, great care must be taken lest the acid eat out more than is desired. In the case of the missionary stamps the fakes were compared, by means of greatly enlarged photos, with the genuine, and it was noted that a row of counterfeit letters placed beneath a row of the originals for comparison purposes, showed the effect of the acid in etching out more than was desired.

William C. Moran, head of the secret service, says a counterfeit of the current two-cent stamp recently appeared in New York, and large numbers were used on letters through the mails, so excellent was its character. The agents raided the offices of a stamp broker and quantities of the forged stamps were seized in addition to many documentary stamps from which, according to the federal men, cancellations had been cleaned off with a chemical. The agents also found a gumming and perforating machine, but were unable to locate the plate used for printing.

What can be done to dealers who sell fake stamps as real? In America such shysters are blacklisted from the national organization and are trailed by secret service agents. If proof of their guilt is found, they can be fined and imprisoned.

The largest scale stamp counterfeiting scheme in America dates back to 1895, according to secret service records. The stamps involved were the ordinary two-cent variety. The trail was revealed when a federal man, glancing through a Chicago newspaper, saw an advertisement with a Canadian address stating: “We have $115 in U.S. two-cent stamps which we cannot use here. Will send them by express C.O.D., privilege of examination, for $100.

The agent replied, received the stamps and examined them. The stamps were well perforated and printed in sheets of five stamps only. However, to the agent’s expert eye, the color was a trifle lighter than the genuine. At first he decided this was due to a more open engraving process than the government was using. But under a powerful magnifying glass it was found the lithographic process had been used and that they were fakes.

Secret service men first investigated a rumor that a certain Chicago woman kept some machinery in a small room in her apartment. They found two large arc lights, a copying camera, a perforating machine, copper sheets and plates, gummed paper, and all other necessary paraphernalia for producing stamps. The woman was arrested and confessed she had organized and directed a large-scale gang with headquarters in Chicago. She made the stamps and distributed them through a Canadian novelty company. Another office of the gang was located in Chicago in charge of a man. In his office were found 30,000 counterfeits and 130 electroplates.

There are two main types of Confederate stamps and mailing envelopes, provisionals and regulars, or “general” issues. The provisionals were made just prior to the regular issue of the Confederate government late in 1861. Provisionals have been imitated on a large scale probably because their crude design and workmanship are easy to copy. The imitator doesn’t even have to engrave or lithograph these since the majority of the stamps are similar to postmarks. Nearly all the generals have also been counterfeited although they are not particularly rare. Single provisionals, on the other hand, catalogue well into the thousands. For instance, a ten-cent variety of Beaumont Texas yellow commands $3,500. And yet, ironically, the Confederate generals were lithographed and are therefore not as easy to imitate as are the provisionals.

The foreign stamps most often counterfeited, Mrs. Manning finds, are the nineteenth century stamps of the old Italian and German states and some of the copies of Great Britain.

“One of the cleverest of all deceptions practiced upon the unwary collector in Austria and France is that of repairing damaged stamps,” says L. Stewart Barr, well known collector. “Certain of them which would be of considerable value were they in perfect shape, can be so repaired by experts in Vienna or Paris that it is almost impossible to detect the fraud.

“Another racket perpetrated on the European collector is the making of ‘changelings.’ Two stamps have been made, let us say, by a certain foreign government from the same plate. But they are of different colors. One is valuable because of its rarity, the other is not. With chemicals the color of the common stamp may be changed to that of the precious one.”

A tete-beche is a pair of stamps connected together by the usual perforations but with the two heads upside down. This philatelic monstrosity, achieved accidentally by a faulty die used in the engraving process, is highly prized by some collectors. Many tete-beches have been counterfeited in Europe, particularly of the fifteen centimes Swiss yellow-buff stamp. The fakers take two stamps, turn them upside down, then carefully join the edges of the perforations together. The joint may be detected with a microscope.

Know your dealer, is Mrs. Manning’s most important word of advice to the average collector. And Mr. Barr adds: “Whenever a collector buys a rare stamp from a dealer he should make the dealer put his identifying mark on the back. Then, if the rarity proves spurious, the dealer will have to admit he sold it.

“By soaking the stamp in benzine any torn parts that have been repaired will show up, in most cases,” he advises. “The use of a quartz lens will detect certain color defects, but doesn’t help discover black cancellation marks. However, as all cancellations are not black, the quartz lens or powerful microscope will detect many of them. The method is likewise invaluable in finding changelings:”