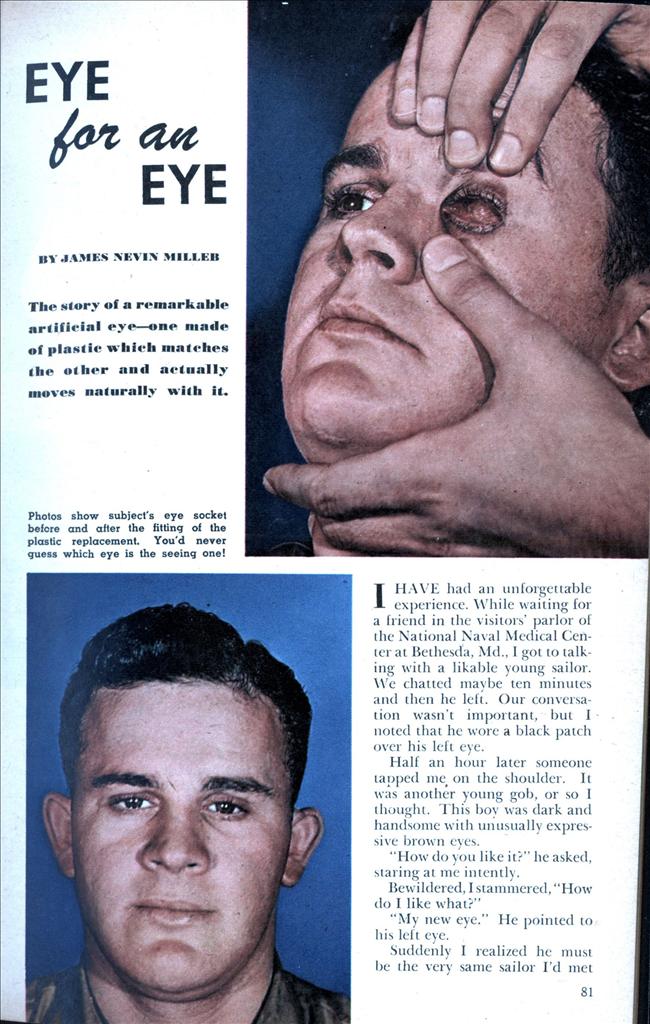 EYE for an EYE

The story of a remarkable artificial eye – one made of plastic which matches the other and actually moves naturally with it.

I HAVE had an unforgettable A experience. While waiting for a friend in the visitors’ parlor of the National Naval Medical Center at Bethesda, Md. I got to talking with a likable young sailor. We chatted maybe ten minutes and then he left. Our conversation wasn’t important, but I noted that he wore a black patch over his left eye.

Half an hour later someone tapped me on the shoulder. It was another young gob, or so I thought. This boy was dark and handsome with unusually expressive brown eyes.

“How do you like it?” he asked, staring at me intently.

“My new eye.” He pointed to his left eye.

Suddenly I realized he must be the very same sailor I’d met earlier. He explained that he was one of several hundred gobs who have been fitted with what undoubtedly is history’s most remarkable artificial eye. This eye is of plastic. It is weatherproof and color-fast. It is well nigh indestructible. You can throw it against a wall and it won’t break. It moves so smoothly in coordination with the natural eye that it can’t be distinguished easily from the real one. ft can be worn with hitherto unknown comfort. And the wearer can replace it for cleaning.

“Since the eye was developed right here in this building,” said my sailor friend, “I’d suggest you take a look at the laboratory setup. It’s a wonderland of science and art, under the supervision of the Navy’s Dental School.”

My curiosity thoroughly aroused, I got in touch with the Dental School’s commanding officer, Captain C. V. Rault, who referred me to the official in charge of the project, Commander John Victor Niiranen. The latter told me a story such as few men have been privileged to hear.

It seems that the war created a serious situation for civilians and fighting men who required artificial eyes. A single family group in Germany had been making practically all the glass eyes used in the United States, and with hostilities this supply had been cut off.

During the first three years of the war our military and naval medical authorities made a thorough study of the situation. They examined the nation’s facilities for making artificial eyes and found them sadly inadequate. They read every available scrap of information on the subject, but the whole fund was sketchy and offered no immediate solution.

There was only one thing to do—establish a new line of research—and one was started about May, 1944. The entire re- search was built around the theory that a naval dental officer and a medical illustrator make an ideal team to help the plastic surgeon restore lost or shattered portions of the face.

From the first it was decided to discard entirely the idea of making eyes of glass. Glass eyes break easily, some have been known to explode in the eye socket, others have become so etched by eye secretions that they have irritated the sensitive tissues.

Because no two natural eyes and sockets are exactly alike it became evident to the Navy investigators that a close impression of the eye socket and nearby area would be necessary in order to provide an adequate fit. The orthodox method of selecting an artificial eye from a large stock of eyes kept on hand seemed just as incongruous as it would be to select a person’s bridgework from a miscellaneous collection—though this had been the best available method of eye fitting for almost a hundred years.

There was a psychological element too. The investigators learned that all too often eye replacements made of glass were a source of embarrassment to their wearers. They even have been known to retard a patient’s rehabilitation.

With all this in mind it’s easy to understand why the emphasis throughout the research program was on the development of a plastic eye.

The plastic material they came to use is about as light as glass but it can be hand-painted much more effectively. The average acrylic eye weighs about one-third of an ounce. It is non-corrosive, it is unaffected by changes in temperature, it will even reflect light in much the same fashion as a natural eye. And in nearly every case the addition of the artificial member has restored either partially or totally the natural contours of the face.

If scratched from handling, the eye may be repolished. In case a clean break does occur it usually can be repaired; or the entire eye can be duplicated.

A beautiful colored movie has been made showing the performance of the operation for fitting the eye. The muscles attaching the eyeball are gathered so as to give maximum functioning in a movement approaching the normal as closely as possible. The movie reveals the remarkable fact that the eye replacement, because it is adapted to muscle coordination, is capable of lateral, oblique and, vertical movements of varying degree. When the artificial member contacts the surfaces of the eye socket it actually exerts a stimulating effect on orbital tissues, and as it is worn it increases the strength of the remaining eye-muscle segments.

This revolutionary technique has infinite possibilities, hardly less in peace than in war. Authorities say that never in medical history has anyone ever developed a really satisfactory artificial eye. Always there has existed an unfilled need for eye replacements which will help restore the normal contours of the face and yet satisfy esthetic requirements.

The first test eye was made by Lieutenant Commander Phelps J. Murphey back about June, 1944, a left eye for a young sailor. From all accounts he’s still wearing it today.

Officials at the Bethesda hospital started keeping records in January, 1945, when the program for the first time was regarded as being definitely out of the ex- perimental stage. Since then at Bethesda some 200 patients have been provided with plastic eyes, and in all naval installations throughout the country to date, at least 600 replacements have been made.

At Bethesda today seven specialists are working directly on the project: three dental officers, three medical illustrators-one a Wave—and one enlisted man. All are well grounded in dental and medical techniques. Working with Cmdr. Niiranen at Bethesda are Cmdr. La Mar Harris and Lieut. Cmdr. Herbert Towle, both of the Navy Dental Corps. I hardly need say that these experts are tops in their highly specialized field.

Cmdr. Niiranen is a perfectionist if I ever saw one. Certainly no acrylic eye ever leaves their laboratory unless it is a masterpiece of design and craftsmanship. I should know. For almost a week 1 saw them in action, virtually rebuilding new faces for our young Navy heroes—though not all their patients are enlisted men.

I he facial transformation achieved in the case of one officer was almost unbelievable. He walked with new dignity and courage, far better able to meet his daily problems than if he had been forced to wear a glass eye, a black patch or dark glasses.

When I asked this smiling officer what he liked best about his new orbit, he replied: “Well, it’s very lifelike and handsome. Equally important, it crips all the muscles behind the eyeball. The old-fashioned glass eye was mostly a shell, with no gripping power.”

The situation was authoritatively explained by Cmdr Murphey. He pointed out: “A working model was made of the eve muscles and their action carefully studied. The principal . muscle to be accommodated was the levator of the upper lid. Previous artisans did not seem to consider the possibility of con traction or loss of muscle lone following evisceration.

“Restorations in the past were made on the premise that since the normal eye is globular the replacement should be spherical. A careful assessment of the factors involved tends to discredit this line of reasoning. 1 he artificial member, while improving the appearance of the face, must also replace lost portions of tissue within the socket, so that normal facial contours are approximated. If the patient has worn previous types of artificial members typical changes are evident, caused by contracture and atrophy of the levator muscle, which does not have the opportunity for functioning it needs to sustain vigor.”

From the foregoing it will be obvious why dentists were assigned by the Navy to perfect an artificial eve. They have had invaluable experience in molding plastics to tissue in such things as bridges and plates. The process of making and fitting the revolutionary new acrylic eye is somewhat similar to that of making dentures. In fact it now seems reasonable to predict that in the future the making of artificial plastic eyes will be identified with the dental profession.

Today’s procedure in the Bethesda laboratories is to make two plastic eyes for each patient. It’s really essential that the wearer have two—a “day eye” and also a “night eye.” This is because by day the pupil of the eye is small and at night it is large. The range varies between 2.5 to 5.5 millimeters. Thus far about 60 patients have been given a “pair” of eyes at Bethesda and the plan has proved very acceptable.

Brown has been found the most prevalent shade of the human eye, with blue, gray and green next in order.

No stock eyes or irises are maintained at Bethesda or at any of the other naval hospitals. Each eye is fashioned and colored individually.

The most complex problem confronting the pioneers was color permanency. The next difficulty was how best to shape the artificial member in order to restore maximum esthetic appeal, including the bringing out of the contours of the tissues and muscles surrounding the plastic eye so they would be a perfect match for those around the natural eye. All these early problems have now been licked, but it took about two years of painstaking experimentation.

An interval of between two and four weeks must elapse between the operation on the eyeball muscles and the first steps of the fitting, for it is of primary importance that the eye socket be fully healed.

In fitting, the first step is the making of an accurate impression of the eye socket. The impression material is mixed with water to approximately the consistency of toothpaste and directly applied. No anaesthetic is required and there’s no pain or discomfort to the patient.

The impression so obtained is placed in a fixing solution for 15 minutes to give it a rubber-like consistency and prevent shrinkage. From this a stone cast is made, and wax is poured into the cast and allowed to harden.

The working wax pattern is tried in the eye socket and checked for fit and external esthetics. When all is right a molding apparatus called an “injection flask,” specially designed to “cure” or polymerize the raw plastic, is used to reproduce the model into the plastic portion of the artificial eye.

After the cured plastic sclera is double-checked for appearance and contour, the iris is located, and the sclera portion cut down to receive it. The medical illustrator takes over here and in amazingly realistic fashion paints in by hand the blood vessels and the iris in their proper color. And as a last step the artificial member is coated with a clear plastic.

It’s an eye for an eye. The new eye is not flesh and it has no ability to see—but no one glancing at it would ever suspect that.