There is actually a company called Doggles that sells prescription eyewear for your dog. 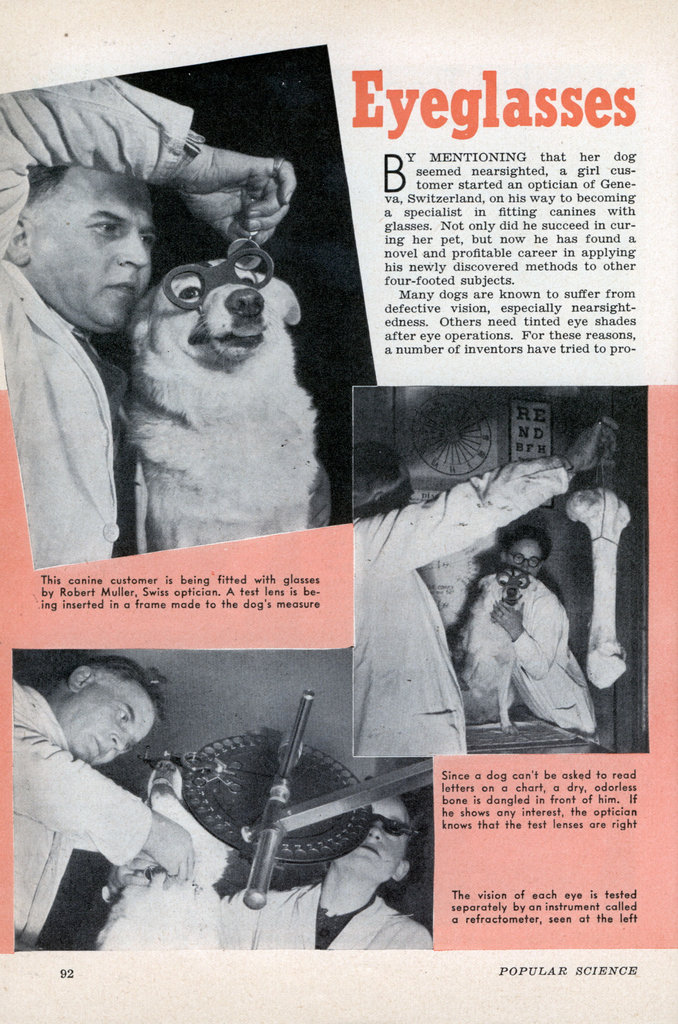 BY MENTIONING that her dog seemed nearsighted, a girl customer started an optician of Geneva, Switzerland, on his way to becoming a specialist in fitting canines with glasses. Not only did he succeed in curing her pet, but now he has found a novel and profitable career in applying his newly discovered methods to other four-footed subjects.

Many dogs are known to suffer from defective vision, especially nearsightedness. Others need tinted eye shades after eye operations. For these reasons, a number of inventors have tried to produce glasses suitable for dogs, only to fail because the animals found the spectacles uncomfortable or could not keep them on. The design created by Robert Muller, the Swiss optician, is declared to be the first to overcome these objections. Attached to the dog’s collar, a light metal frame resting on its head supports the glasses, which are secured firmly in place by an elastic band passing under its jaws.

Arriving at the eye clinic, a pet undergoes a thorough examination with the aid of up-to-date scientific instruments. One of them measures the distance between one eye and the other, so that the breadth of the spectacle

frame may be proportioned accordingly. Another instrument determines the curvature of the eyes, to aid in prescribing the proper corrective lenses.

When this has been done, the optician verifies his prescription, just as he would with a human patient, by inserting test lenses in an empty frame until he finds a pair that exactly suits the dog’s eyesight. Since rows of letters and other standard test charts are useless for these trials, he has devised an ingenious expedient.

A dry bone is covered with fat and given to the dog, which is allowed to lick off the bone for several days in succession. Thus the dog becomes accustomed to the outline of the bone. Later, the same bone, with all trace of odor removed, is suspended fifteen feet away from the animal. The lenses are then tried out. When the dog notices the bone, the optician knows that he has the proper fitting.