Fabulous Floating Control Center Will Guide us to the Moon (Feb, 1968) 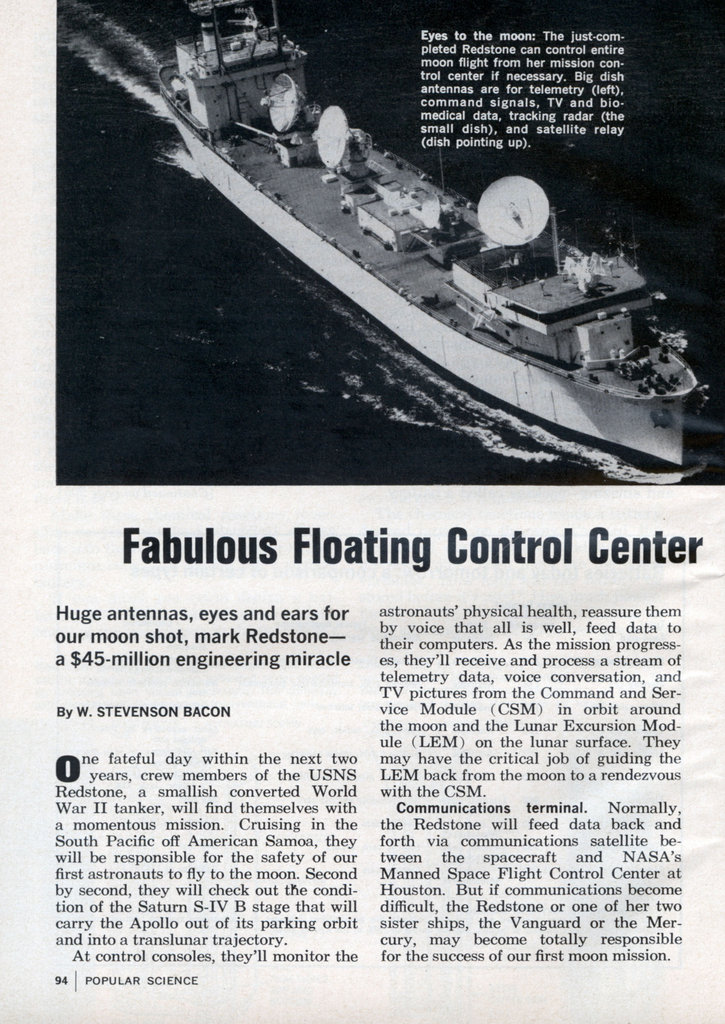 Fabulous Floating Control Center Will Guide us to the Moon

One fateful day within the next two years, crew members of the USNS Redstone, a smallish converted World War II tanker, will find themselves with a momentous mission. Cruising in the South Pacific off American Samoa, they will be responsible for the safety of our first astronauts to fly to the moon. Second by second, they will check out the condition of the Saturn S-IV B stage that will carry the Apollo out of its parking orbit and into a translunar trajectory.

At control consoles, they’ll monitor the astronauts’ physical health, reassure them by voice that all is well, feed data to their computers. As the mission progresses, they’ll receive and process a stream of telemetry data, voice conversation, and TV pictures from the Command and Service Module (CSM) in orbit around the moon and the Lunar Excursion Module (LEM) on the lunar surface. They may have the critical job of guiding the LEM back from the moon to a rendezvous with the CSM.

Communications terminal. Normally, the Redstone will feed data back and forth via communications satellite between the spacecraft and NASA’s Manned Space Flight Control Center at Houston. But if communications become difficult, the Redstone or one of her two sister ships, the Vanguard or the Mercury, may become totally responsible for the success of our first moon mission.

How do you aim an antenna to communicate with a tiny craft 238,000 miles away? It’s hard enough to do it on solid ground, but to do it from a ship takes enough equipment and ingenuity to make the Redstone, engineered by NASA, one of the marvels of the space age. It’s a little like trying to hit a flying insect a mile away with a rifle while riding on a roller coaster.

The equipment. Crammed below the decks of the Redstone is 455 tons—30 million dollars’ worth—of radar, telemetry, command and voice receivers and transmitters, computers, masers, lasers, and the most sophisticated shipboard navigation equipment ever conceived.

Two large 1230 Univac computers will decode and process telemetry data to and from the spacecraft. A third, exclusively for navigation, will receive estimates on the Redstone’s attitude, velocity, and po- sition, and compute the most reliable figures of the ship’s actual position for tracking spacecraft signals.

Guiding the Apollo and overseeing its mission require that the exact position of the ship be known down to a number of decimal places at all times. Each roll of the ship must be compensated for, or the enormous high-gain dish antennas will lose their signals.

All in all, the Redstone carries three huge 30-foot parabolic dishes for command and control signals to the spacecraft, TV and biomedical data from the spacecraft, and one for receiving and relaying data to and from Houston.

The $15-million Redstone herself was made by “jumboizing” a T-2 tanker at General Dynamics shipyards. A longer and wider midsection brings her length to 595 feet and houses electronic gear, a ship’s crew of 88, and 106 technicians.