National Geographic
Issue: Mar, 1930
Posted in: Advertisements, Photography
1 Comment on Fading memories or fadeless movies… which you bring back? (Mar, 1930)

Fading memories or fadeless movies… which you bring back? (Mar, 1930) 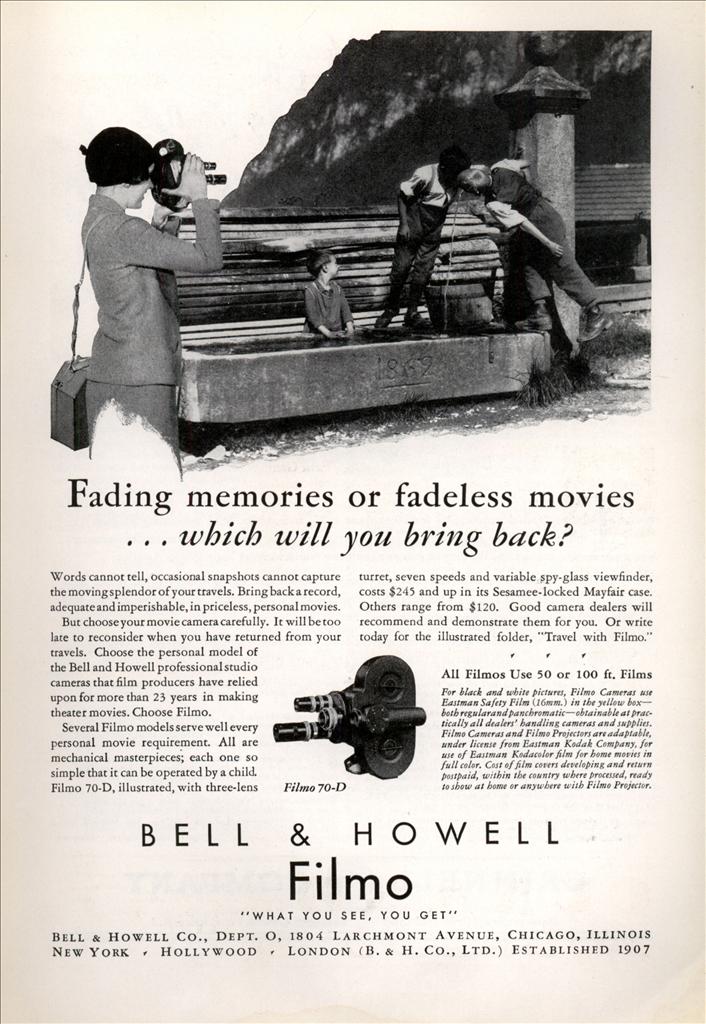 Fading memories or fadeless movies… which you bring back?

But choose your movie camera carefully. It will be too late to reconsider when you have returned from your travels. Choose the personal model of the Bell and Howell professional studio cameras that film producers have relied upon for more than 23 years in making theater movies. Choose Filmo.

Several Filmo models serve well every personal movie requirement. All are mechanical masterpieces; each one so simple that it can be operated by a child. Filmo 70-D, illustrated, with three-lens turret, seven speeds and variable spy-glass viewfinder, costs $245 and up in its Sesamee-locked Mayfair case. Others range from $120. Good camera dealers will recommend and demonstrate them for you. Or write today for the illustrated folder, “Travel with Filmo.”

For black and white pictures, Filmo Cameras use Eastman Safety Film (16mm.) in the yellow box— both regular and panchromatic—obtainable at practically all dealers’ handling cameras and supplies. Filmo Cameras and Filmo Projectors are adaptable, under license from Eastman Kodak Company, for use of Eastman Kodacolor film for home movies in full color. Cost of film covers developing and return postpaid, within the country where processed, ready to show at home or anywhere with Filmo Projector.