Why does it not surprise me that modern customized direct mail fund raising was invented by the Catholic church? 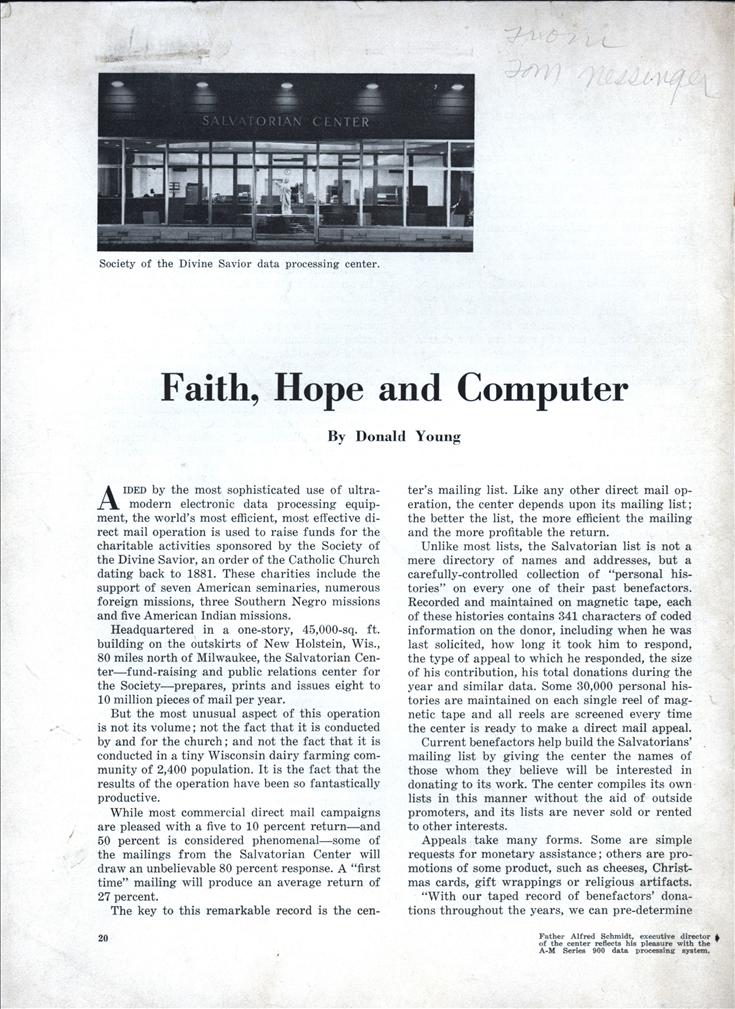 Aided by the most sophisticated use of ultramodern electronic data processing equipment, the world’s most efficient, most effective direct mail operation is used to raise funds for the charitable activities sponsored by the Society of the Divine Savior, an order of the Catholic Church dating back to 1881. These charities include the support of seven American seminaries, numerous foreign missions, three Southern Negro missions and five American Indian missions.

Headquartered in a one-story, 45,000-sq. ft. building on the outskirts of New Holstein, Wis., 80 miles north of Milwaukee, the Salvatorian Centerâ€”fund-raising and public relations center for the Societyâ€”prepares, prints and issues eight to 10 million pieces of mail per year.

While most commercial direct mail campaigns are pleased with a five to 10 percent returnâ€”and 50 percent is considered phenomenalâ€”some of the mailings from the Salvatorian Center will draw an unbelievable 80 percent response. A “first time” mailing will produce an average return of 27 percent.

Unlike most lists, the Salvatorian list is not a mere directory of names and addresses, but a carefully-controlled collection of “personal histories” on every one of their past benefactors. Recorded and maintained on magnetic tape, each of these histories contains 341 characters of coded information on the donor, including when he was last solicited, how long it took him to respond, the type of appeal to which he responded, the size of his contribution, his total donations during the year and similar data. Some 30,000 personal histories are maintained on each single reel of magnetic tape and all reels are screened every time the center is ready to make a direct mail appeal.

Current benefactors help build the Salvatorians’ mailing list by giving the center the names of those whom they believe will be interested in donating to its work. The center compiles its own lists in this manner without the aid of outside promoters, and its lists are never sold or rented to other interests.

Appeals take many forms. Some are simple requests for monetary assistance; others are promotions of some product, such as cheeses, Christmas cards, gift wrappings or religious artifacts.

“With our taped record of benefactors’ donations throughout the years, we can pre-determine how we’re going to make out on a given solicitation with considerable accuracy,” says Father Alfred Schmit, executive director of the Salvatorian Center. “By electronically sorting through our files, we can pick out a choice mailing list comprising names of donors whose past histories indicate that they will be receptive to the type of appeal we have in mind. That way, we can direct our appeals more accurately, thereby keeping our costs to a minimum, with the desirable result that a greater portion of every donated dollar goes directly to the charitable work for which it was intended.”

This charitable work includes the support of the Society’s 1,000 students at seminaries in St. Nazianz, Wis.; Sioux City, Ia.; Blackwood, N. J.; Colfax, Ia.; Lanham, Md.; Gait, Calif.; and Menominee, Mich. It also includes the support of Negro missions in Phenix City, Ala.; Huntsville, Ala.; and Columbus, Ga.; of Indian missions in Grande Ronde, Jordan, Lyons, Scio and Jefferson, Ore.; and of foreign missions in Tanganyika, Formosa and the Congo.

As a fund-raising medium, the use of direct mail is not new to the Society of the Divine Savior. The Salvatorians sent out their first appeal for financial assistance in 1920 by mailing a few handwritten letters to personal friends. Later, as the number of benefactors grew, typewriters were purchased and employes were hired to prepare typed letters of solicitation; names and addresses were maintained on 3×4-in. file cards.

In 1950, the file cards gave way to punched cards and tabulating equipment. In January 1959, an IBM 650 magnetic tape system was adopted. This was replaced in November 1960, when an Addressograph-Multigraph Series 900 electronic data processing system was installedâ€”the first of its kind in the country.

The heart of the Series 900 system is the 943 file processor. It is externally programmed by means of control panels to read, write and compute data in unit or grouped record format simultaneously, and it features core storage and fully-transistorized arithmetic and logical devices in modular form. Multiple decisions may be effected in parallel.

A personal “thank you”

The Series 900 tape transport units are used on-line. Up to four may be used as separate inputs, and up to 10 used as outputs.

The system’s card reader will operate at speeds ranging from 250 to 750 cards per minute and it will handle either 80 or 90-column cards.

Addresses selected from the magnetic tape mailing list are printed out on a reverse carbon strip. These strips are inserted directly into the mailing department’s addressing machine (an A-M Model 831 transfer printer) and converted to direct address images. This creates the impression that the envelopes have been individually type-addressed and not merely labeled.

When incoming mail is received at the Salvatorian Center, it is mechanically dated and slit open. Revenue clerks check the contributions against response cards, which are returned with the donations, and the cards are then sent through an IBM card punch proof, which prepares an adding machine tape as the operator punches in the amount of the contribution. A separate adding machine tape is run on the cash itself for balancing purposes.

Returned response cards and the document listing the names of potential new donors, which are to be added to the mailing list, are processed through keypunches. Every week, the master tapes of donors’ histories are up-dated with information obtained from these cards. The information is converted to magnetic tape in random sequence at 600 cards per minute, then sorted into donor sequence.

New donations, address changes, new names, names to be deleted from the list and similar changes are recorded on new master tapes. The old tapes are stored for two weeks so that, in the event anything were to happen to the current master tapes, two previous sets of tapes containing information not more than two weeks old would be available to continue operations.

Reminders are sent out as part of a standard procedure at the Salvatorian Center, as are letters of acknowledgement for all donations. The latter are prepared on seven batteries of automatic typewriters which produce “personally” typed “thank you” and not a routine form letter. To sign this vast bulk of mail, Father Alfred’s “personal” signature is affixed to each letter by one of three Autopens, an instrument designed to follow the outline of an irregular program wheel and reproduce the signature, as if it were personally signed.

Stuffed, sealed and bundled The data processing and acknowledgement departments are just a part of this compact organization, dedicated to the most efficient conduct of direct mail solicitation. Other departments include accounting (which receives incoming mail and controls all revenues collected) ; printing (where all direct mail literature is prepared) ; binding; stock and warehouse; mailing; and all correspondence files.

The entire organization is geared to the limits of its daily output, which has been set at 100,000 pieces. Printing is done on offset presses; all mailings are machine stuffed, sealed and bundled.

Included in this output are two magazines, edited, printed and distributed at the Salvatorian Center. Catholic Youth is a children’s magazine for youngsters 10 to 14 years of age. It is published 10 months a year, excluding July and August, and has a circulation of 50,000 to 60,000 copies per issue. Salvatorians is a digest-sized news medium for contributors to the Society. It is published five times a year and reaches over 50,000 persons per issue.

Due to the tremendous volume of mail pouring out of the Salvatorian Center, the organization has been classified by the Post Office as an independent contract station. Its mailing address, although the center is located within the village of New Holstein, is officially listed as simply: “Salvatorian Center, Wis.” Mail trucks back up to the building and transport mail from there just as they do from the regular post office in town.

The Salvatorian Center employs the services of three priests (Father Wigbert Lainweber, S.O.S., Father Alfred Schmit, S.O.S. and his assistant, Father Roy Mollen, S.O.S.), six Brothers (a Brother is a layman, specially prepared to serve the Salvatorian priests through their specialized skills in many fields) and 94 lay personnelâ€”80 full-time and 14 seasonal employes.

A bronze plaque Four of these people are employed in the computer room. Additional help is used in the operation of the 12 card punches that are required to keep up with the tremendous volume of work that passes through the center. During the peak season, as much as 80,000 pieces of incoming mail are received and processed weekly.

Although 60 percent of the available time in the Salvation Center’s data processing department is devoted to fund-raising reports and analyses, many other duties must be performed by the center’s staff. These include the maintenance of numerous records associated with the fund-raising activity. For example, anyone who contributes $365 toward the support of a boy’s seminary education (the amount needed to maintain that boy for one school year) is invited to attend the boy’s First Holy Mass and Ordination. This requires careful record-keeping.

Anyone who contributes $500 to one of the Society’s seminaries may have his name inscribed on a bronze plaque affixed to one of the seminary rooms as a memorial. This also means additional recordkeeping problems.

“Obviously,” says Father Alfred. “In supporting the work of the church, we must be as cost-conscious as we possibly can. We utilize every means of cutting our expenses and increasing the profit of our operationâ€”even to the point where we screen all of our incoming mail and sell the stamps to a commercial broker.

“Therefore, if we invest $12,000 per month in the rental of Addressograph-Multigraph equipment to make our job easier, faster and more efficient, you can be sure that it’s money well spent. We’ve investigated every available alternative and have decided that this is the most economical way to get the job done.”

In addition to direct mail applications, all general accounting work will be added to the A-M 900 system. Some 24-hours a week will be available for these applications.