Fame and Fortune from Sandwiches (Sep, 1936) 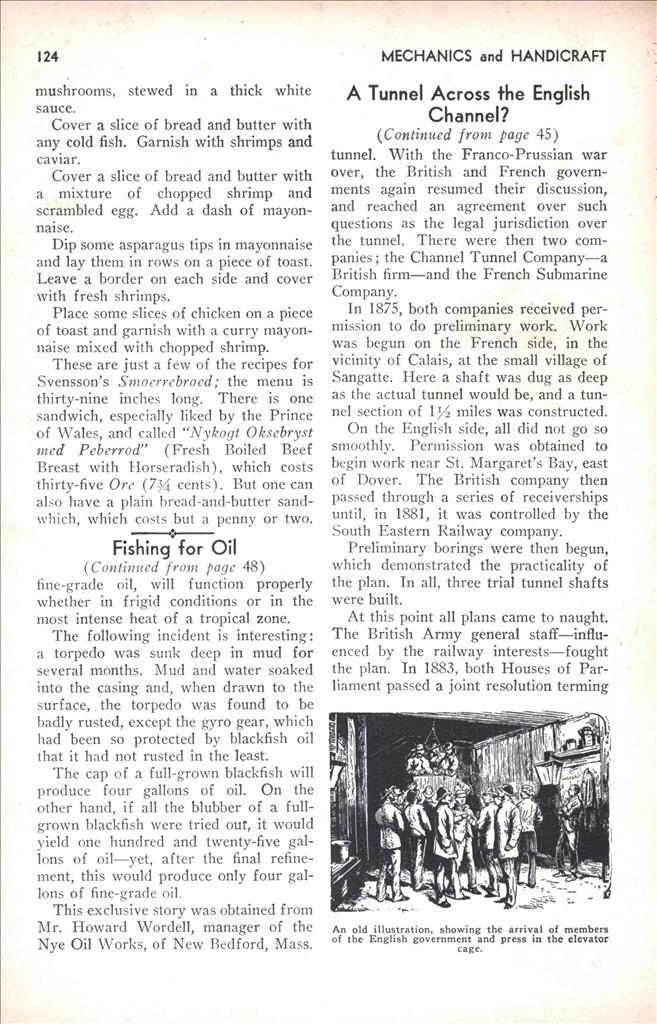 Fame and Fortune from Sandwiches

The Sandwich King of Denmark and his two hundred varieties of Smoerrebroed.

THE proverb, “The way to a man’s heart lies through his stomach,” could well have originated in Denmark. The Danes love good food and, above all, they like their special sandwiches, called Smoerrebroed. Travelers, too, when reminiscing about their visits to Copenhagen, are as likely to grow enthusiastic about Smoerrebroed as about the sights of the city.

It was “Oskar Davidsen’s Vinstue” (wineshop and restaurant) in Copen- hagen, that made the Danish sandwich internationally famous. The proprietor, Mr. Axel Svensson, was recently knighted and, it is said that, upon that occasion, King Christian X greeted him with the following words: “We are colleagues, I believe. T am the Danish King. I hear that you are the Sandwich King.”

A poor boy, who had to go to work when he was fourteen years old to support his widowed mother and her four children, found a job as dishwasher twenty-five years ago in the restaurant, then a small one. Today he is the proprietor and one of the most successful men in Denmark. The reason has been hard work, plus an idea—Sandwiches.

Smoerrebroed (literally “buttered bread”) was served in every wineshop as an adjunct to wine and schnapps (hard liquor). Axel Svensson glorified these bits of bread and meat and cheese, thought up new combinations, new garnishes, new flavors. Today there are served in the enlarged Vinstue two hundred varieties. These are made on four different kinds of bread, so that there are really eight hundred types of sandwiches which can be eaten in this old-fashioned shop.

The visitor does not find a de luxe restaurant; there are no tablecloths, and the waiters wear leather aprons. But wine, schnapps and food are of uniform excellence. The two hundred varieties of sandwiches, arrayed on long tables down the center of the room, smell just as good as they look. Twenty-five people are engaged solely in making Smoerrebroed, exclusive of the other employees. In order to become a “sandwicher” at Oscar Davidsen’s, one must go through a difficult examination in the fine art of sandwich making and bread slicing.

If the rambling old restaurant is not particularly smart, the same cannot be said of its clientele. King Edward VIII, when Prince of Wales, was a customer whenever he was in Copenhagen and said that he had never had such a “glorious food experience.” Lord Whitcombe and his wife recently flew over from London just to have lunch at Davidsen’s, then flew back to London immediately.

Here are a few of Axel Svensson’s favorite recipes for open sandwiches: Cover a piece of bread and butter with a thin, scraped fillet of raw beef. After garnishing it with peas, grated horseradish and chopped onion, crown it with the yolk of a raw egg, which is broken over it the instant before the sandwich is eaten.

Cover a slice of bread and butter with cold, grilled herring. Cover with finely-chopped radishes, making a hollow in the center to hold a raw egg yolk. This is just as good without the egg.

Cut two strips of smoked eel. Lay them along the edge of the bread. Fill the center with cold scrambled egg.

Cover a slice of bread and butter with a thin slice of smoked tongue. Garnish with a meat or a vegetable salad.

Place thin strips of crisp bacon on a slice of bread and butter. Cover with mushrooms, stewed in a thick white sauce.

Cover a slice of bread and butter with any cold fish. Garnish with shrimps and caviar.

Cover a slice of bread and butter with a mixture of chopped shrimp and scrambled egg. Add a dash of mayonnaise.

Dip some asparagus tips in mayonnaise and lay them in rows on a piece of toast. Leave a border on each side and cover with fresh shrimps.

Place some slices of chicken on a piece of toast and garnish with a curry mayonnaise mixed with chopped shrimp.

These are just a few of the recipes for Svensson’s Smoerrebroed; the menu is thirty-nine inches long. There is one sandwich, especially liked by the Prince of Wales, and called “Nykogt Oksebrystmed Peberrod” (Fresh Boiled Beef Breast with Horseradish), which costs thirty-five Ore (7-3/4 cents). But one can also have a plain bread-and-butter sandwhich, which costs but a penny or two.