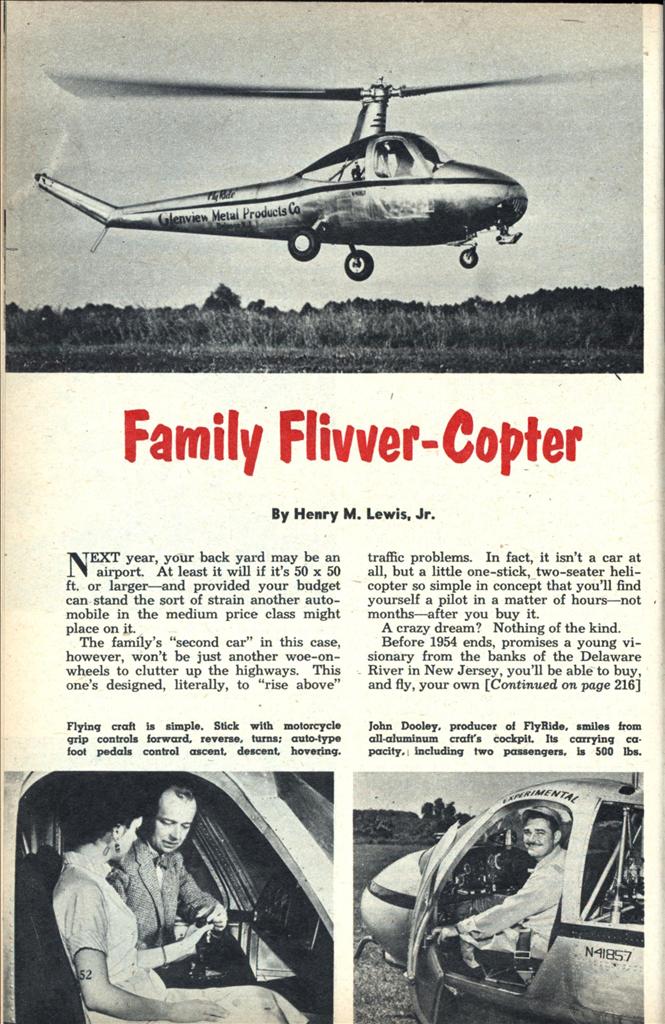 NEXT year, your back yard may be an airport. At least it will if it’s 50 x 50 ft. or larger—and provided your budget can stand the sort of strain another automobile in the medium price class might place on it.

The family’s “second car” in this case, however, won’t be just another woe-on-wheels to clutter up the highways. This one’s designed, literally, to “rise above” traffic problems. In fact, it isn’t a car at all, but a little one-stick, two-seater helicopter so simple in concept that you’ll find yourself a pilot in a matter of hours—not months—after you buy it.

A crazy dream? Nothing of the kind.

Before 1954 ends, promises a young visionary from the banks of the Delaware River in New Jersey, you’ll be able to buy, and fly, your own little egg beater. Moreover, you’ll be able to park it and launch it where this year’s petunias grew—somewhere between the kitchen door and the family garage.

The youthful Henry Ford of the flying business who’s out to put a personal plane in your private pasture is 34-year-old ex-GI John T. Dooley, a practical man who makes dreams pay off.

Mr. Dooley, who in four years has parlayed a mechanical engineering talent and an $8,000 nest egg into a $1,500,000 metal-products business (Glenview Metal Products Co., Delanco, N. J.), is making plans for assembly line production—”before the last office-to-seashore hop is made this summer”—of the world’s first civilian-slanted, popular-priced, easy-to-pilot helicopter. He calls it the Fly-Ride!

Dooley’s ingenious flying machine for the common man, which soon may have you fuming at Sunday pilots instead of Sunday drivers, is the last word in simplicity.

“No longer,” he points out proudly, “do you have to be an octopus to fly a helicopter.”

In contrast to existing models which, it should be pointed out, are conducive to St. Vitus Dance in that they demand almost constant manipulation of both hands and both feet to keep all their controls coordinated, the Fly-Ride has only two controls.

One is the stick with a motorcycle grip nestled in the arm rest between the two seats of the 35-ft.-long skycraft which stands only eight ft. seven in. high with its blades in neutral position. The stick controls all the Fly-Ride’s movements on the horizontal plane —forward, reverse and turns.

Ascent and descent are controlled by a conventional automobile-type accelerator pedal, workable with one foot. Midway in the pedal’s range of play, the craft can be made to hover.

So simple, in fact, is the maneuvering of this first single-stick helicopter, the world’s first designed exclusively for civilian use, that a novice can learn to handle it in a few hours, or at most with a single day’s instruction. Pilots train for six months to-master the complicated, five-control military models and the relatively few ‘copters of this same type that have been made available in recent years to non-military users.

The latter, incidentally, are tagged at $25,000 and up. Mr. Dooley figures he’ll tee off his Fly Ride this year at $8,000, with a drop to $5,000 as his assembly-line production is stepped up. Eventually, he sees the price settling around $3,000—in the range of some of today’s popular cars.

Mechanically, here’s how FlyRide works: rpm output of the 140-hp Lycoming engine— in the nose of the ship for easy servicing— controls the pitch of the lifting rotor blades. To increase rpm for ascension, the foot throttle is advanced. To decrease rpm for decension it is retarded. Hovering flight is accomplished by adjustment of the two maneuvers.

FlyRide, in addition to its simplicity of operation, has an important safety feature, too. The rotor blades automatically go into low autorotative pitch if the engine stops, permitting the craft to descend in a 15-deg. glide path at the rate of 750 ft. per minute, even if power should fail entirely.

His brainchild isn’t going to be expensive to run, either. It’ll get better gasoline mileage than some cars on the road today, according to Dooley’s calculations. A full tank of 22 gallons will carry it 300 miles—an average of 13.6 mpg.

Weight of the all-aluminum ship will be 1,150 lbs. and its load capacity over 500— enough for two passengers, a moderate baggage load, fuel and oil.

And what about other models after Dooley has filled the need for two-seater helicopters? After this one, which he calls his “sport coupe” model, he intends to branch out into fourseater “family sedans.” In short, he’s taking personal charge of bringing the air age to your doorstep.