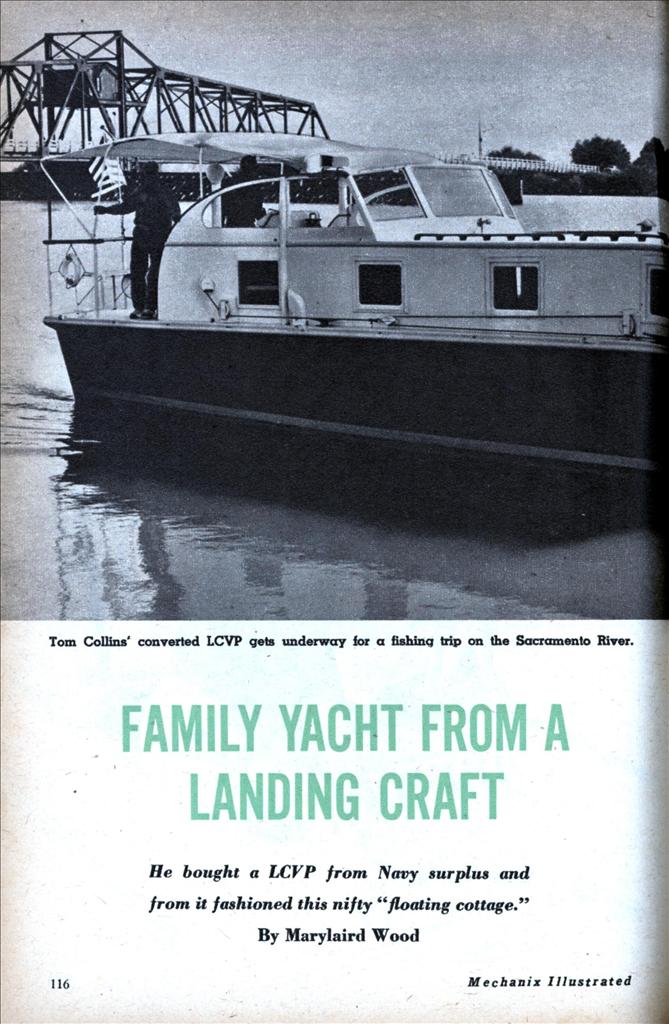 FAMILY YACHT FROM A LANDING CRAFT

He bought a LCVP from Navy surplus and from it fashioned this nifty “floating cottage.”

IT ALL began when Thomas L. Collins of Alameda, Calif., bought a LCVP from Navy surplus. The discarded landing craft sold for $24.00. It didn’t look much like a family boat but Tom thought it had possibilities.

Collins and his 14-year-old son, Tom, Jr., love the water. When they bought the LCVP they already owned a 30-foot sailboat but the problems of overnight accommodations, limited cabin space, and the fact that the ketch required a crew, took some of the fun from weekend sailing. What Tom and his son really wanted was a yacht they could take up to the Sacramento River for cruising and fishing. They wanted plenty of deck-space, convenient sleeping quarters and a trim cabin, at a price easy on the family budget. Although his only experience with boat-building was assembling a 14-foot Chris-Craft runabout from a kit, Tom bought the LCVP and set to work.

After almost two years of weekend labor, this amateur with the help of young Tom and a friend, Fred Steiner, has completed “The Bullfrog,,, a 36-foot cruiser that ranks in the luxury class.

It boasts a complete galley with a four-burner butane range with oven, a 30-gallon water heater with table-top counter, a sink of stainless steel, a 12-cubic foot icebox and 24 cubic feet of cupboard space. All work surfaces are Micarta-topped. All the ceilings are soundproofed with acoustical tile.

In the cabin, paneled with marine plywood, are a double-decker bunk and a built-in table with seating space for six. Collins has built ingenious cabinets on all available walls; he carefully engineered the storage space for clothing, fishing gear, water skiis, swimming equipment and food supplies. Other lockers store life-preservers, sleeping bags and deck chairs. There are, in all, 70 cubic feet of cupboards.

Space-saving, but convenient, are the cabin-bunks. Both measure 74 inches in length. The lower bunk is 36 inches wide; the upper is 28 inches. The upper bunk folds down against the wall to form a backrest for daytime seating. Both beds have foam rubber mattresses.

Next to the bunks, and separating the cabin from the galley, is a clothes closet that measures six feet ten inches high and three feet wide.

Collins had no blueprints for his cruiser. In fact, he says he built it “hit or miss.” However, he had some aid from a boat-expert friend, Jack Freitas, who also put a “cabin atop” an LCVP.

Collins says it took four months of weekend work just to prepare the hull. In fact, this stripping out is the most discouraging phase of the work, for instead of building up the handyman is tearing down. First Tom had to remove all the armor plate. Then it took weeks to clean up grease and Diesel fuel. All the old paint had to be removed, layer after layer of it.

Another arduous task was plugging up all the holes—almost 400 in all—left after the plate was taken off. To do this job, Collins bought plugs that were formerly used for plugging machine gun bullet holes. Each little cone had to be sawed flush, then sanded, then glued, then puttied, then sanded. Collins reiterates: “It was quite a job!”

The next step was to put up the rough framework of the cabin and stretch on the canvas. Protected by a base coat of paint and the painted canvas, the cabin was ready for winter weather.

Throughout the winter, Collins worked in the engine room. The engine is a 115-horsepower Chrysler Crown with V-drive, two-to-one reduction. Collins bought it used and rebuilt it in his basement. The engine was salvaged from a boat that had been sunk in San Francisco Bay.

These two phases of the work took almost a year. It was during the second year that Collins took up his saw, hammer and paint brush to tackle the interior finishing details.

The amateur boat-builder used paint gaily. He selected shades of rosy biege, brown and lime-green for his interiors. All the wood trim is either teak or mahogany. He had even added valances to the windows and a wall-to-wall shag rug on the floor of the all-yellow bath. For comfort—and a bit of decorating whimsy—he has installed a little antique pot-bellied stove in the cabin.

On deck, Collins has used pearl-gray and bright yellow canvas, teak seats, mahogany railings. The hatches are Fiberglas. Of course, he kept the winch and the landing ramp. This deck, which is six inches above water level when lowered, is now lacquered a mottled green and is an ideal spot for fishing, sunning, diving and water-ski take-offs. For more water-fun, Collins tows along his little outboard, “The Polliwog,” which he built from a kit.

The cruiser’s exterior is bright and gay, combining turquoise, coral and cream for colors on the hull. The speed is seven knots—just right for leisurely cruising. After, under the stern, is the 12-volt generating system, the engine, the air-compressor plant and automatic fire extinguisher.

Tom finished his cruiser in August, 1955—just in time to take advantage of the warm fall weather in the Sacramento River country. It was a big job and it took a long time but Tom says it’s all been fun. And he’s had the satisfaction of doing it himself.

Now that the job’s finished, you’d never guess the cruiser’s origin. It’s a yacht that is streamlined, convenient, and planned for sun-loafing and recreation. Actually, it is a floating summer cottage.