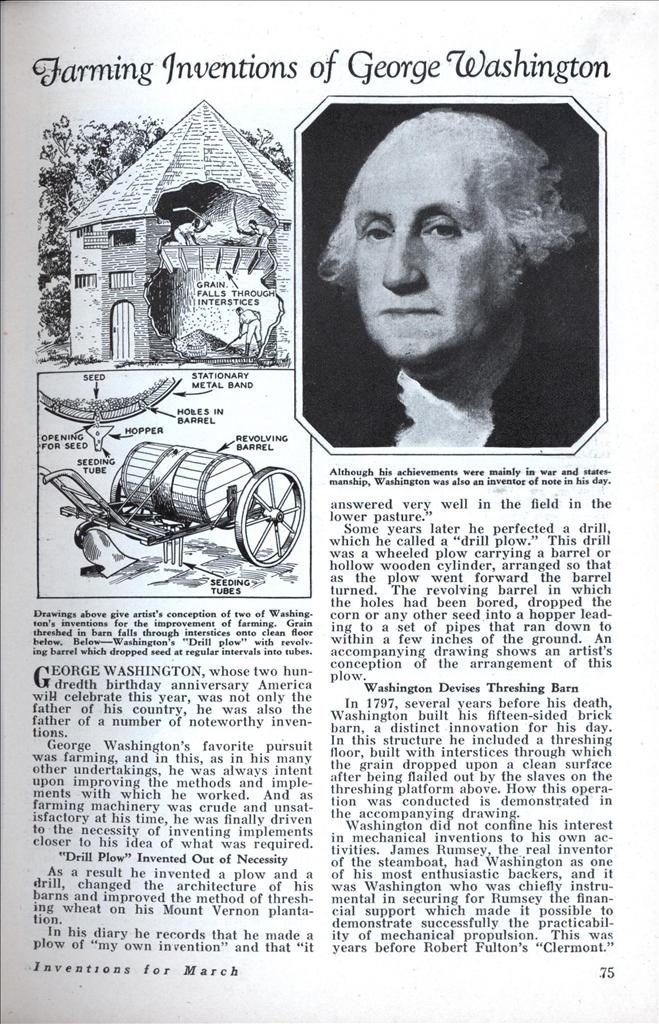 George Washington, whose two hundredth birthday anniversary America will celebrate this year, was not only the father of his country, he was also the father of a number of noteworthy inventions.

George Washington’s favorite pursuit was farming, and in this, as in his many other undertakings, he was always intent upon improving the methods and implements with which he worked. And as farming machinery was crude and unsatisfactory at his time, he was finally driven to the necessity of inventing implements closer to his idea of what was required. “Drill Plow” Invented Out of Necessity As a result he invented a plow and a drill, changed the architecture of his barns and improved the method of threshing wheat on his Mount Vernon plantation.

In his diary he records that he made a plow of “my own invention” and that “it answered very well in the field in the lower pasture.”

Some years later he perfected a drill, which he called a “drill plow.” This drill was a wheeled plow carrying a barrel or hollow wooden cylinder, arranged so that as the plow went forward the barrel turned. The revolving barrel in which the holes had been bored, dropped the corn or any other seed into a hopper leading to a set of pipes that ran down to within a few inches of the ground. An accompanying drawing shows an artist’s conception of the arrangement of this plow.

Washington Devises Threshing Barn In 1797, several years before his death, Washington built his fifteen-sided brick barn, a distinct innovation for his day. In this structure he included a threshing floor, built with interstices through which the grain dropped upon a clean surface after being flailed out by the slaves on the threshing platform above. How this operation was conducted is demonstrated in the accompanying drawing.

Washington did not confine his interest in mechanical inventions to his own activities. James Rumsey, the real inventor of the steamboat, had Washington as one of his most enthusiastic backers, and it was Washington who was chiefly instrumental in securing for Rumsey the financial support which made it possible to demonstrate successfully the practicability of mechanical propulsion. This was years before Robert Fulton’s “Clermont.”