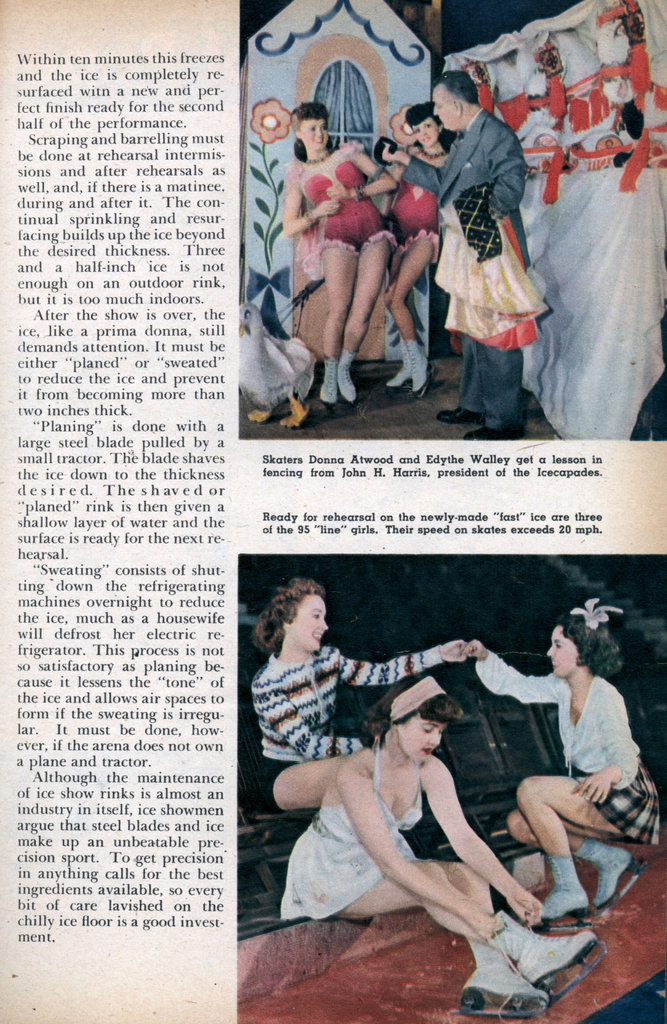 The cold facts about the smooth sheet of ice that gives wings to the feet off the skaters in Icecapades, biggest of Ice shows.

BY Margot Patterson and Allan Gould

IF THE millions of people who witness the big ice-travaganzas yearly ever stop to think about the sheet of ice on which the skaters pirouette, it is probably only to wonder idly how the red, white and blue pattern gets inside the ice.

Yet the manufacture and maintenance of that thin sheet of frozen water is more important than the stars of any show. A featured performer could break a leg and the show would continue, but without the ice there could be no performance. So in each of the arenas where an ice revue plays during a season, the ice is pampered and babied, sweated and scraped, barrelled, planed, sprayedâ€”all in all. treated with more care than a connoisseur gives the patina on a treasured antique.

Before a show arrives at any arena, the basic ice must be prepared for a cast of over a hundred people to go right into rehearsal. An ice surface may vary in thickness from three-eights of an inch to two inches, but in every rink the method of building the ice is similar.

The floor on which the ice lies is on top of a system of pipes. In many rinks the pipes are imbedded in a cement floor which in turn may have a Terraza top. (Terraza is the name of a tile that originated in a town of that name in Italy.) It is on this Terraza top that the ice is made. Water sprayed on the surface of the rink, or Terraza top, becomes ice as the heat is extracted from it. The heat is removed by the circulation of refrigerated brine through the pipe system within the floor.

The cold brine which circulates in the pipes within the floor may have a temperature between 12 and 20 degrees Fahrenheit, varying with local conditions of the rink. The brine itself is cooled and circulated through the pipes from a refrigeration plant at one end of the rink.

Refrigeration in the plant or unit results from the expansion of liquid ammonia into a gas. The cooling chills the brine which is then circulated through the rink pipe system. The ammonia gas is recondensed by the simple method of allowing cold water to flow over the ammonia pipes. The process repeats itself continuously; first liquid ammonia to ammonia gas, then gas back into liquid.

Brine is a strong solution of sodium chloride or common salt and water. Calcium chloride, a white flaky salt, may also be used. Either the sodium or the calcium chloride is used to lower the freezing point of the water in the brine solution.

Basically, this is the method of freezing any indoor rink, or for that matter, any artificial ice, but the rapid manufacture of ice that is ornamental and yet “fast” enough for a two-hour professional show is more complicated.

For the Icecapades, a show which plays to two million people in twenty cities of the United States and Canada, the method of obtaining fast ice quickly has been reduced to an easy system. A quarter to a half-inch of water is flooded on the rink floor and frozen as a foundation for the decorative patterns. .A layer of white paint is spread over this base and allowed to freeze in turn. On this, from a detailed color diagram, a design in powder blue and vermilion is measured off with tape and stencilled on the ice. The paint is then applied, preferably with a spray gun, but a brush can be used.

The paint used on the ice is a water paint, because oil won’t mix with ice any more than it will with water. Fifty-five gallons of a paint powder which was especially developed for this use is needed for the colored water solution with which on the ice base it freezes quickly. When the painting is solid, water is sprayed on the surface of the ice, lightly at first to prevent the running or dissolving of the color. Then heavier sprays are applied until a thickness of approximately one half-inch covers the paint design. Since this covering is of clear water, the colors underneath show through. The covering must be thick enough so that no skate blade will go through to disturb the painting underneath. That the painting should not be disturbed is important for two reasons: one scratch through to the paint would mean a difficult spotting job, and might also mean severe injury to a skater. “Paint can kill skaters,” Norman Frescott, general manager of Icecapades, warns. “Any blemish on the ice might do it. That is why it is so important that the ice be crystal clear and clean.”

The covering of ice must be kept in ideal condition both for rehearsals and for performances. It must be crisp enough to be “fast,” but not so brittle as hockey ice. It must not be wet, yet it must be damp enough to take an edge that will help a skater create a fancy figure three or eight.

Once the perfect “fast” surface has been achieved, the problem of maintaining it begins. Between halves of a performance the ice is “barrelled” and “scraped.” Six men rush out at intermission with large metal scrapers to clean the ice of “snow” (ice shavings) and other debris. They are followed by men with metal barrels on wheels to which sprinklers are attached. In the “barrelling” process, the sprinklers spray hot water over the entire rink to fill the cracks and scratches.

Within ten minutes this breezes and the ice is completely resurfaced with a new and perfect finish ready for the second half of the performance.

Scraping and barrelling must be done at rehearsal intermissions and after rehearsals as well, and, if there is a matinee, during and after it. The continual sprinkling and resurfacing builds up the ice beyond the desired thickness. Three and a half-inch ice is not enough on an outdoor rink, but it is too much indoors.

After the show is over, the ice, like a prima donna, still demands attention. It must be either “planed” or “sweated” to reduce the ice and prevent it from becoming more than two inches thick.

“Planing” is done with a large steel blade pulled by a small tractor. The blade shaves the ice down to the thickness desired. The shaved or “planed” rink is then given a shallow layer of water and the surface is ready for the next rehearsal.

“Sweating” consists of shutting down the refrigerating machines overnight to reduce the ice, much as a housewife will defrost her electric refrigerator. This process is not so satisfactory as planing because it lessens the “tone” of the ice and allows air spaces to form if the sweating is irregular. It must be done, however, if the arena does not own a plane and tractor.

Although the maintenance of ice show rinks is almost an industry in itself, ice showmen argue that steel blades and ice make up an unbeatable precision sport. To get precision in anything calls for the best ingredients available, so every bit of care lavished on the chilly ice floor is a good investment.