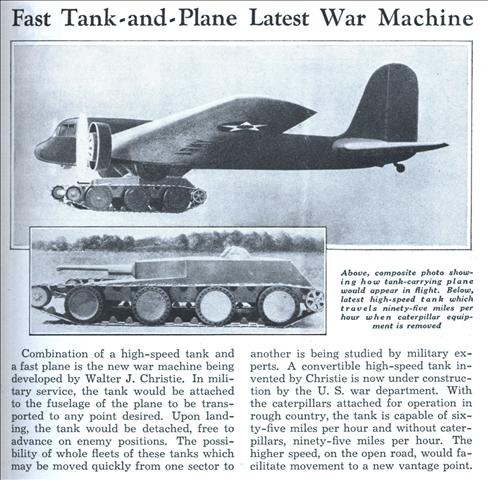 Combination of a high-speed tank and a fast plane is the new war machine being developed by Walter J. Christie. In military service, the tank would be attached to the fuselage of the plane to be transported to any point desired. Upon landing, the tank would be detached, free to advance on enemy positions. The possibility of whole fleets of these tanks which may be moved quickly from one sector to another is being studied by military experts. A convertible high-speed tank invented by Christie is now under construction by the U. S. war department. With the caterpillars attached for operation in rough country, the tank is capable of sixty-five miles per hour and without caterpillars, ninety-five miles per hour. The higher speed, on the open road, would facilitate movement to a new vantage point.