My favorite quote is this caption from the second page: “HAIR is from live European peasant women…” 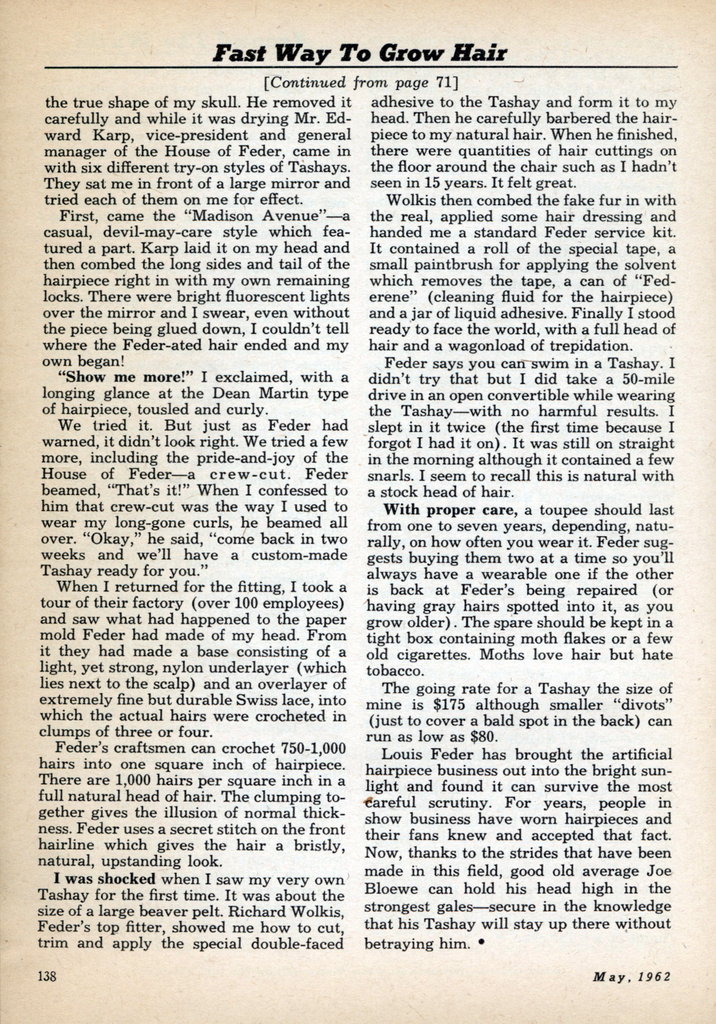 THERE is only one positive cure for baldness and that is the toupee.

Long the butt of jokes and scornful remarks, there was once a “plain brown envelope” sort of mystery surrounding the making, selling, buying and wearing of cranium cozies but all that has been changed. A man named Louis Feder has made them absolutely undetectable and non-skid. Most important of all, perhaps, he has won for them a wide social acceptance.

Mr. Feder presides over the House of Feder in New York City. His hairpieces are known as “Tashays” (not only a word he coined but a device for which he was granted a U. S. Patent).

Like many bald men, I had long toyed with the idea of trying out a skull falsie and one day while talking with MI editor Bill Parker, I mentioned this secret thought. His reaction was, “Well, Bob, why don’t you look into the matter and give us a report?” So, here it is.

I called the House of Feder and made an appointment with Ben Z. Kaplan, executive vice-president and walking advertisement number one for Louis Feder. Kaplan wears a dark brown, flecked-with-gray, crew-cut Tashay. He has a missionary zeal for his work. I put the question to him straight. “How about the chances of this brain beanie” â€” (he winced)â€””blowing off or sliding into the vichysoisse?” He bent his head toward me and said, “Pull it.” I grabbed a handful of his hair and gave it a good yank. Absolutely nothing happened (not even a wince). I was convinced on that score.

Kaplan then took me next door to Mr. Feder’s office to meet the head headman.

He is a genial sort, obviously proud of his calling. He has probably caused more acres of skin to be covered than the Legion of Decency. In the course of an hour or so of talking with him I learned that he gets the hair for his Tashays from various New York importers who have agents traveling all over Europe buying hair from live peasant women. (The hair of most American women is unsuitable, having been dyed or made weak and brittle from permanent waving.) It only takes about an ounce and a half of hair for a man’s Tashay.

I also found out that he keeps an assortment of almost 200 shades of hair on hand in his storeroom and that most, hairpieces contain several different colors (as do most human heads of hair).

After chatting awhile, Feder stood up and walked behind the chair I was sitting in, saying, “Now let us measure the extent of your baldness.” With that he took a grease pencil and traced right onto my head of skin his conception of where my hairline used to be. Then, with calipers, he took various measurements and called them out to an assistant, who made notes of each. He then slapped a wet sheet of blotterlike paper on my head, molding it firmly until it had assumed the true shape of my skull. He removed it carefully and while it was drying Mr. Edward Karp, vice-president and general manager of the House of Feder, came in with six different try-on styles of Tashays. They sat me in front of a large mirror and tried each of them on me for effect.

First, came the “Madison Avenue”â€”a casual, devil-may-care style which featured a part. Karp laid it on my head and then combed the long sides and tail of the hairpiece right in with my own remaining locks. There were bright fluorescent lights over the mirror and I swear, even without the piece being glued down, I couldn’t tell where the Federated hair ended and my own began!

“Show me more!” I exclaimed, with a longing glance at the Dean Martin type of hairpiece, tousled and curly.

We tried it. But just as Feder had warned, it didn’t look right. We tried a few more, including the pride-and-joy of the House of Federâ€”a crew-cut. Feder beamed, “That’s it!” When I confessed to him that crew-cut was the way I used to wear my long-gone curls, he beamed all over. “Okay,” he said, “come back in two weeks and we’ll have a custom-made Tashay ready for you.”

When I returned for the fitting, I took a tour of their factory (over 100 employees) and saw what had happened to the paper mold Feder had made of my head. From it they had made a base consisting of a light, yet strong, nylon underlayer (which lies next to the scalp) and an overlayer of extremely fine but durable Swiss lace, into which the actual hairs were crocheted in clumps of three or four.

Feder’s craftsmen can crochet 750-1,000 hairs into one square inch of hairpiece. There are 1,000 hairs per square inch in a full natural head of hair. The clumping together gives the illusion of normal thickness. Feder uses a secret stitch on the front hairline which gives the hair a bristly, natural, upstanding look.

I was shocked when I saw my very own Tashay for the first time. It was about the size of a large beaver pelt. Richard Wolkis, Feder’s top fitter, showed me how to cut, trim and apply the special double-faced adhesive to the Tashay and form it to my head. Then he carefully barbered the hairpiece to my natural hair. When he finished, there were quantities of hair cuttings on the floor around the chair such as I hadn’t seen in 15 years. It felt great.

Wolkis then combed the fake fur in with the real, applied some hair dressing and handed me a standard Feder service kit. It contained a roll of the special tape, a small paintbrush for applying the solvent which removes the tape, a can of “Fed-erene” (cleaning fluid for the hairpiece) and a jar of liquid adhesive. Finally I stood ready to face the world, with a full head of hair and a wagonload of trepidation.

Feder says you can swim in a Tashay. I didn’t try that but I did take a 50-mile drive in an open convertible while wearing the Tashayâ€”with no harmful results. I slept in it twice (the first time because I forgot I had it on). It was still on straight in the morning although it contained a few snarls. I seem to recall this is natural with a stock head of hair.

With proper care, a toupee should last from one to seven years, depending, naturally, on how often you wear it. Feder suggests buying them two at a time so you’ll always have a wearable one if the other is back at Feder’s being repaired (or having gray hairs spotted into it, as you grow older). The spare should be kept in a tight box containing moth flakes or a few old cigarettes. Moths love hair but hate tobacco.

The going rate for a Tashay the size of mine is $175 although smaller “divots” (just to cover a bald spot in the back) can run as low as $80.

Louis Feder has brought the artificial hairpiece business out into the bright sun-fight and found it can survive the most careful scrutiny. For years, people in show business have worn hairpieces and their fans knew and accepted that fact. Now, thanks to the strides that have been made in this field, good old average Joe Bloewe can hold his head high in the strongest galesâ€”secure in the knowledge that his Tashay will stay up there without betraying him.