Modern Mechanix
Issue: May, 1936
Posted in: General, Origins, Toys and Games
1 Comment on Feeding America’s Appetite for Games (May, 1936)

Feeding America’s Appetite for Games (May, 1936)

Learn all about a new game called Monopoly that is taking the nation by storm. 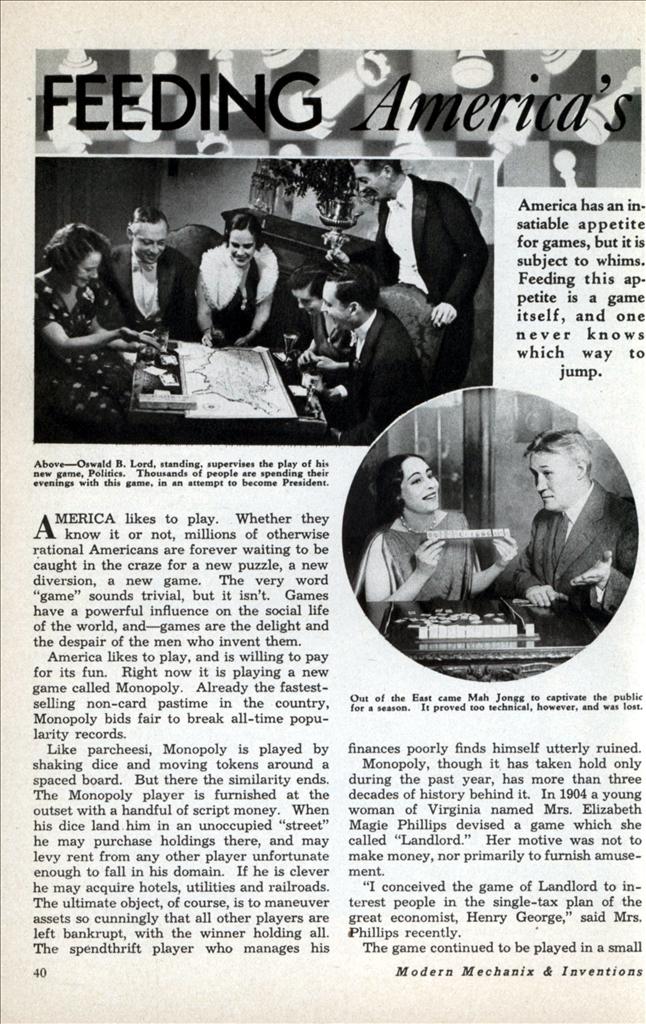 AMERICA likes to play. Whether they know it or not, millions of otherwise rational Americans are forever waiting to be caught in the craze for a new puzzle, a new diversion, a new game. The very word “game” sounds trivial, but it isn’t. Games have a powerful influence on the social life of the world, andâ€”games are the delight and the despair of the men who invent them.

America likes to play, and is willing to pay for its fun. Right now it is playing a new game called Monopoly. Already the fastest-selling non-card pastime in the country, Monopoly bids fair to break all-time popularity records.

Like parcheesi, Monopoly is played by shaking dice and moving tokens around a spaced board. But there the similarity ends. The Monopoly player is furnished at the outset with a handful of script money. When his dice land him in an unoccupied “street” he may purchase holdings there, and may levy rent from any other player unfortunate enough to fall in his domain. If he is clever he may acquire hotels, utilities and railroads. The ultimate object, of course, is to maneuver assets so cunningly that all other players are left bankrupt, with the winner holding all. The spendthrift player who manages his finances poorly finds himself utterly ruined.

Monopoly, though it has taken hold only during the past year, has more than three decades of history behind it. In 1904 a young woman of Virginia named Mrs. Elizabeth Magie Phillips devised a game which she called “Landlord.” Her motive was not to make money, nor primarily to furnish amusement.

“I conceived the game of Landlord to interest people in the single-tax plan of the great economist, Henry George,” said Mrs. Phillips recently.

The game continued to be played in a small way, and in 1924 Mrs. Phillips patented a variation on it which she called “The Landlord’s Game.” This version later fell into the hands of Charles B. Darrow, of Philadelphia. Darrow revised the game and patented it. In 1931 he sold a few sets to friends, and finally interested a large Philadelphia department store in the idea. Parker Brothers, of Salem, Massachusetts, foremost manufacturers of games in the country, at first rejected Monopoly because in their opinion it required too many parts and took too long to playâ€”three hours or more. By spring, however, the game attained such popularity that the Salem firm bought it under the patents of both Mrs. Phillips and Mr. Darrow.

While Monopoly was beginning its amazing rise, Oswald B. Lord, a young textile executive in New York City, set his agile mind to devising a game with a new twist.

“Games have always been something of a hobby with me,” he said. “But it struck me that most new games were not really new at all, but were merely variations on old favorites like parcheesi, chess and checkers.”

Oddly enough, it was while taking a hot shower that Mr. Lord pounced on a subject that offered excellent possibilities for a game. Politics! What with a presidential campaign looming, it looked like a natural. He immediately set to work, and before long had devised a game based closely on a national presidential election.

Presidency Is Goal of Politics

The task in Politics is to general one’s forces cunningly, and to keep careful check on the entire nation so that one may win 266 votes, the electoral majority, and thus be made president.

“I wanted to make a game that would allow sociability,” explained Mr. Lord, “and would thus be a refreshing change from such conversation-killing pastimes as contract bridge.”

Some games allow interest to flag because only one player can play at a time, thus reducing other contestants to mere bystanders until their turn comes. Not so are Monopoly or Politics. While the player is not casting dice, levying rent or winning counties, he will do well to survey the progress of play and adapt changes to his own advantage.

For a time the new game of Politics was jeopardized by a shortage of seemingly trifling thingsâ€”pins. Each game requires a hundred different-colored pins with which players mark off the areas they have won. As orders began to stream in, Mr. Lord suddenly found he needed pinsâ€”millions of them. Soon he had scoured New York and bought every available pin. Still he could not keep pace with demand, and production of Politics was seriously curtailed until arrangements had been made with a factory to supply the vital pins.

The invention of games offers an attractive field for those of analytical minds. What does the public want? One who can answer that question holds the key to riches; but it is a hard question to answer. Inventors who have been successful with one game have found to their chagrin that their next offering grew moldy on salesroom shelves. Yet one can. post a few rules which most successful games have observed. Perhaps the most vital is that the subject of the game must have wide and general interest A game based on thermodynamics could hardly be expected to appeal to housewives.

The balance between chance and skill is an important factor. Too strong an element of chance makes a game that requires little thought, and is consequently relegated to the nursery. Yet at least a small ingredient of chance is essentialâ€”it eggs, one on to take risks, and produces greater excitement.