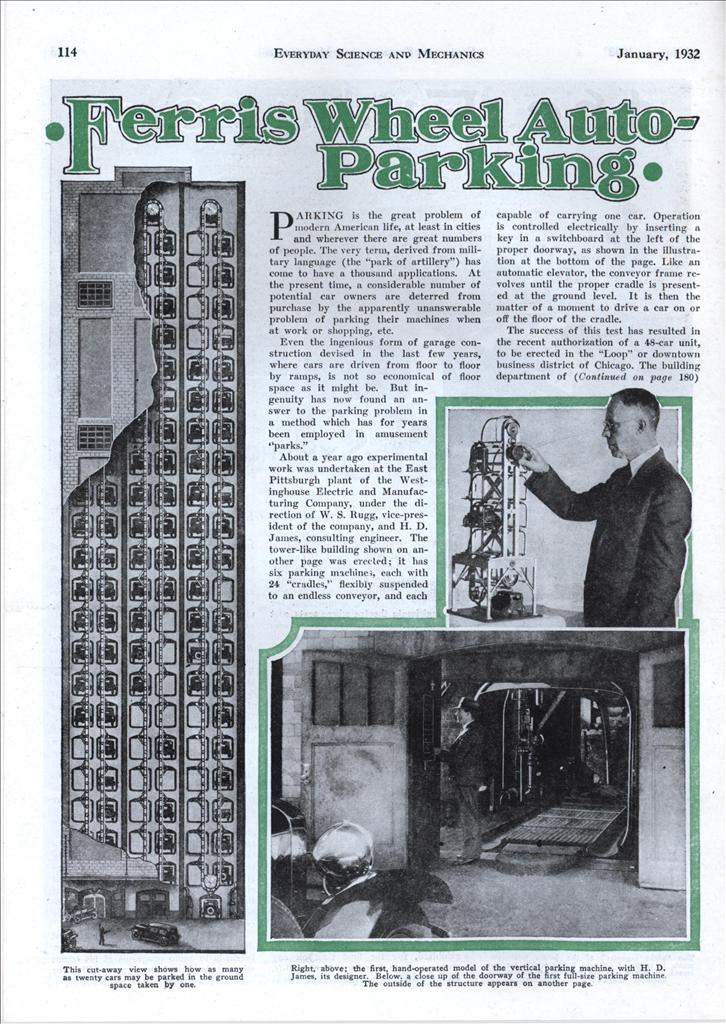 PARKING is the great problem of modern American life, at least in cities and wherever there are great numbers of people. The very term, derived from military language (the “park of artillery”) has come to have a thousand applications. At the present time, a considerable number of potential car owners are deterred from purchase by the apparently unanswerable problem of parking their machines when at work or shopping, etc.

Even the ingenious form of garage construction devised in the last few years, where cars are driven from floor to floor by ramps, is not so economical of floor space as it might be. But ingenuity has now found an answer to the parking problem in a method which has for years been employed in amusement “parks.”

About a year ago experimental work was undertaken at the East Pittsburgh plant of the Westinghouse Electric and Manufacturing Company, under the direction of W. S. Kugg, vice-president of the company, and H. D. James, consulting engineer. The tower-like building shown on another page was erected; it lias six parking machine;, each with 24 “cradles,” flexibly suspended to an endless conveyor, and each capable of carrying one car. Operation is controlled electrically by inserting a key in a switchboard at the left of the proper doorway, as shown in the illustration at the bottom of the page. Like an automatic elevator, the conveyor frame revolves until the proper cradle is presented at the ground level. It is then the matter of a moment to drive a car on or off the floor of the cradle.

The success of this test has resulted in the recent authorization of a 48-car unit, to he erected in the “Loop” or downtown business district of Chicago. The building department of that city has decided that the parking machine, constructed of steel, is not a “building,” in the legal sense; and that the city has the power to utilize streets and alleys, without prejudice to the passage of ordinary traffic, for overhead parking.

It is pointed out, also, that the same system may be applied to an underground installation, if conditions make this more desirable. Such vertical parking machines may be conveniently located in alleys, where the flow of traffic is limited and local.

The success of this idea will, undoubtedly, increase greatly the value of cars to city residents; stimulate downtown shopping; and speed up traffic, by clearing the streets of the numerous parked cars which often reduce the lanes of traffic to half their proper efficiency.