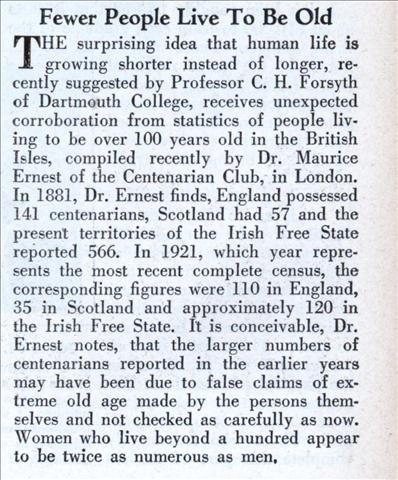 Fewer People Live To Be Old

THE surprising idea that human life is growing shorter instead of longer, recently suggested by Professor C. H. Forsyth of Dartmouth College, receives unexpected corroboration from statistics of people living to be over 100 years old in the British Isles, compiled recently by Dr. Maurice Ernest of the Centenarian Club, in London. In 1881, Dr. Ernest finds, England possessed 141 centenarians, Scotland had 57 and the present territories of the Irish Free State reported 566. In 1921, which year represents the most recent complete census, the corresponding figures were 110 in England, 35 in Scotland and approximately 120 in the Irish Free State. It is conceivable, Dr. Ernest notes, that the larger numbers of centenarians reported in the earlier years may have been due to false claims of extreme old age made by the persons themselves and not checked as carefully as now. Women who live beyond a hundred appear to be twice as numerous as men.