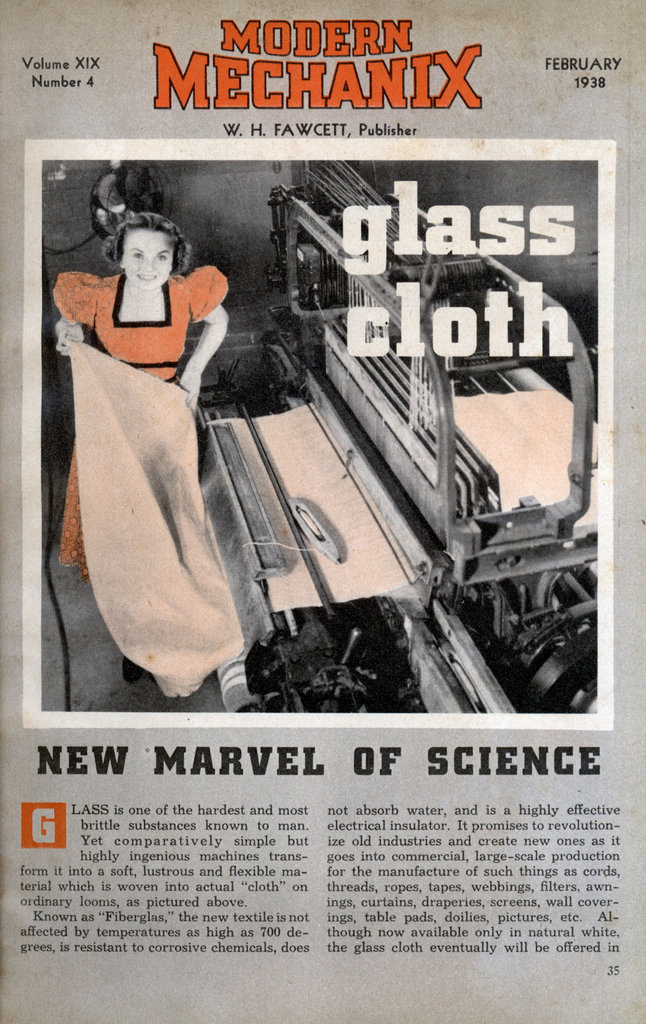 GLASS is one of the hardest and most brittle substances known to man. Yet comparatively simple but highly ingenious machines transform it into a soft, lustrous and flexible material which is woven into actual “cloth” on ordinary looms, as pictured above.

Known as “Fiberglas,” the new textile is not affected by temperatures as high as 700 degrees, is resistant to corrosive chemicals, does not absorb water, and is a highly effective electrical insulator. It promises to revolutionize old industries and create new ones as it goes into commercial, large-scale production for the manufacture of such things as cords, threads, ropes, tapes, webbings, filters, awnings, curtains, draperies, screens, wall coverings, table pads, doilies, pictures, etc. Although now available only in natural white, the glass cloth eventually will be offered in a wide variety of permanent colors for every decorative purpose.

Fiberglas is made by two methods developed by the Owens-Illinois Glass Company at Newark, Ohio. One is known as the “continuous filament” process, the other as the “staple fiber” method. In both processes glass marbles about 3/4-inch in diameter are fed into electrically-heated furnaces which have a trough or V-shaped bushing made of costly metals of a higher melting point than glass. The molten glass, entering the open end of the bushing, is “drawn” downward by the force of gravity in the continuous-process method, the glass emerging from 102 tiny holes in the bottom of the bushing. These fine filaments, almost too small to be seen with the naked eye unless light strikes them at critical angles, are combined to make one thread-like strand only .024 inch in diameter, for winding on spools. The latter are transferred to machines for fabrication into tapes and cloths. A single marble, weighing only 1/4-ounce, produces the incredible amount of 90 MILES of glass fiber, so finely are the threads drawn.

In the staple-process, the molten marbles are forced downward through tiny holes in similar bushings, but instead of being “drawn,” they are blown downward by blasts of steam under high pressure. Passing through a burst of flame which removes the moisture from them, the fibers gather upon and are drawn from a revolving drum, to be wound on revolving spools, which are taken to textile spinning machines for twisting and reduction to thread.